Posted on September 23, 2016 by Brad Christensen

You don’t need reasons to travel.  Your own desire is reason enough, but I spent some time reflecting on some of what travel has provoked for me and I felt like it was worth sharing.

It was a guys’ trip.  We had spent the morning climbing to the rim of the Volcan Santa Ana, the tallest of the chain of volcanoes in El Salvador, among which was perched the airy home and picturesque property where we were now resting.

We were peacefully enjoying the scenery when Lionel, the smiling, pudgy-faced son of the property’s caretaker, interrupted our repose with the roar of a chainsaw. As a 3-year-old, he wasn’t really entrusted with that kind of power tool, but it didn’t stop him from make-believing.

His lips generated the most realistic sonic recreation, and it was clear that he was no amateur, having followed his father around the property to perform maintenance for the better part of his 3 years. At first we were amused, but by the time we realized his sound effects went so far as to mimic the noise of cutting through a branch, we were in stitches.

Lionel and his motormouth chainsaw in El Salvador gave us reason to laugh.

The San Blas Islands on the Caribbean side of Panama are the home to the Kuna-Yala indian people.  I’d managed to get my entire family to this dreamy archipelago of white sand and palm-dotted islands and we spent two days exploring the crystal blue waters.

Most of the islands are completely uninhabited, yet those which are, are densely populated. So on the last day there, on our return trip to the mainland, we stopped off to see a reed-and-palm metropolis.

In the alleyway, our kids were greeted by colorful-bead-covered children and were giddy to reveal that they’d brought a game of Candyland to play and give away. It was plopped atop a makeshift table and instantly there were childish squeals of delight as they played the one game they could without the possibility of communication.

Meanwhile, I was fixated on a leopard skin which was drying outside one of the huts.  I approached the woman inside and asked her who had killed the animal (in Spanish). She responded that it was her brother-in-law, who had shot it with an arrow on the mainland.

Our conversation carried on until I noticed that there was a boy, lying atop a tablecloth on the bed behind her, with an ugly swollen arm under which was some kind of pail filled with roots and water.  I asked what had happened and she explained that he’d been playing and broken his arm.  For two weeks, she had been treating him by dousing the arm with this root-water concoction. He smiled at me and then grimaced with pain. I was instantly overcome with emotion.

I couldn’t help but cry there with that little boy in the Kuna-Yala hut in the San Blas Islands. 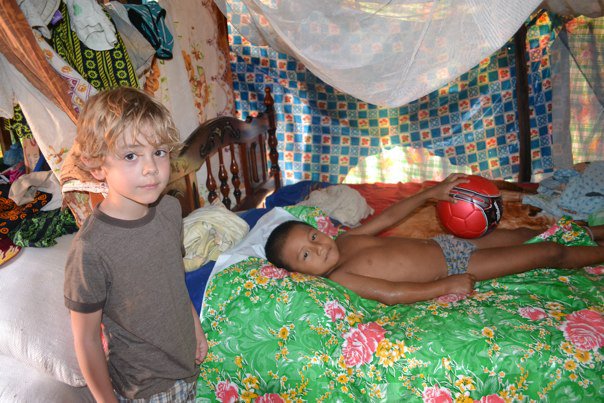 My son, Miles, with a Kuna Yala indian boy

The sun burned down as we passed through the town of Interlaken – between two beautiful lakes in the Bernese Oberland region of Switzerland. Ahead were the snowy peaks of the Swiss Alps, and there was nothing disappointing about their grandeur.

Cliffs began to rise all around us, yet the road we followed stayed relatively flat as we reached the green-carpeted Lauterbrunnen Valley. We drove until we could no longer resist the urge to free ourselves from the confines of the car, and when we did, it was the most magically breathtaking moment.  More than 70 waterfalls spill edoff these sharp ridges, some splashing to the ground, some completely disintegrating into mist. An alpenhorn rang  in the distance, echoing off the walls.

Like no place else on earth, the Lauterbrunnen Valley will take your breath away. 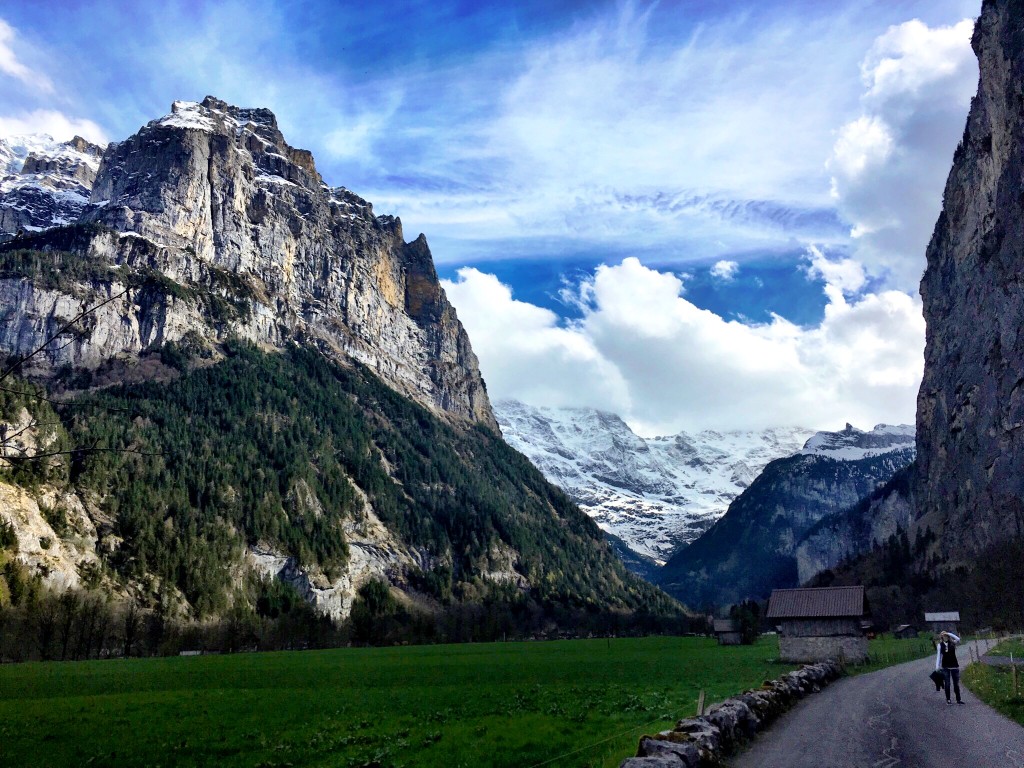 The Lauterbrunnen Valley will take your breath away

My wife and I tend not to celebrate anniversaries on our anniversary date.  It’s mid summer, and I’m content to spend my summer weekends in Idaho, but shortly after our 10th anniversary, I booked us a trip to Italy.  The entire trip was full of romantic moments – the echo of clicking heels on vacant alleyways in Venice, cloud-gazing  in the sloped Piazza del Campo in Siena, a morning meal on a picnic table outside a Tuscan farmhouse, but none of these were quite as love-provoking as the seaside walk in the Cinque Terre town of Riomaggiore.

We found a bench where we could sit and talk.  We reflected on a decade of memories and admired the pastel hues of the buildings hanging on the cliffside  while waves crashed against the rocks.  Dozens of locks adorned with hearts and initials clung to a wire fence, where other lovers had “locked their love” in this perfect place.

When our conversation reached an emotional climax, I arose and revealed a lock of my own, which I attached to the fence and locked with a key. Then I promptly flung it into the ocean and turned back to find myself in the loving embrace of my soulmate.

It was a passionate moment, wrought by the romantic setting of Riomaggiore. 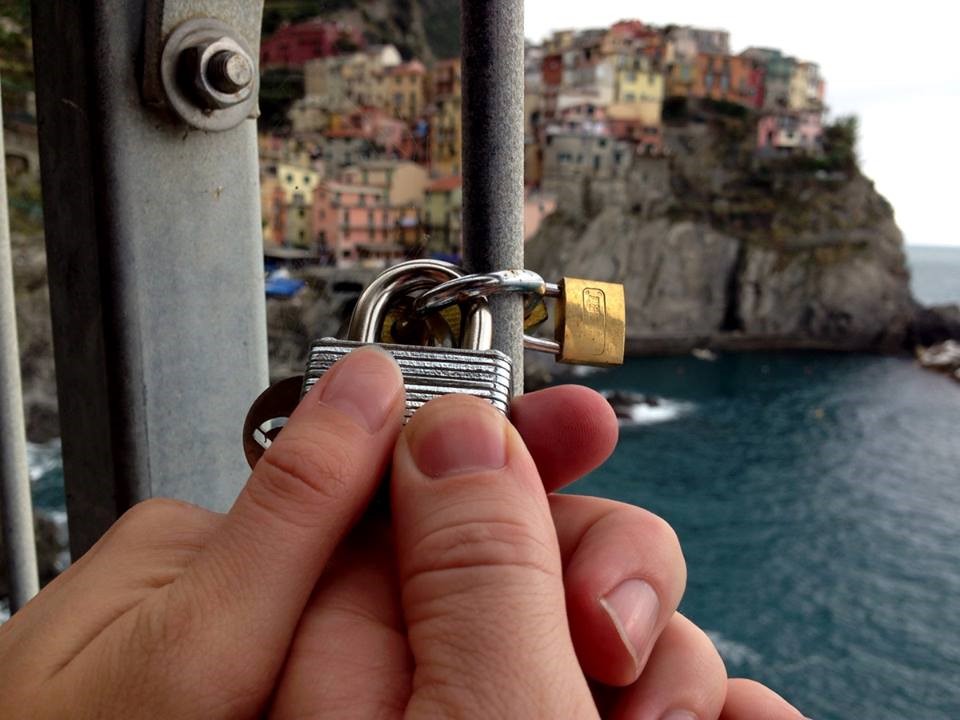 We locked our love in Riomaggiore

To Give (and to Receive)

In the aftermath of the 2010 earthquake in Haiti, I joined a relief effort that would radically change my perception on life.

We flew into the Dominican Republic, loaded a van with construction equipment, food, and other needed supplies, and drove across the border.  As we entered, I found the strangest juxtaposition of emotions – raw, real suffering – people hurting, scared, worried, and yet there was an undercurrent of hope, excitement, and even joy.

We spent 11 days helping rebuild, reinforcing failing structures, providing materials to schools and orphanages, feeding people who were starving, but more importantly than all that, making friends.

To this day I carry strong friendships with people in Haiti – people who have truly endured an incomprehensible level of suffering. I’d like to think that I helped them – that leaving literally empty-handed, having given everything I had to people who needed it far more than I, was a gift to them, yet it was a gift to me. 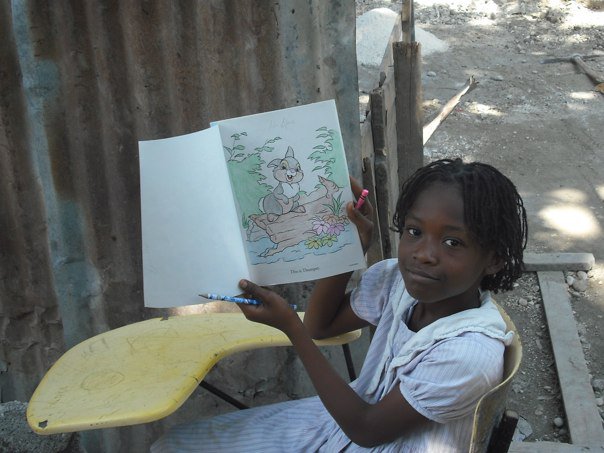 This darling girl was entralled with her coloring book

The excitement and adventure of travel can enhance a relationship like nothing else.  Nicole and I had traveled mostly alone with a few exceptions for a number of years.  We had extended plenty of invitations but synchronizing schedules can be challenging and we never had been able to make it work.

Our flight arrangements differed, so they had already been in Dublin for a day when we arrived.  We picked them up at their hotel and set off to Galway. Over the next nine days in conversations at quaint pubs, through drizzling rain in castle ruins, and beside peat-moss fires in adorable cottages, our casual friendship grew into deep connection.

In the homeland of W. B. Yeats, we recognized the authenticity of his belief that, “There are no strangers, only friends who’ve never met.” 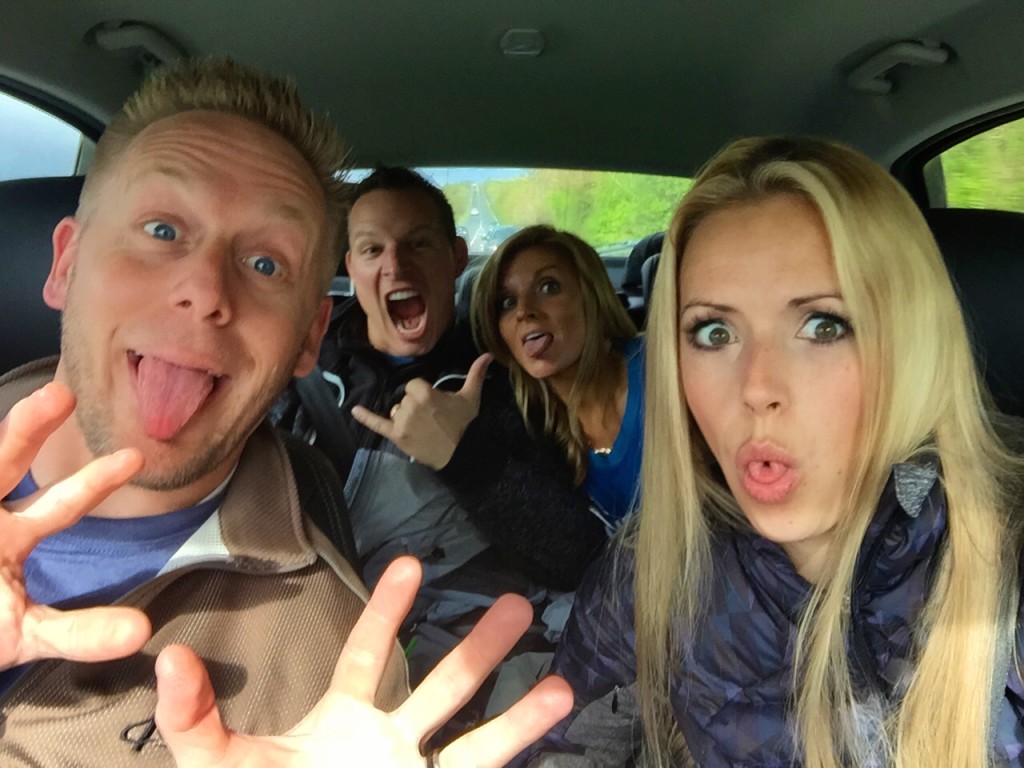 If you had told me that the most delicious thing that I would ever taste would be in Germany, I’d have scoffed at you… and yet it’s true.

Our itinerary that day took us from the historic Roman Irish Baths in Freidrichsbad through the Black Forest to the cuckoo clock capital of Triberg. After wandering through the misty fog that hung over the Mummelsee lake, our journey took us along winding roads through tiny towns until we found the Black Forest Open Air Museum – a sort of living history display of the buildings and lifestyle of the people of the Black Forest throughout the ages.

When we’d had our fill of the crafty architecture and the quaint farm culture, we wandered out to a roadside restaurant where we could get our fill of the traditional  Black Forest cake we’d heard so much about. Sadly, it was only mediocre, but one among us (my wife, to be exact) had the sensibility to order the apple crumble cake.

While we were “meh-ing” over the chocolate cherry combo, she was “mmmm-ing” over the pastry apple combo, and it only took me one bite to find out why.  Tender, flaky crust and crumbles, tart apple filling, it was the epitome of sweet and salty and the definition of moist. I ordered my own. Savored it. Then ordered another and savored it, too.

In the Black Forest, we discovered an incomparably delicious taste. 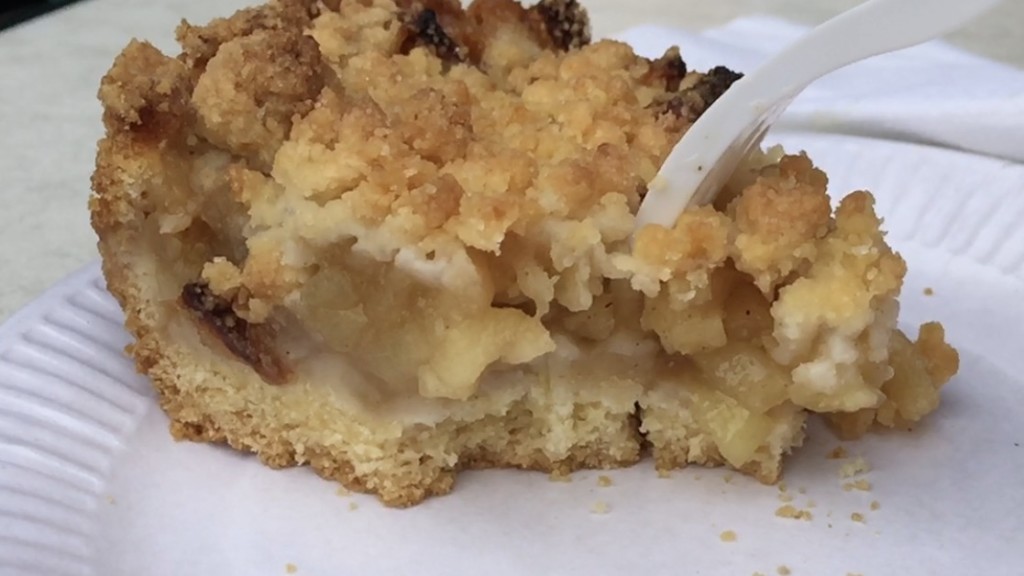 Life is hustle is bustle, and travel can be, too.  But once in a while you need to make some time to relax, to re-frame, and to refresh your outlook on life.  One way to do that is by reconnecting with nature, and that’s precisely what I found in the jungle of the Dominican Republic.

My first day there was actually chock full of adventure – an insanely exhilarating zipline and a rope swing directly into a waterfall pool really took it out of me, but by the time that was over, I was ready to take it easy.

I was staying at the Dominican Tree House Village, a heavenly retreat from everyday life. I watched a couple doing yoga, which was actually more relaxing than doing it myself since I’m not all that flexible. I wandered through the grounds, admiring colorful flowers, hearing the trickle of a stream, all the while following a hummingbird.  And though the daylight gave me so much to peacefully enjoy, it was the nighttime that inspired me.

As I laid down to sleep, I couldn’t help but hear the cacophony of sounds – so loud in some ways, yet so serene in others.  Tree frogs chirped, exotic birds called, and crickets creaked.

It was a symphony in the Dominican jungle, and I melted into my comfortable bed and truly relaxed.

To the roof of Africa. That was our objective as we set out from the humid jungle of the lowest slopes of Mount Kilimanjaro, where monkeys swing on vines and dense underbrush crowds the trail.

It was 2010 and a group of co-workers and I set out to conquer Africa’s tallest point. Over the days we climbed, the landscape gradually thinned along with the air as we trudged through every climate zone.

What started as a challenge became a trial and what was a trial, became a struggle. It demanded everything we had, breaking us down with steep inclines and intolerably disgusting pink african hot dogs. Yet then it rewarded us with the most marvelous sunsets and above-the-clouds vistas.

Mount Kilimanjaro allowed us to conquer – to feel like victors. 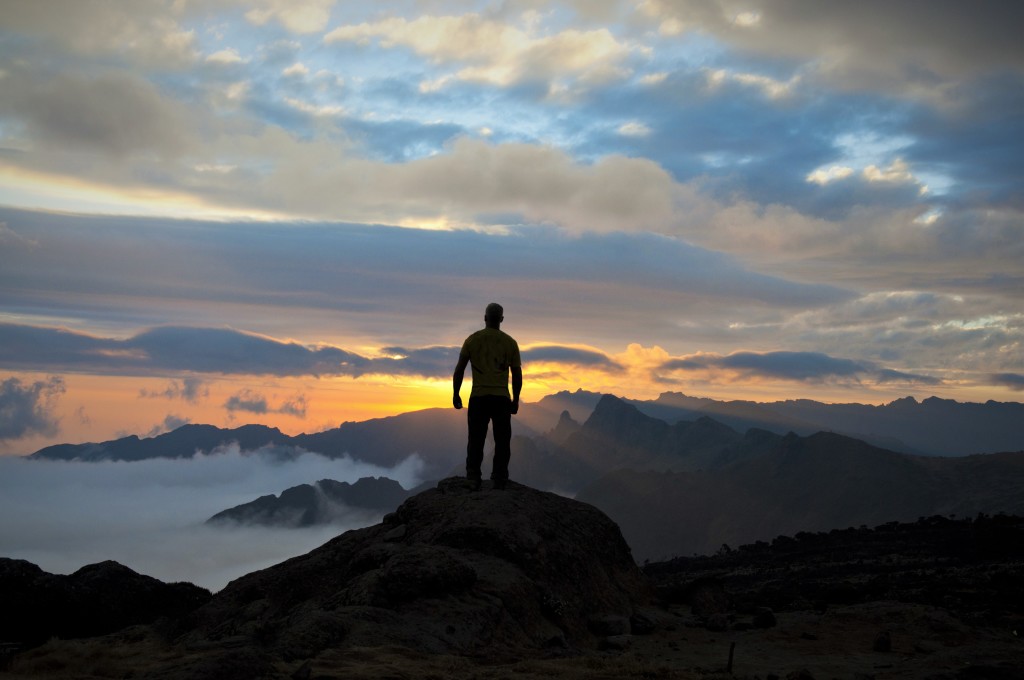 My oldest son has little appreciation for one of my passions – sports, so when I caught a glimmer of his interest in another of my passions – politics, I seized on it and planned us a father/son trip to Washington DC.

We visited the office of Governor Dirk Kempthorne, a former US Senator, Idaho Governor, and Secretary of the Interior, who had held Westley when he was only three months old and now found him sufficiently bright to sit beside him and converse.

We toured the US Capitol building, the Supreme Court, and other iconic sites before departing the city to our countries earlier roots in the Virginia countryside.  We strolled through the rooms of Thomas Jefferson’s home and the streets of Williamsburg, and it was there that I felt the surge of hope.  Westley, just ten years old, plopped himself down aside a seated statue of Jefferson, presumptive of his own equality to this man who was the author of human equality.

I sat and stared, in awe of my son and his swagger, and hoped for the best for him there in the streets of Williamsburg. 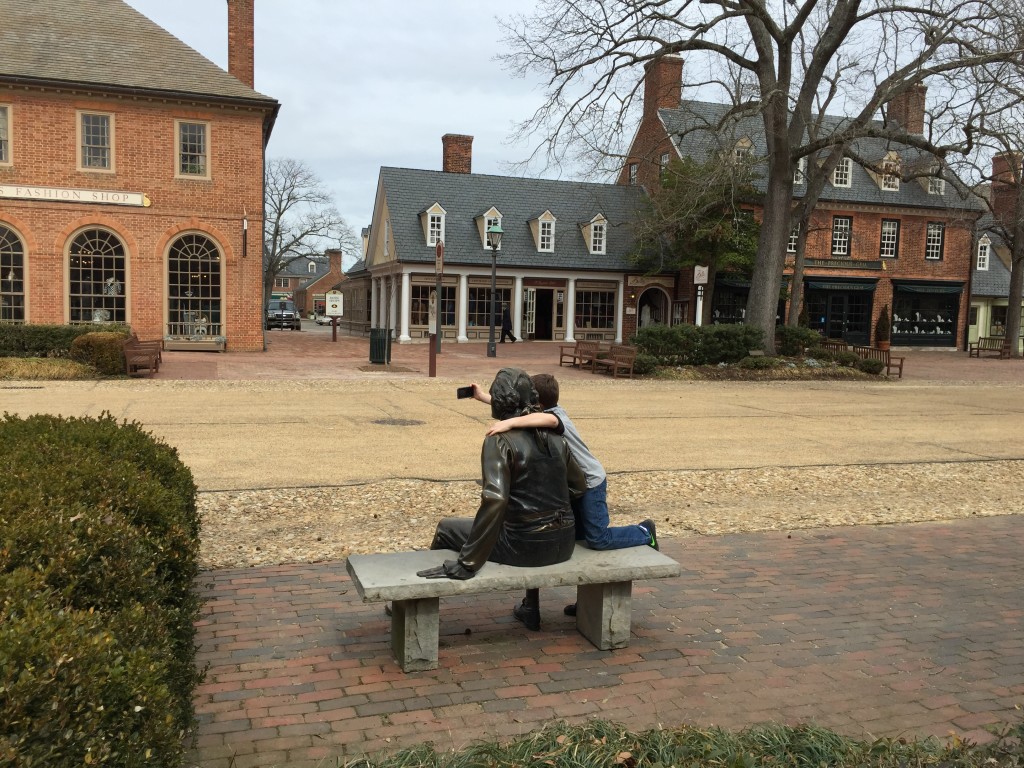 This entry was posted in Domestic travel, Europe, Family Travel and tagged reasons to travel, travel, Vacation, vacation time, what to do on vacation. Bookmark the permalink.