Posted on October 8, 2015 by Brad Christensen

I spent several weeks of every childhood summer in the Targhee National Forest in the shadow of the three peaks of the Tetons. Countless evenings I watched, transfixed, as the setting sun cast a warm orange glow on the sharp granite peak of the tallest of them – the Grand Teton.

I told myself, “someday I’ll stand at the top of it. Someday I’ll see what it sees – hundreds of miles in every direction.” I’ve spent twenty years saying that.

Earlier this summer, I was camping nearby and watched as a beautiful combination of a pink sunset and a brilliant rainbow stretched across the familiar backdrop.  Table Mountain was visible – a summit I’d achieved many times, but the Teton itself remained hidden behind the clouds, a metaphor for the way it had always eluded me.  Again I found myself craving its conquest. “This is the year,” I thought. 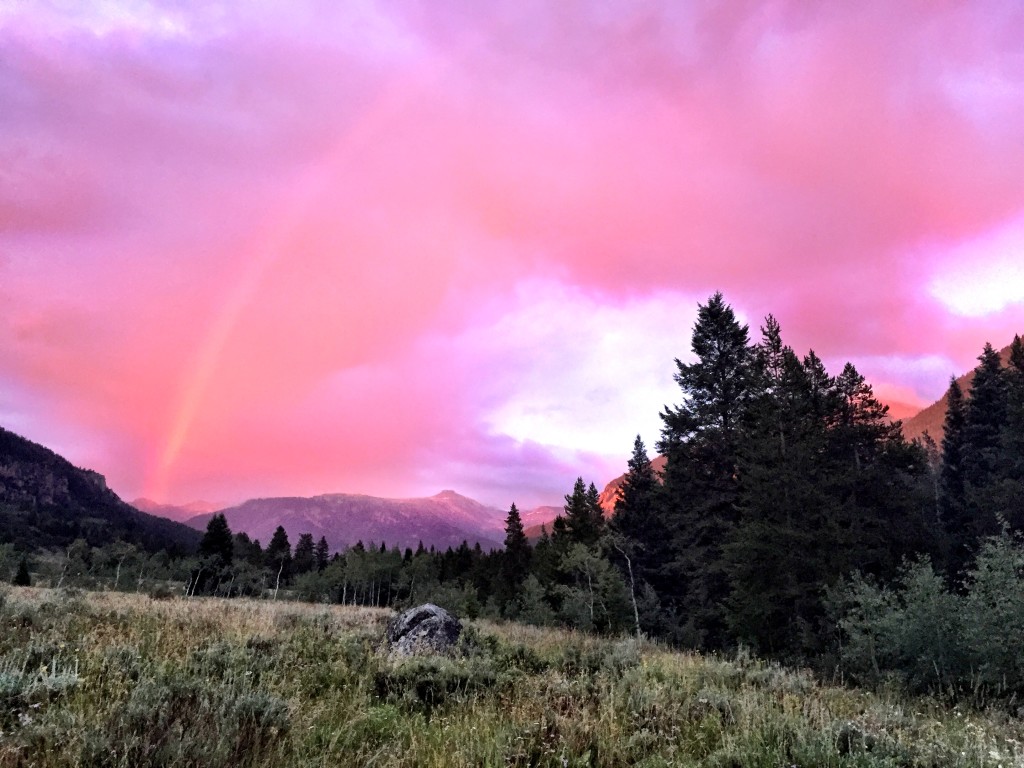 So the first week in September, when my neighbor, Victor, who has climbed the Grand Teton many times sent me an email fishing for interest, my response was quick and clear, “I’m in. Say when.”

The next week brought a perfect weather forecast – a critical factor for a peak that’s often shrouded with thunderstorms. We settled on taking the Owen Spalding route and the “car-to-car” schedule – opting to make the 20 mile trip in a single day, rather than bring camping gear and stay overnight (a decision I’d later regret). I recruited my brother Sheldon to join us, and at midnight, the three of us met to divy up the climbing gear and pack our bags.

By 2:00am we were on the trail with nothing but headlamps and stars to light our way.  The first few miles had little incline, so the conversation was great and the going was easy, but it wasn’t long before a brutal set of switchbacks changed all that.

After about 5 miles, the trail disintegrated into fields of massive boulders which we climbed over with enthusiasm and vigor. I was just giddy to finally be approaching the towering mountain I had admired since childhood.

“Giddy” quickly changed to “grumpy” as the ascent sharpened as we climbed out of Garnet Canyon.  We were a little over four hours in and the sun was just starting to rise, which gave us a great excuse to pause and enjoy the moment. The grumpy went away… for the time being. 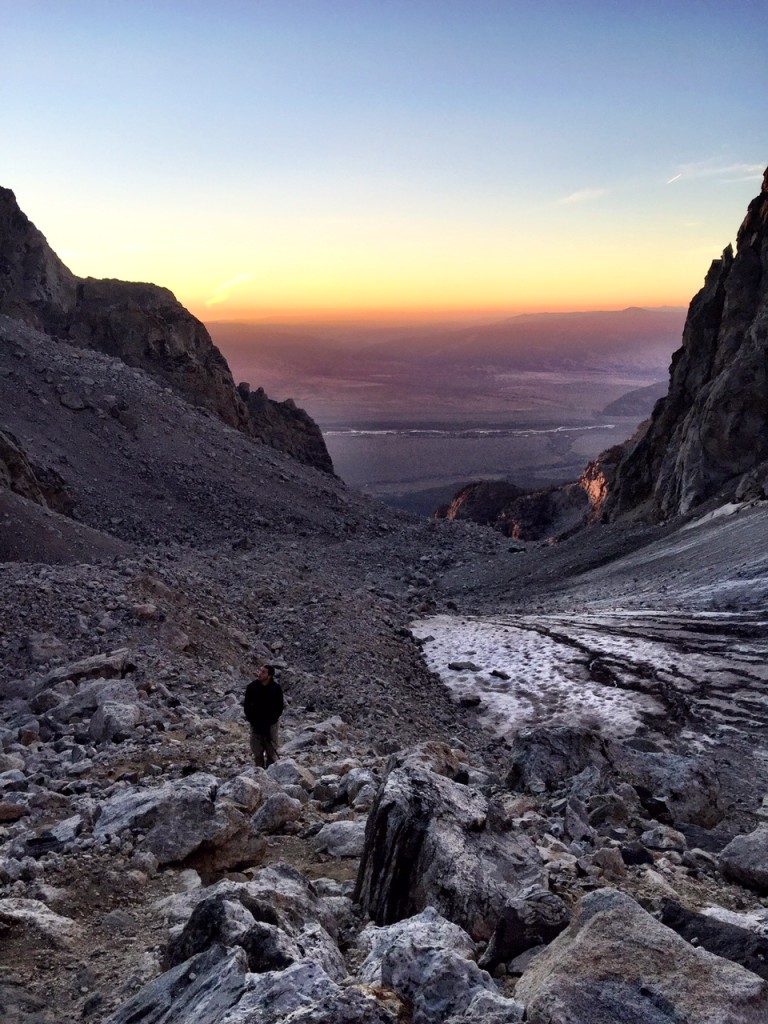 The sun came in handy as the next stretch to the top of the lower saddle was a complicated fixed-rope climb.  We pulled ourselves up the line and arrived at the saddle – about 10,000 feet – right around 7:30am.

From there the summit was visible and didn’t seem too intimidating – proof that things aren’t always as they seem.  The incline steepened and the trail often disappeared into slippery shale. If that weren’t bad enough, the thin air also entered the equation and suddenly every step was burdensome. 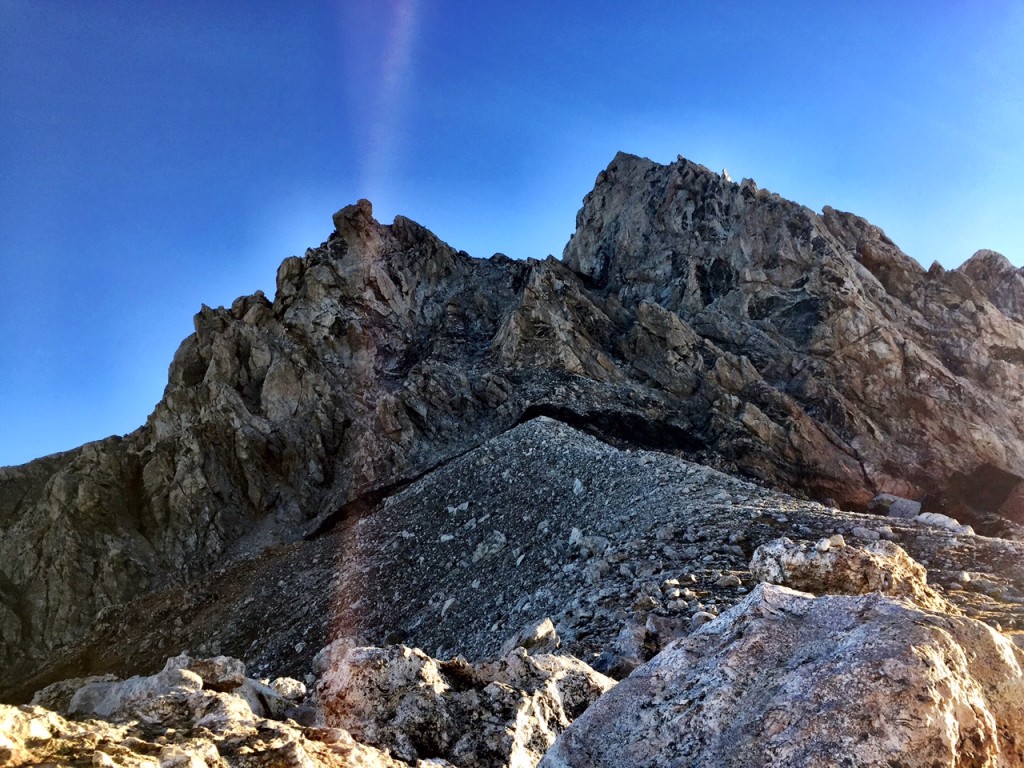 We clambered on all four limbs until we came to “the eye of the needle.” On other hikes I’ve heard spots like these referred to as “fat man’s misery.” You get the point… it tested our flexibility.

Shortly thereafter we got our first taste of “exposure” – the unprotected risk of falling.  Even though the potential drop was a mere 30 feet, the adrenaline kicked in as we gripped a ledge and eased along it. Sheldon, in particular, had a hard time with the risk of falling.  The danger combined with exhaustion was wearing on him.

Another steep shale slope awaited us en route to the upper saddle and where before I couldn’t help but notice the beautiful sparkle of the various colors of granite, now I couldn’t have cared if it were sparkling with gold.  I just wanted to be up there.

Reaching the upper saddle at 13,000 feet was satisfying, but what awaited us was terrifying.  If any one of us had suggested we bag it and go back down, the other two would undoubtably have also conceeded.  But when the temptation arose, it was pushed away with a chant of solidarity, “we’ve got this.” 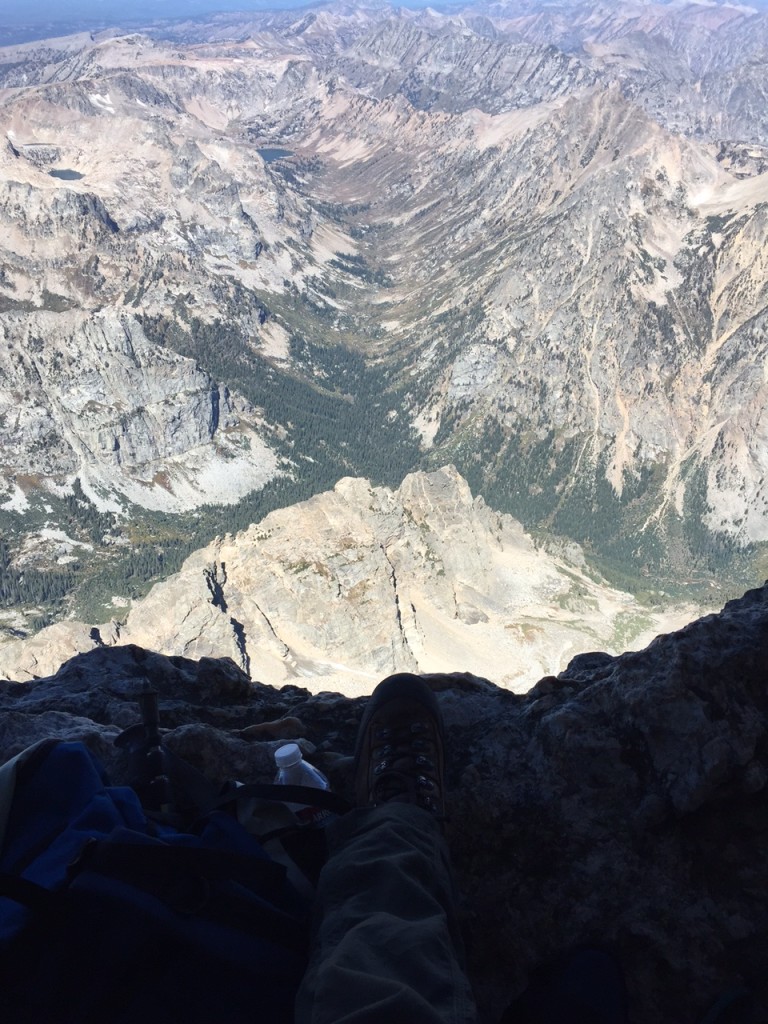 The task at hand was now to work our way across two roped traverses – one named “the belly roll,” and another named “the crawl.” With the wind now whipping wildly, it had gotten cold and the slow going only made it worse. Even still, we made it across, and then worked our along another roped route, this time a vertical chimney.

From there we roped the three of us together and made our way along the catwalk – a seemingly unending stretch of more dangerous climbing at altitudes that made even small movements taxing.  By this time emotions had kicked in as we realized we were almost to the summit.  What had been an incredibly difficult climb was almost over… well, half-over. We still had to get down.

The three of us all got a little teary-eyed as the peak came into sight. It was a combination of relief and reward – pride in having achieved it.  We pulled ourselves over that last edge and onto the 13,770 foot platform that rises above everything else for hundreds of miles in every direction. We allowed ourselves to enjoy the moment and celebrated with wheat thins and bacon cream cheese. A fitting celebration. 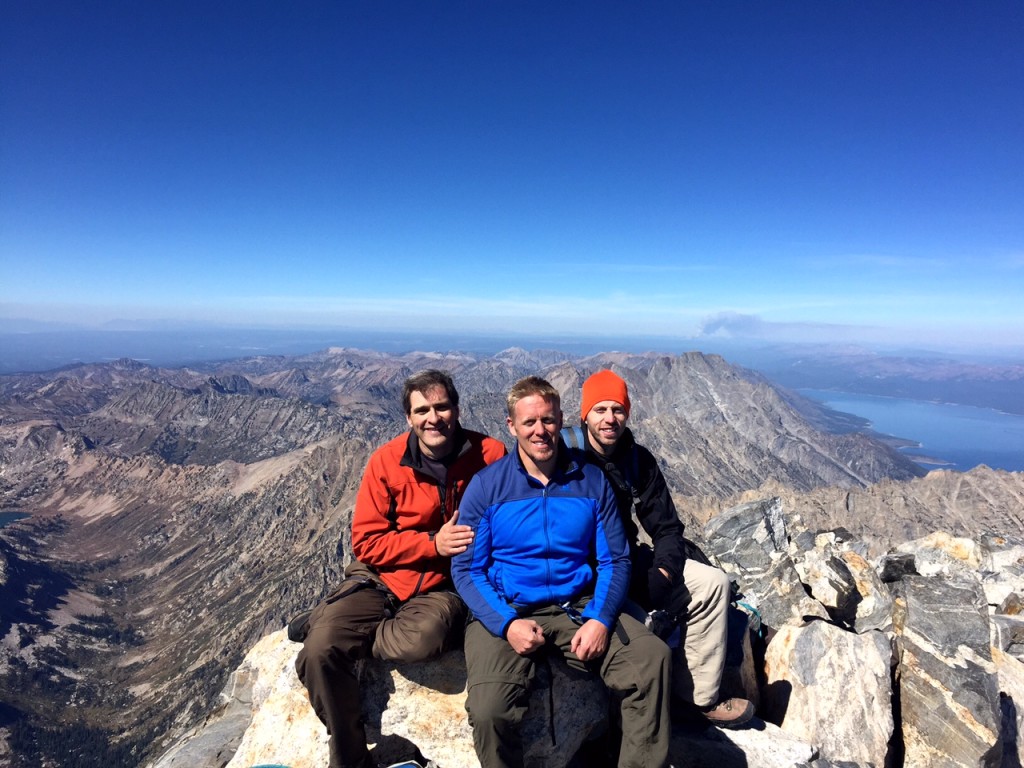 When we’d had our fill, we scrambled down to the first rappel pitch and tied ourselves in. Going down was infinitely easier, albeit nerve-wracking. A little more downclimbing and another rappel took us back to the upper saddle. 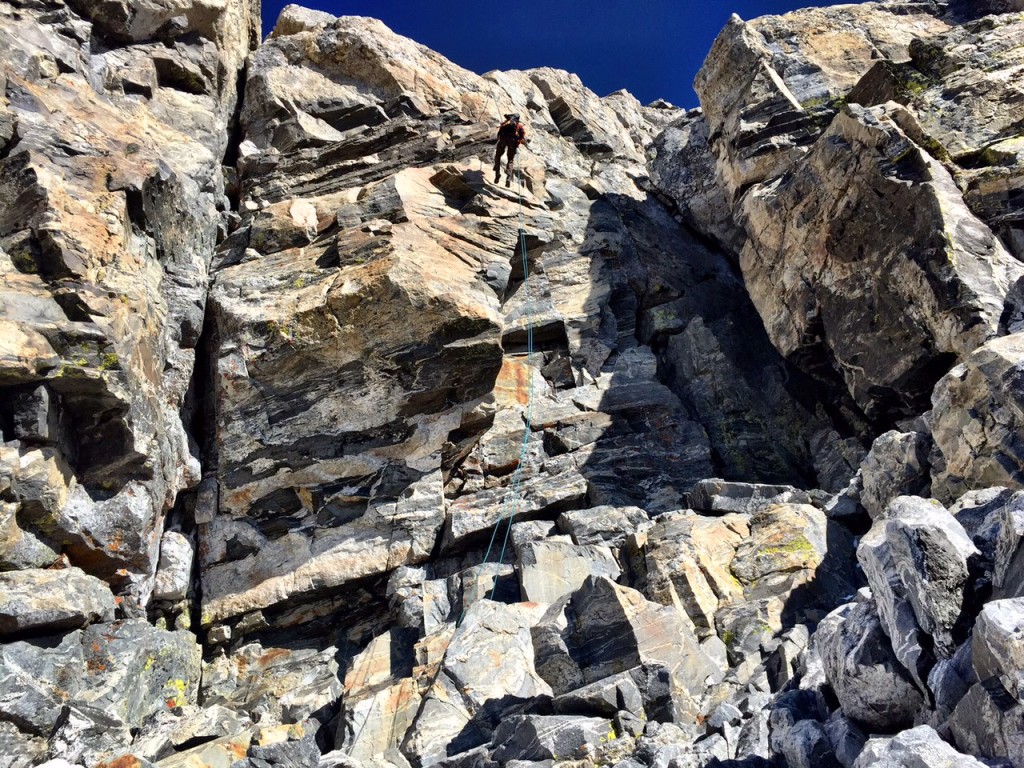 Going down had the effect of increasing our oxygen intake and we felt it right away, but whatever joy it brought was killed by the realization that we still had almost 10 miles to hike and it was almost 5:00pm.  I started wondering if we were even going to make it off the mountain.

Still, somehow we found it possible to descend and by 7:00pm we were back at the lower saddle.  At this point we acknowledged that without a little rest, we weren’t going to be able to make it.  Another climber extended the courtesy of borrowing us his tent and pad and we took a dreamy one hour nap. We barely made it back to the fixed rope line before dark.

Again the headlamps led our way and we made our way through hundreds of boulders – leaning heavily on our walking sticks.  Back down to the switchbacks which somehow now seemed even longer.  Our steps were more plodding than hiking, throwing one leg in front of the other and catching ourselves before we fell.  The bottoms of my feet felt like a single massive blister and every part of me ached.

The last five mile stretch was never-ending as I complained, out loud, to no one in specfic. I moaned and groaned and carried on, powered only by an urgent desire to get back to the car.

When we finally saw reflectors in our headlamps I was more overjoyed than I was upon summiting.  It had been a intense, grueling experience, but one that was worth every minute of pain.

I had triumphed the trials of that preeminent peak. I saw what it sees and breathed what it breathes. I climbed the Grand Teton.