Free Travel Without the Credit Cards

Posted on September 8, 2014 by Brad Christensen

Not all of the 2 million frequent flyer miles and points I have at the ready to execute on a myriad of adventures were accumulated by signing up for credit cards. Certainly the majority of them have come that way and they’ve never come cheaper or easier – as I only use my credit cards to make purchases I’d make anyways – but some of them have come from special promotions like the one I’m about to share with you.

We canceled our DirecTV service about 6 months ago, and until this weekend, we haven’t missed it a bit.  But as football season started up again, I find myself craving the availability of college and NFL football games.  So far I’ve watched more in person than I’ve watched on TV – part of my incentive in canceling the service in the first place was to save enough money to buy season tickets. But I’m already wondering if I might need to re-up with new service from DirecTV, and when I got this offer emailed to me, It made the attraction that much stronger.

The offer that’s so tempting is that right now signing up for DirecTV could get me 25k AA points.  That in and of itself is a very appealing opportunity as I’ll show you in a moment what 25k AA points could get you. But before I get to that, consider that in addition to the free travel, they’re also offerring NFL Sunday Ticket for free, along with the Genie DVR, and 3 months of Cinemax, HBO, and Showtime. Geez, they know how to make it all the more exciting to a guy like me.

And before you write this off and think, “Oh I already have DirecTV, or Dish, or whatever,” you ought to know that changing these things – even in creative ways like re-upping with the same provider but using your spouse’s name to get a better price and benefit, is far more common than you’d think. 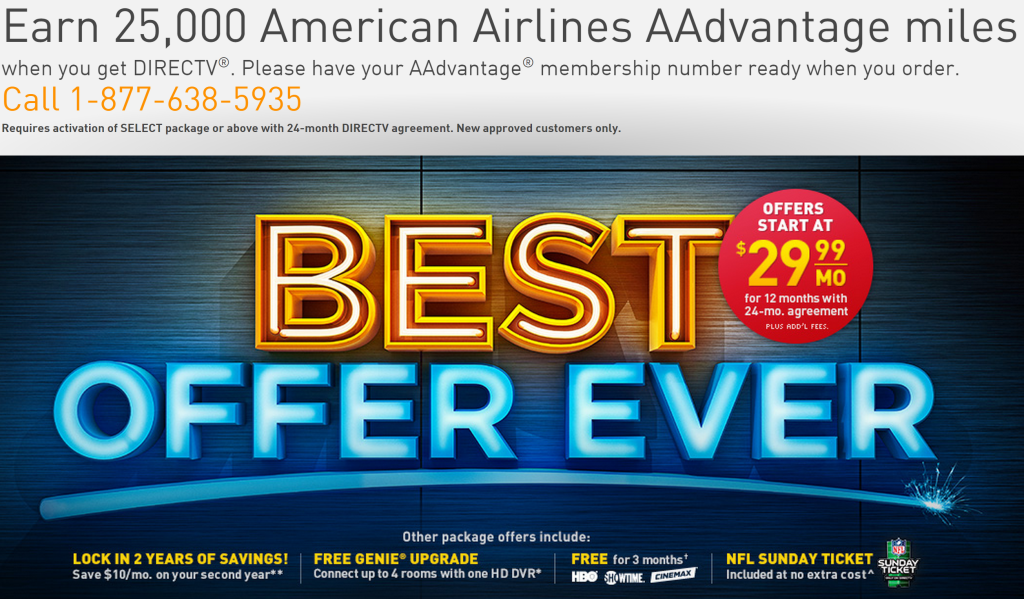 But for those of you who are less into the points and miles thing – let me show you what an awesome deal this could work out to be.

What does 25k AA points get me?

But what will it cost to sign up for DirecTV?

Don’t quote me on this, but I read that the minimum would be $29.99/mo – and I assume with fees it would be at least $35.  I think it’s also safe to assume that for the second year of the two year commitment, it would be closer to $50/mo.  Add that up and we’re looking at at least $1020. So it’s not like there’s a ton of arbitrage here.  There’s a reason they are offering the deal.

But even so, if I find enough value in the points and in having the TV service itself, this would be worth doing.  Essentially if I use the points right, they pay for the service by yielding me a free trip.

What else do I think about?

The fact is, there are better offers right now on credit cards.  In the past few weeks, we’ve written a few times about how you could get the Citi Platinum Select/AAdvantage World Mastercard, spend $3000 you were going to spend anyway over the course of three months, and harvest the 50k AA mile bonus, but maybe you already did that or maybe you’re just not willing.

But what is Brad going to decide to do?

I’m inclined to keep saving the money I’d have spent on TV and let these miles pass me by… but… because I’m a cheeky bugger and I just can’t wonder what would have happened “if…” I think I’ll make a phone call and see if they’d be willing to up the ante a bit.  I’ll ask if they could sweeten the pot to 40k AA miles and if they’ll do that, I’ll be watching Peyton shred another team’s defense next Sunday… with my laptop fixed on AA.com and searching for dates for a springtime trip to Ireland. I’ll let you know how it goes.

Thanks for looking into another way to wanderlust with us. Please share our site with your friends on social media.

2 Responses to Free Travel Without the Credit Cards