Right now the airline loyalty credit card reward programs have a bit of a price war going on. Both Delta and United are offering 50k points after meeting rather small minimum spending requirements of $1000(Delta) and $2000(United) in the first three months on their respective cards, waiving the annual fee for the first year, and providing a $50 statement credit. Yes, that’s right, they’re actually paying you to take enough points to do two roundtrip flights in the US, or any of a number of other amazing almost-free travel deals.

So I’m going to be bold.  Don’t choose just one of these cards, choose both.  I say get both of them now while the bonus is much bigger than it normally is (25-35k on Delta and 30k on United).

To give you an example… we invited an exchange student to stay with us for this school year.  She’s from Tromso Norway, which is damn near the North Pole. One look at some incredible pictures of the Northern Lights and the fjords of Norway, and I was totally convinced I wanted to go. 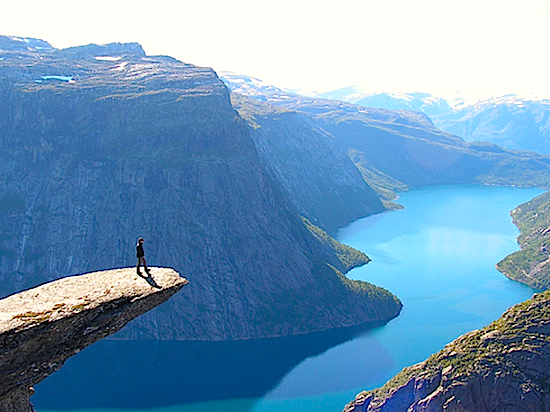 I imagined the tickets would be preposterously expensive, so I took a look… at least $2000.  Ouch.  So I tried out the idea of using Delta Skymiles to get there.  The best deal I could find was 125k and that was only to Oslo – we’d need to pay another $400-500 to get from there to Tromso.

Then I checked United. United has availabilty at the saver level – 60k points all the way to Tromso! Incredible value! That ticket would otherwise cost $3,281. That means my United miles would be valued at more than .05 each! Tack on another $50 and a single card application would net me more than $3300 in free travel. Talk about putting a perma-smirk on my face.

Obviously, in this case, I’d be best off to have an awardwallet socked full of United miles.  But before you run off and sign up for the United card alone, let me tell you about flights to Tel Aviv.

I also looked at availabilty to fly from SLC to TLV in February of 2015.  I was able to find it on both United and Delta loyalty programs, but on Delta I could do it for 85,000 while it was going to take 127,500 on United.

You may not be interested in visiting the icy slopes of Norway or the violence-plagued Holy Land, but these efficiencies play out in hundreds of other departure and destination itineraries.  As I said in a post not too long ago, when it comes to airline loyalty programs, it pays to be polygamist.

If you were to apply for both of these cards, you’d need to spend $1000 on the Delta card and $2000 on the United card before 90 days go by in order to meet your minimum requirement and recieve the bonus. Assuming you’re not much different from me, I’d imagine that you could put all of your expenses on one card one month, and all of your expenses on the other the second and third months

The idea, as readers of our blog are well-aware, is that you never use the card to make purchases you wouldn’t otherwise make. You’re not using the credit card as credit, but rather as a purchasing instrument – one that will enable you to take all kinds of almost-free trips to incredibly cool places like Norway and Israel.

If you wanted to get really aggressive, you’d apply for both of these cards individually for your spouse as well.  That way you don’t just have 100k points to work with, but 200k – to say nothing of the $200 ($50×4) in statement credits  you’ll have.  We’re talking all kinds of free money here.

Remember that your spouse has totally different credit from you, so don’t get drawn into the idea of just adding him or her as a second user – even if there’s a promise for another bonus on your account. For their credit to get checked and only receive 5k points is hardly what we’re after… we want the big numbers. We want an awardwallet with two commas.

But it bears saying that if you’re just getting started in this world and the idea of applying for four credit cards totally creeps you out, you’re probably better off to pick up the United Mileage Plus Explorer card. Those miles do tend to stretch a little further than the Delta Skymiles points in most instances.

Whenever you’re planning your trips, a great “home base” to get you started and from which you can find links to all the places you’ll need as you’re researching your options is our Using Airline Miles page.

There’s nothing we’d like more than to be the place from which you launch your journeys and the place you first come back to tell your stories. Thanks for Wanderlusting with us.