3 Reasons You MUST Visit the Kennedy Space Center 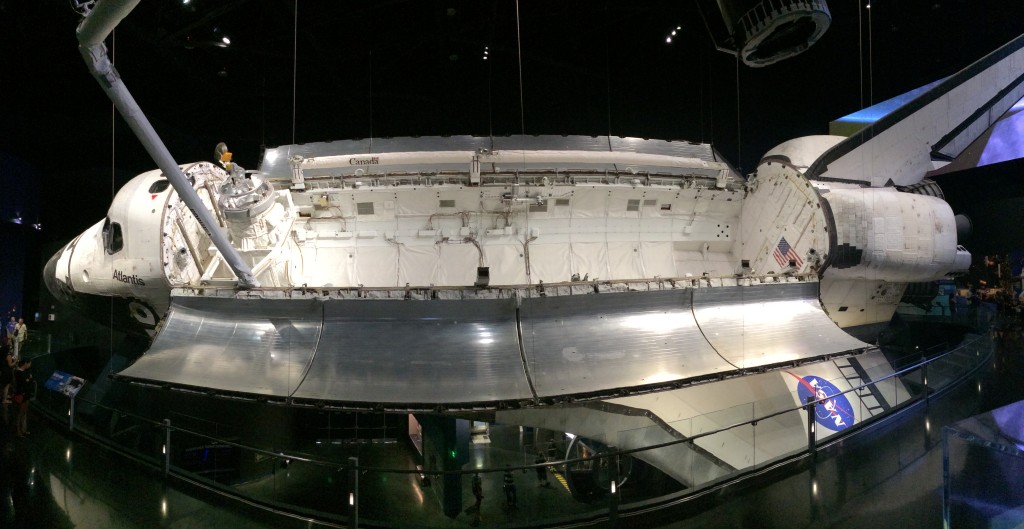 The ORIGINAL Atlantis Space Shuttle. This thing has been to Space 33 times!!!

It melted my heart tonight.  My (almost) three year old son tonight told me something as we loaded up in the car to run a few errands.  His focus normally lasts about 4 seconds, and he is on to the next thing.  He seems to forget things like his old man, but this memory must have stuck.  He said, “I want to be astronaut daddy.  I want to fly in a rocket.”  I knew that I  had made the right choice in taking him to the Kennedy Space Center in Cape Canaveral, Florida. 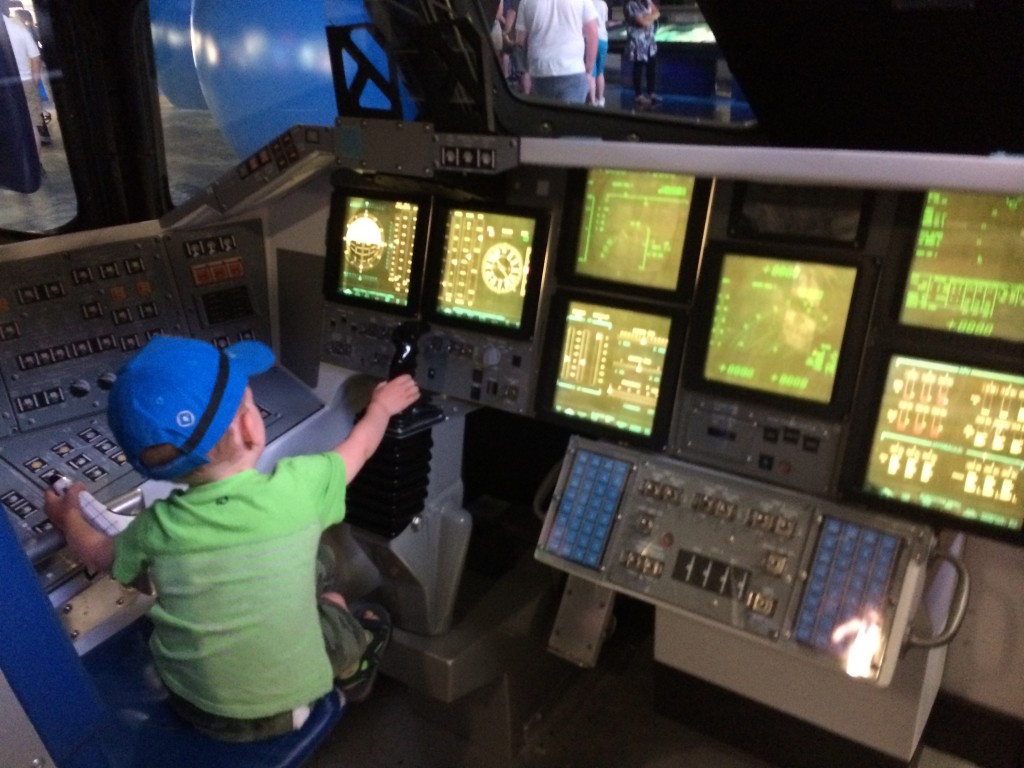 Max is flying the Atlantis

Of all the things that we did on our recent vacation to Florida, the one that stuck the strongest was the Kennedy Space Center.  It wasn’t DisneyWorld, nor was it SeaWorld.  The beach didn’t score as high, nor did the swimming pool.  His souvenir Atlantis space shuttle has been to the moon and back with all of the mileage that he has put on the shuttle since the Eagle landed at home again.

Not only was the Kennedy Space Center memorable for my son, but it was for me too.  It was probably the best thing that we did on the trip.  The history, patriotism, and sheer determination that the whole department is out of this world (knee slap).  Here are three BIG reasons you need to visit this important location:

Look.  I was born in the 80’s.  I wasn’t around when Buzz Aldrin and Neil Armstrong made the maiden voyage to the Moon.  Many of you weren’t either.  Neither did I participate in the feelings of competing agains the Soviets in the race to the moon.     The history has become part of our nation.  If you’re like me, and you didn’t enjoy those early space moments, you probably don’t know much about them.  It is worth researching and learning about the history behind our space exploration. 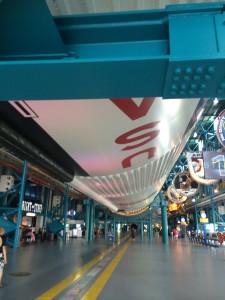 This is the Saturn V. You can’t really realize this size of this thing until you see it.

They’ve done an excellent job at adding a patriotic feel to the presentations.  Some of JFK’s quotes are cited in a few of the video clips and by the end of the presentation you’re about to bust out your best version of “God Bless America.”  (Everyone around me better be glad that I refrained.)  Visiting the Center will deepen your appreciation for your country and give you a better appreciation for those who gave their lives in pursuit of space travel.

Being from Idaho, it’s not like too many kids in my first grade class worked at NASA. I remember some kids in elementary school who wore NASA shirts and always talked about math problems that I still couldn’t solve.  I felt like they were dorks, but really they were smart.  It’s cool stuff to learn about the physics, science, and marvel that goes into space travel.

Obviously you’re not going to spend a day there and receive your Masters Degree in Astrophysics, but you will learn a lot about tons of cool stuff.  That is one of the big reasons that I enjoy traveling.  Here’s one to try on for size.  They build the rockets and shuttles in one building, not on the launch pad.  Do you know how they move the precious cargo from the assembly to the launch pad?   Here’s a hint:  They don’t throw it in the back of a Ford F-150.  They have a couple of crawlers that span the distance of a major interstate highway and take up both sides.  See the picture below: 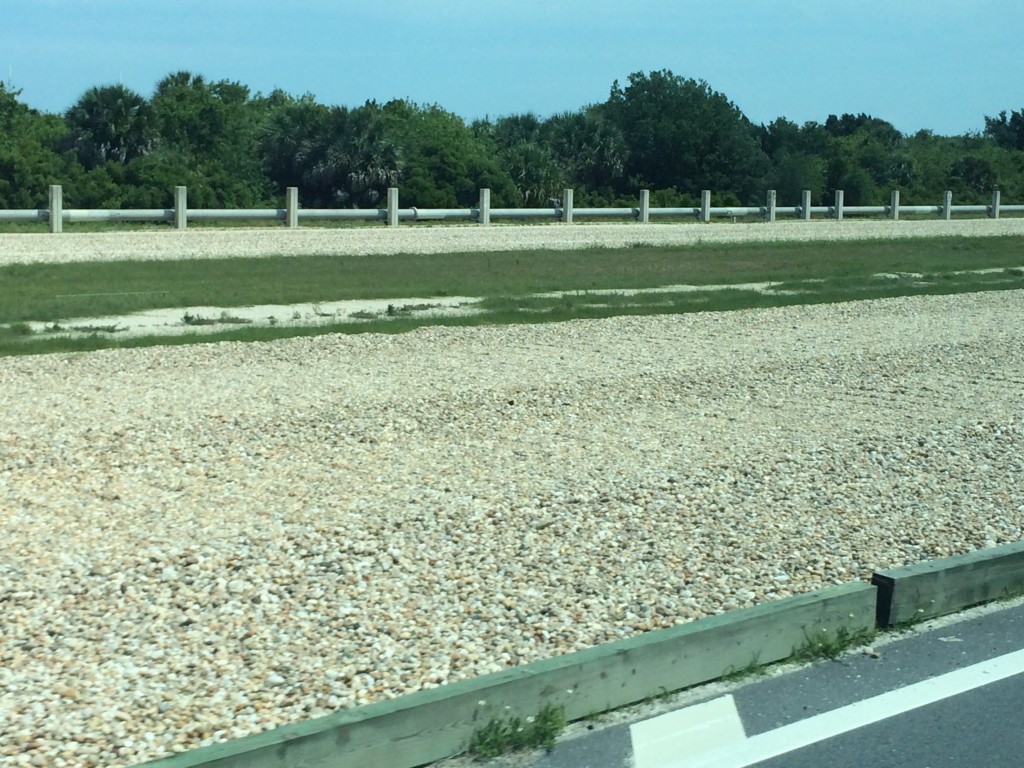 This is the road that the crawler takes (both sides).

Yeah, so they have to have two of these things that travel at the same snail speed taking the loaded rocket to the launch pad 39.  Did you notice that the “Slowway” wasn’t paved with asphalt, but it was made of rocks?  Didn’t you throw rocks as a kid and they’d spark when they hit the ground?  Can you imagine tons of sparks with a rocket loaded with fuel?  Probably would last as long as a Britney Spears marriage.  Those rocks are special rocks that won’t ever spark regardless of the pressure put on them.  Cool, right? 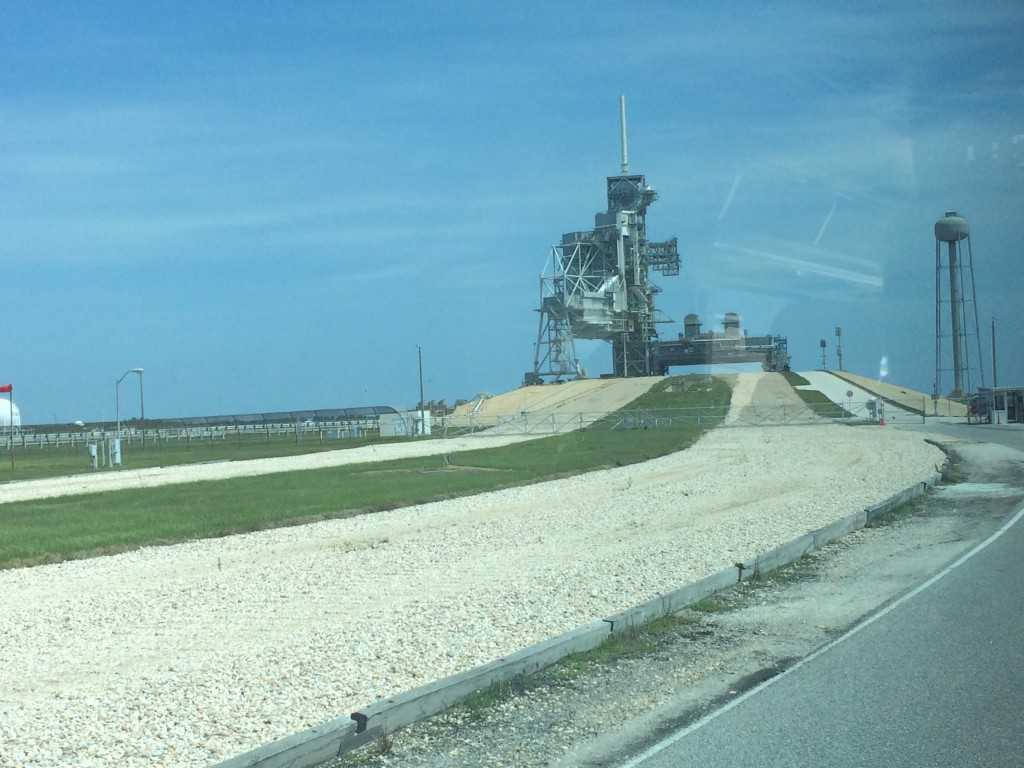 3.  The Kennedy Space Center is half the price as DisneyWorld- 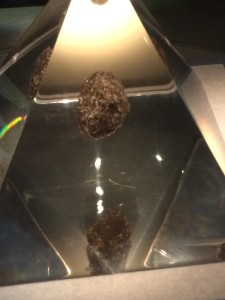 You won’t be surprised to learn that I trembled when someone told me the entrance was $50 per person.  I shutter at the cost of everything, so this was no exception.  That’s why we have this blog.  I was bummed at the entrance fee, but a few of the family members who went with us shamed me for feeling that way.  They explained that I had been willing to pay $100 to DisneyWorld, but wouldn’t shell out $50 for this?

In the end, they were right, and I was glad that they encouraged me to go.  Plus it was awesome when I came back from the trip and actually used my Barclaycard Arrival Points to offset the cost of the entrance fee, so it was really just parking that we had to pay for a day of excitement.

We spent almost as much time at the Kennedy Space Center as we did at DisneyWorld.  There is a ton to see, and I could have really spent another day at the KSC.  They’ve got a lot of history there and tons of information if you’ve got the time to read each of the displays. Toting around two children under 3 usually results in stopping them from setting off another rocket.

Basically this place is a MUST see.  If this doesn’t start pumping 4th of July feelings into your bloodstream, then maybe you should renounce your citizenship.  This place is definitely worth the drive, and easily worth the entrance fee.  Have you been to the Kennedy Space Center?  Did you enjoy your visit?