Why I love Polygamy (When it Comes To Travel Loyalty Programs)

When it comes to spouses, by all means, be monogamous. There’s so much more to gain from a lifetime of dedication to a single partner, but when it comes to earning loyalty points to unlock a world of almost-free travel, let polygamy be your game. I swear allegiance to no single travel loyalty program. Having multiple partners means more travel to more places more often, and that’s precisely what we’re after.

When I booked my trip to Hawaii, I had enough miles with various programs that I could have chosen from any of several carriers – US Airways, Delta, United, Alaska, American and more.  So my decision became about which of those would be the wisest use. US Airways wants 40k at the lowest level to get to Hawaii, and those points will eventually become AA miles (through the merger) anyway. Delta and United wants 45k. There wasn’t availability on Alaska Air for my dates, but with American Airlines, I hit the jackpot! I ended up booking a perfect itinerary for 35k AAdvantage miles.

But to contrast that, when I was searching out flights to LA so I could go to the BCS National Championship game for free, I would have to have paid 25k AAdvantage miles for a flight I wound up booking for 18k SW Rapid Rewards. The best option will depend on the situation at hand, and you’re best off to be armed with many different weapons.

For two years now, we’ve taken advantage of a great Country Inn & Suites Hotel in Boise that we could book for 2 nights for 15k Club Carlson Gold Points, but when I looked to do the same thing the other night, I saw that they’ve increased it to a Category 3 hotel which requires 28k for 2 nights. I would have cried myself to sleep that night, but for the IHG program which offers a great Candlewood Suites hotel in Boise that we can book for only 10k/night.

I’m helping a friend book a trip to an off-the-beaten-path airport in Alaska – (Yakutat) YAK. Only Alaska Airlines flies into that airport but he doesn’t have any Alaskan Air Miles.  They’re a partner with Delta, so I thought he could use Skymiles, but they won’t work for the last leg of the flight.  Luckily, he’s followed our advice to be like the chubby kid under the pinata when it comes to gathering up points, so he had a stash of Starwood Preferred Guest Points – he could transfer them to Alaska Air at a rate of 20k:25k, so he ended up redeeming those 20k points for a flight that would have otherwise cost him $1300.

How Being Polygamous is Helping Us Go on an Alaskan Cruise

If all goes well, I’m going to book an Alaskan Cruise for our family as soon as school gets out. I had hoped to drive to Seattle and score one going in and out of Seattle for under $500/person, but they haven’t gotten that cheap.  The one that’s a bargain right now is a one-way cruise from Anchorage to Vancouver on Vacationstogo.com for $399/person but that leaves me with the dilemma of getting my family of 6 to Anchorage.  With pretty much every airline program I’d be looking at 25k/person for a total of 150k for six one-way flights… not exactly the WorldWanderlusting way of optimizing usage. 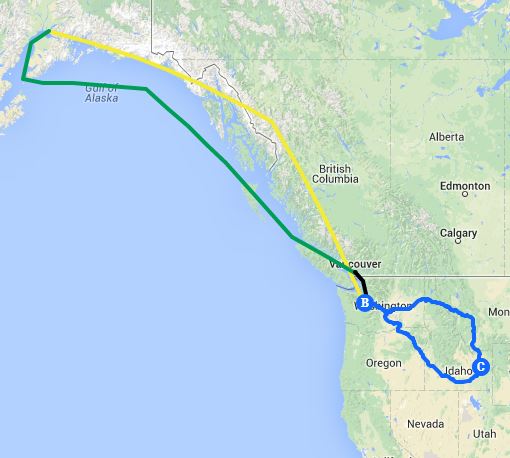 But never content to blow my entire wad of points at once, I kept seeking a solution. I know that short one-ways are the kind of thing British Airways can be really good for, so I tried to make it happen if we could drive to Vancouver and take a one way from Vancouver to Anchorage, but BA’s partners don’t fly that route. Seattle, though, was a different story.  For 10k/person (60k total) we could fly from Seattle to Anchorage and then take the cruise to Vancouver.

That of course leaves the dilemma of getting from Vancouver to Seattle to get our car.  My first thought was that we could rent a car one-way, but we’d need a minivan and it would cost me $260.  Then it occurred to me that those cities are along the Amtrak rail line.  I could transfer Ultimate Rewards points to Amtrak, but it’s such a short trip that we’re much better off to pay the $160 for all of us to take the train.  Of course, even that I’ll get reimbursed to my account, because I’ll put it on my Barclaycard Arrival World Mastercard.

In the end, I’ll have an awesome journey that consists of planes, trains, automobiles – and boats!  If I break it down, just by being creative with the way I structure our trip, we’ll wind up saving at a ton before we even start into using miles and points. I figure it will cost us $400 in fuel to drive to and from Seattle, $600/person including tax for the cruise, and the flights about $250 in value each.  Add in the $160 for the train and it works out to a total of $5,660. That sounds expensive until you consider some alternatives. 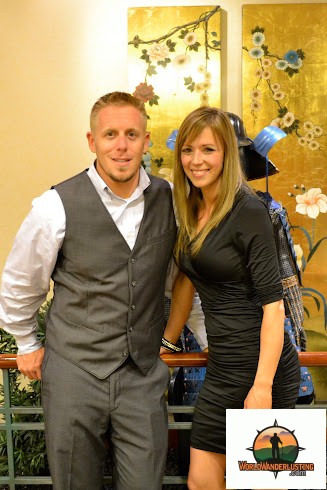 Being Monogamous on The Norwegian Spirit

Just for kicks, I checked some prices to see how much a family cruise vacation would cost for someone the way it’s traditionally done.  The cheapest flights I could find from Idaho Falls to Seattle were $586/person. The best price I could find on the RT cruise out of Seattle was $950/person after tax. The total cost on that for my family would be $9,216.  No wonder no one ever does stuff like that – who could justify it?

But put a little polygamous loyalty point magic on there and we can really get excited. Those flights will literally be free with my 60k BA points that I’ll actually get from moving points from Ultimate Rewards. I have 100k Barclaycard Arrival points that will shave $1000 off my cruise price.  Plus, the last time I took a cruise on Norwegian, I put $250 down for $500 off a future cruise. By the time it’s all added up, I’ll be saving roughly $3000 for a total cost of just over $2600 – not bad for a cruise vacation for six people.

I tell this story to illustrate how powerful it is to have an awardwallet with a variety of points from many different programs – that way I can always optimize my usage for minimal impact on my point balances and keep those stored for future adventures.

What about you?  Are you loyal to a single program?  Or do you like to spread it around too?