Posted on November 18, 2013 by Brad Christensen

I’ve told you, our army of WorldWanderlusters, about our incredible trip to Italy where we got tickets that should have cost us $2600 for $162 and 80k points.  I told you that we stayed 13 nights in hotels and didn’t pay a dollar (or a euro) for a single night. I told you it was epic and that every day was filled with incredible sights and adventures.

But what I didn’t tell you was that it got even better.  You know I am vigorous in my pursuit of free-travel, and you also know that I am shameless… shameless enough to try to make my already almost-free trip almost-freer.

We had a little wrinkle in our flight plans on our departure.  We were headed to the SLC airport when we got a call saying our flight would be delayed and that we’d miss our connecting flight.  I called AA customer service and begged them to find a routing that would still get us to Venice in time to keep our tightly-knit itinerary. 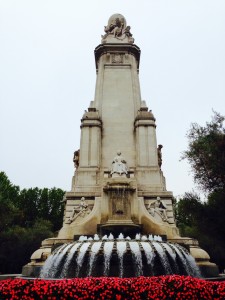 One of the many sites in Madrid

Luckily, they were cooperative and the new plan was to put us through Madrid and get us into Venice even earlier… but as these things usually go, our next flight was delayed as well and when we got into Madrid, we had already missed that connecting flight.  They put us on a flight 6 hours later and gave us a meal certificate.

We weren’t exactly thrilled because we were anxious to get to Venice, but we made the best of the situation and took the train into downtown Madrid and visited the sites.

By the time we arrived in Venice, it was much later than we had planned on and it didn’t spoil our trip, but it did have some consequences.  I didn’t harbor any anger over the deal, but I did see it as an opportunity for American Airlines to demonstrate some awesome customer service for me.

So after our trip, I logged into the AA Customer Service Portal, entered the information for our flights, and, following the same rules I laid out in “How to Write an Airline Complaint Letter,” penned this sub 1500 character letter:

The delays on this trip led to two missed flights, extensive layovers, and a day of cancelled activities for our vacation.

I understand that air travel arrangements won’t always go smoothly, but there’s always the hope that you’ll still be able to do the things you’ve planned on.

Because our flight out of SLC or ORD was delayed, we weren’t able to make the flight from ORD to DUS and were re-routed on an Iberia flight through MAD. Then that flight was late and we didn’t arrive at VCE until 7:30pm.

As a result, we were unable to do the cave tour we had booked and missed our dinner reservation. We were able to get our tour refunded, but were disappointed that we didn’t get to see the place where Gandalf said, “You shall not pass!”

The scenic drive we were so looking forward to became a nerve-wracking drive over mountain passes in the dark.

It’s not like this ruined our trip by any stretch of imagination.  We had a great time and all in all, American Airlines and its partners were accommodating and friendly.  Even so, when we spent two entire days in transit on both sides, every day in country is precious and hurt to miss out on some of those activities.

I know you can’t offer a refund, but even if you could offer 10k AAdvantage miles for each of us to make our next possible adventure that much closer, it would be much appreciated.

Thank you very much for your consideration and best wishes.

AA Customer Service was extraordinarily attentive and within 2 hours I had a response in my email box, apologizing for the delays and telling me that the 10k AAdvantage miles would be in each of our accounts in the next few days.

I was, of course, summarily pleased.  There was a temptation to wish I had asked for more, but honestly I felt like it was perfectly fair.  In the end, I had paid a total of 30,000 AAdvantage miles for a flight to Europe… that being only 5k more than a domestic flight, my ear-to-ear grin is probably justified.

Also, one of our free hotel nights was at the Holiday Inn in Ratingen, Germany, on a stopover in Dusseldorf. When I booked it initially, I booked it for 15k Priority Club points (I had 85k from the Chase Priority Club Select Visa).

Shortly after booking it, the most recent Priority Club PointBreaks list came out. (Priority Club offers special 5k/night deals on some specific hotels every quarter).  Sure enough, the hotel I had selected for its free airport shuttle was on the list.  I called to see if I could cancel and re-book and they told me there was not availability.  “Oh well,” I thought, yet I never quite resigned to paying full points-price. 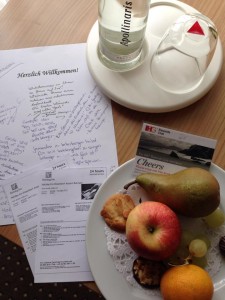 Thank you very much!

A couple of weeks later I went to try again and found that I could book it online for 5k points.  I simply booked the night at the PointBreak rate, then went back and cancelled my first night.  Cha-ching!  10k points right back into my account.

Now, if you like that action, check this out.  When we rolled into the hotel, they recognized us as gold-status (A nice perk that comes along with the card).  They gave us two free 24-hour internet passes (a $15 value) and two drink passes for the bar.  When we went to our upgraded room, there was a plate of fruit and chocolate along with a hand-written note from the staff.

I am here to tell you, fellow WorldWanderluster, this is the way to see the world. If you’ll dedicate a few minutes a day to learn How to Wanderlust, you’ll be telling these same kinds of incredible stories yourself.