Guest WorldWanderluster Judd: “You Can Travel and Afford It!”

Posted on October 7, 2013 by Brad Christensen

I have to say, this is one of the most rewarding parts of putting in all the effort to write and maintain this blog.  I can’t tell you how exciting it is to have people enthusiastic about the way a little effort can earn a phenomenal amount of free travel. Thanks to Judd for putting together a great story of how he’s wanderlusting his way to some fulfilled dreams.  Cheers!

I recently had some friends ask my wife Tami and I about our trip to Hawaii. This was something they wanted to do for their upcoming anniversary. Originally we had planned to do this together but Tami will be popping out child #2 around the time they want to go.  They have never been and we have only been there twice within the last few years. I explained we were not professionals, but that I had recently joined the world of “Wanderlust” and that we were traveling for free. Yeah, I said it and they looked confused as ever.

I told them I believed that I could not only help them get there for free or little costs, but to stay there for free as well.  I explained about the magic of using your good credit to reward yourself with frequent flyer bonuses.  Then I mentioned that evil word/phrase “credit card.” I immediately saw a change in their demeanor and lost their interest. Really?  The one reply I got, “Well it might be something we could do on a double income.” Having been a former pest-control salesman, I knew I had already lost them by their body language so I didn’t bother fighting them. What I wanted to say to that specific comment was, “that means this system is perfect for your needs. YOU CAN TRAVEL AND AFFORD IT!” 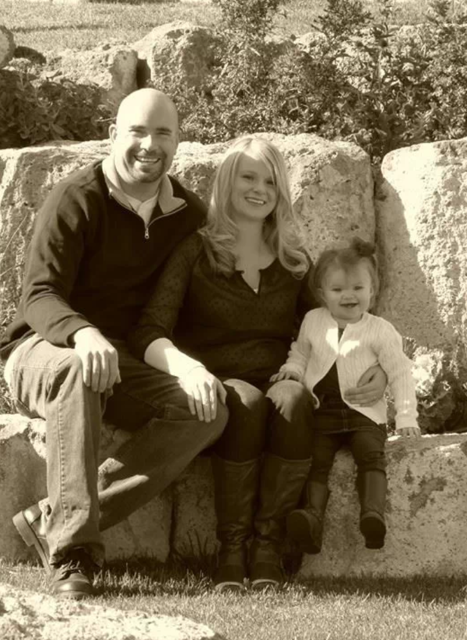 I became a hooked to Sheldon and Brad’s website almost 1 year ago. Since then we have traveled to Hawaii on credit card points, planned many future vacations with the hundreds of thousands of points I continue to accumulate, and recently lived-out a small but meaningful dream of mine; attending a Kansas City Chiefs NFL Game at Arrowhead Stadium.

I have been a huge fan of the Chiefs since I was little. I dreamed of being a part of the “sea of red” and chanting in the loudest stadium of the NFL (Google it, it’s true!) My Southwest Rapid Rewards from the Southwest Airlines Rapid Rewards® Plus Card finally gave me the courage to fly to Missouri to watch a game. Yeah, I paid $10 and used 14,000 rapid reward points to fly myself to fulfill a dream that I had stuffed away in my imagination for the longest time. Sure, I could have done it before. I always had excuses until I realized that traveling can be cheap, that it can be AFFORDABLE.  I also had 50k plus Starwood points to use for a hotel, but I scored a pointless bed at friend’s house near the stadium. 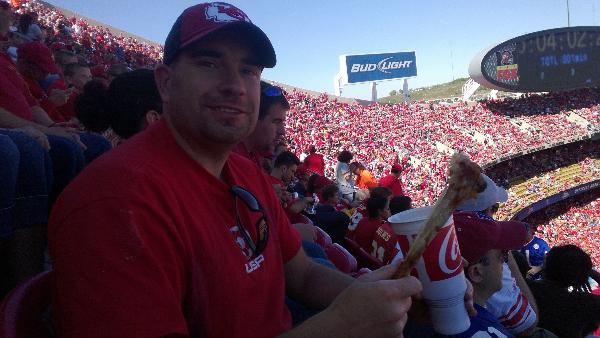 Judd – fulfilling a dream at a KC Chiefs game

What is even more intriguing is that this gets even better. We had to make some changes to the itinerary because of a family issue. The best part was that on Southwest I was able to cancel everything with no penalty on short notice.

Original itinerary (to be fulfilled soon): Fly to Kansas City, MO for the game 15,000 Rapid Rewards points. Catch a flight the next day to Boston, MA (history buff here). Courtesy of the Starwood Preferred Guest® Credit Card from  American Express, we stay 4 nights at a Starwood Four Points hotel with 28,000 Starwood points in the heart of Boston and free breakfast. We’ll drive a rental car paid by travel reimbursement (Barclaycard Arrival World MasterCard) to Newark, NJ (3 hour drive) and stay at the New York Sheraton Harbor Hotel for two nights 20,000 starwood points (splurging on the this hotel because it had a sick view of Manhattan). We just wanted to see the 9/11 memorial. Then we fly back to Salt Lake City, UT for a total of 19,000 Rapid Rewards. Total usage: Southwest RR-49k   Starwood-48k

I could never dream of taking such a vacation that would have cost me $5 per person per flight totaling $30 for two people.  Sure, I paid the annual fee so let’s say $100 total. Tami and I have worked so hard to have the credit that we have now and we believe we deserve some kind of reward for our hard work.

Sheldon and Brad have shown us how to be rewarded and that is to Wanderlust! Thank you for helping us make even our smallest dreams a reality. Keep traveling my friends!