I’m basically salivating right now as I plan out this trip.  Eastern Europe attracts me not only for their affordable prices, or good food, but for the sites.  Some sites are really overlooked in some of these countries like Hungary, Slovakia, Romania, and Bulgaria.  An Eastern Europe trip tour is in store for you!

In order to make this trip happen you’ll definitely need to get your hands on the Club Carlson Visa.  Don’t sweat the $75 annual fee on this puppy.  You’ll never regret what you get for that small annual fee.

Instant Gold Status is among my favorite benefits of the card, which is their second highest tier, so you’ll be getting upgraded often.  Last week when I checked in to a Radisson they also forked out free buffet style breakfast coupons, free drink coupons, a larger room, and a cheese and fruit tray in the room.  That is service!  These guys don’t mess around with their gold customers.

However, the hook that will reel you in is the “Last Night Free” feature.  When booking a room on points for two or more nights, you’ll get the last night without paying-points or $$$$.  Say What?!  Yeah, you heard me right.  Staying for two nights only uses one night’s worth of points.  To throw more ice cream, cherries, whipped cream, and fudge on top, this tour through parts of Eastern Europe combines the use of Low-Level-Redemptions(cheap point redemption), which is the basis for your testimony in WorldWanderlusting.

Tonight you’ll be staying at the lovely Park Inn Sofia by Radisson.  This place has all the normal amenities of your normal North American hotel, but also sports a steam room and sauna, which is really hard to find in most hotels in the US unless you’re staying at the Fairmont.  Although those things are nice, keep in mind that you’re there to see Bulgaria too.

Bulgaria still uses the Cyrillic alphabet (Russian), which is bizarre to me based on their location.  None of the bordering countries use that same alphabet, but oh well, soak it up.   They lay claim to the modern form of yogurt that you probably had for breakfast, so make sure you try some of the local fare that way.

They also have famous opera singers, so try to get a ticket to hear them sing in one of their famous opera houses.  It doesn’t matter if it’s in Bulgarian, you wouldn’t understand the words if they were in English, would you?

Best part?  This wonderful hotel will only cost you 9000 points for two nights with the Club Carlson Visa. 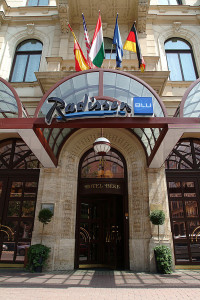 One of Club Carlson’s most luxurious lines in the Radisson Blu hotels.  The Radisson Blu Beke Hotel in Budapest will knock your socks off!  I’ve never been to Hungary, but I’ve heard all kinds of good things about it.

It’s always nice in Europe when your hotel comes with free Internet, because it definitely isn’t common.  This place gives you access to their free WiFi so you can work on the plans of your following days.  It also is located really close to the train station, which makes it super convenient for travel to downtown, or if you’re planning on seeing the countryside it is great as well.

This city would be a great place to rent a bicycle early in the morning and ride it around all day long.  There is a lot to see in Buda, as well as Pest. You heard me right.  The river divides the two parts of the city, one is called Buda, the other is Pest.

You guessed it.  9000 points for two nights at this humble abode as well. 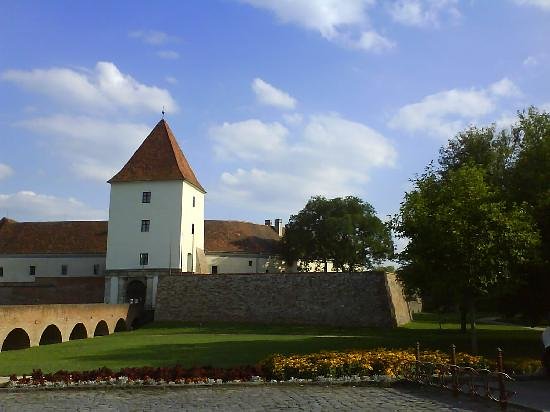 This photo of Sarvar Nadasdy Castle is courtesy of TripAdvisor

If you thirst for an opportunity to visit a castle where you can eat medieval foods, see people dressed up in costumes, and watch some horse races, then plan on coming in the July and visiting the Sarvar Nadasdy Castle.  It could really give your children a feel for living in those times, (minus the unsanitary conditions and the black plague, but who wants to relive those experiences?) then this is a place to visit.  They haven’t opened the entire castle to everyone, but it would be great to play King or Queen for a day, right?

Western Hungary is known for its wonderful spas.  The Park Inn by Radisson Sarvar Hotel & Spa is where you’ll call home. Plan on taking this time to enjoy the beautiful countryside of Western Hungary.  This hotel will take 15,000 points for two nights of enjoyment in the spa. 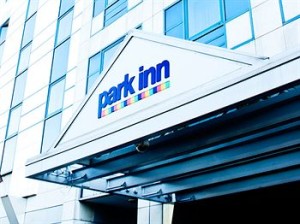 This hotel is right on the river and boasts some amazing views of the city.  Get out of the hotel room to see the rest of the city including another famous castle, the Bratislava castle that is less than half a mile from the hotel. Unfortunately it is only a replica, because the original burned to the ground in the early 1800’s.  It sits on an acropolis that overlooks the city.  The city is characterized by medieval towers, right next to modern buildings.  You’ve gotta think that this has been some wanted land for hundreds of years.

Once again, this hotel will only cost you 9000 points for two nights.

For all your 8 nights (assuming you spend two nights at each hotel) you should plan on paying:

Who doesn’t want to explore eastern Europe on a tour of these beautiful countries, all the while only paying $75 for eight nights in wonderful hotels.

Why aren’t you worldwanderlusting with us yet? Pick up the Barclaycard Arrival to help subsidize your train fares by $400 to even further affordabilize[sic] your trip.