Disclosure: Brad and I do earn a commission when you use our links to sign up for the Starwood Preferred Guest American Express and the Barclaycard Arrival World Mastercard.

There is something about the Gulf Coast that intrigues me.  It is probably having read all of the John Grisham books that have made me come to love Biloxi, Hattiesburg, and so many other cities in southern Mississippi.  Although many areas of the world are still yet to visit for me, this is one that is toward the top of my list.

As the Gulf Coast is somewhere that I’d really like to visit, I wanted to see if I could simply WorldWanderlust my way across the area, which would lower the overall cost of my vacation.  If you’ve been following us for long, you already know that our objective is to take you and your family more places for less money.  Here is an easy and very affordable way for you to Explore the Gulf Coast courtesy of the Starwood Preferred Guest program.

How to Get to the Gulf Coast

I would recommend for this itinerary that you fly into MSY, or the New Orleans airport.  The reason for this is because it is a large airport, and there is a hotel right by the airport at which you can stay if you arrive late in the day.

You’ll need 12,500 miles to fly into New Orleans, and you can book that on either United, or American Airlines.  You should also consider using some Southwest Rapid Rewards to book this ticket as they fly into this airport and they can be cheaper than 12,500 one way in many instances.

Rent a car using with your Barclaycard Arrival World MasterCard – $89 Annual Fee Card, that we talked about the other day.  They’ll reimburse $400 in travel expenses after you meet the $1000 spending requirement, which will make your car rental “free99.”  A quick search on CarRentalSavers.com showed that you could get an intermediate car rental for a week in December of 2013 for roughly $250.  It would be cheaper if you chose to drive back across the entire Gulf, but you would end up paying for it with a broken back and a ridiculous fuel cost.

Depending on how much you like driving or not, you might want to fly out of Tallahassee, Florida, which would save you from having to do the return trip back to New Orleans.  The airport in Tallahassee is much smaller as you’d expect, so your choices there are United and American, and should cost you 12,500 miles per person.  If you love Southwest, you can fly out of either Pensacola or Panama City Beach, Florida, both of which aren’t very far from Tallahassee.

Where to Stay on the Gulf Coast

Our suggestions rarely change.  We don’t want you to pay for your hotels, just like we already explained how to get your car rental and your airfare for free on this vacation.  In order to do this you’ll need to accrue some Starwood Points.

The quickest way to do this is to get the Starwood Preferred Guest® Credit Card from American Express. They will give you 10,000 Starpoints for the first purchase, then tack on another 15,000 once you’ve spent $5000 within the first six months of having the card.  This will give you more than enough points for this vacation, even if you’d like to stay eight nights at a combination of these hotels.

We found a a number of Starwood Preferred Guest hotels that sit in their Category 2 along the Gulf Coast that we will show you.  We pick these hotels because they make your 25,000 bonus points last longer. The category 2 hotels only require 3000 points for a weekend night and 4000 on a weeknight.

You’ve got two to pick from that are both very close to the airport.  The Sheraton Metairie, and the Four Points by Sheraton New Orleans Airport. It’s a bit of a bummer that they aren’t in downtown “Nawlins,” but the points will last you much longer using these hotels because a category 2 hotel, and since you have a car, there’s no where you can’t go. 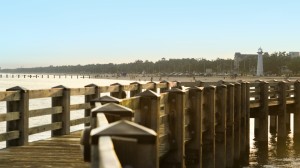 This place looks legit!  If the Four Points by Sheraton Biloxi were a woman, it would be Jessica Alba (or, right behind my wife on the sexiness scale).  It is right on the Gulf Coast and boasts some incredible views of the ocean, and nearby are some white sandy beaches that you and your spouse or your family will love.

The hotel is located on Beach Boulevard, and is right in the middle of the action.  This would be a place where I would plan on spending quite a few days, and making day trips out to other fun locations.  Doing this will keep the cost of your vacation really low, which is our number one objective.  That keeps you traveling for longer and more often than you could otherwise do.

Sporting a 4.4 out of 5 stars approval on their website is always a good sign.  The Four Points by Sheraton Downtown Tallahassee has free parking and is also a great location.  You could also plan on staying a few nights here, and going out to explore the outlying areas.

We’ve Taken you to the Gulf Coast for Virtually Free

Let’s recap everything that we’ve discussed today and show you how this is possible:

Let’s see.  So the total sum of this would run you about $20 on the high end for a vacation that would otherwise cost you over $2000.  Now that is a huge savings, so what are you waiting for? Worldwanderlust with us.

5 Responses to Explore the Gulf Coast with Starwood Preferred Guest