“I have done for my country, and for all mankind, all that I could do, and now I resign my soul, without fear, to my God, my daughter, to my country.”

These, the penultimate words of Thomas Jefferson, followed only by an inquiry as to whether he had survived to see the 50th anniversary of his signing of the Declaration of Independence, are among many from his lips which pierce my friend and fellow WorldWanderluster deep to his core. He requested this post, a journey to Thomas Jefferson sites in Virginia. 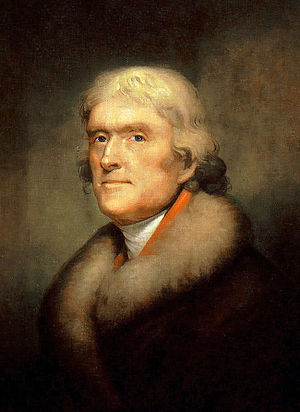 Sigh.  My friend will never know Thomas Jefferson the way he’d like to. He could read biographies to the end of his life and never know more than he’ll learn in minutes of retracing his steps, contemplating the Monticello countryside Jefferson loved more dearly than anywhere else. And so that’s precisely what I’ll help him do.

You know that we at WorldWanderlusting are passionate about many things – travel, history, adventure, culture, food, and relaxation – yet, what we’re truly passionate about… is passion. Our mission and our purpose in enlisting you in our army, is to , , provoke you to pursue your passion.  If for you that means spending all day in the sun on a beach in Cabo… so be it.  If it means traipsing through graveyards to find an epitaph that emboldens you… we’ll help you do it.  If it means carting your children to a remote village where they more fully understand their own blessings… let’s go.  We want you to discover your passions and arm you with the means to see them through.

Now, join me as I chart a path, a free way, to give one of our attentive followers a tour of Jefferson’s Virginia. If you’re hungry for more Jefferson details, you need to check out this very well-written biographical summary by Dennis Montgomery.

Earning the points to make this trip insanely cheap

My friend says his credit score is roughly 780, and his wife’s is 760 – both excellent scores.  They have no debt and stable employment.  His wife is a stay-at-home mother, who earns some income as a photographer on the side. Together their income is about 50k/year. They spend about $1200/month in creditcardable expenses – fuel, groceries, entertainment, medical, etc.  They have a mortgage that they won’t refinance and no plans to make debt applications for at least 2 years.

In order to take this trip, they need to save up $2900 or come up with enough points for 2 RT flights in the US and 8 nights in hotels, plus about $800 in food, transportation, and entertainment. They’re going to opt for the second option.

This month, he will apply for The Lufthansa Premier Miles & More World MasterCard® from Barclaycard.  He’ll have to pay the $79 up front annual fee, then he’ll need to spend $5000 within the first 3 months of having the card.  Even if he spends all of his $1200/mo on this card, he won’t get it done in time. Luckily (or unluckily) though, he still owes the hospital $2800 from the birth of their last child.  Once he gets the card, he’ll call the hospital and tell them he’d like to pay the bill in full if they can offer him a discount. Hopefully they’ll say they’ll discount it 20% and he’ll pay them $2240 on the card.  He’ll then pay off the $2240 immediately with money they have in savings to pay for the baby.  For the next three months, they’ll put all their normal, everyday charges on this card. When the statement gets emailed to him on the 15th of each month, he logs in to Barclaycard.com and pays it off in its entirety. After 2.5 months, he’s met the $5k spending requirement and his online login reports that he has more than 50k points.

He’s excited, but he’s not finished. He whistles his way home from work and pulls up WorldWanderlusting.com and promptly applies for the US Bank Club Carlson Premier Visa.  His Transunion credit score, which he tracks with CreditKarma.com, had dropped 5 points after he applied for the last card, but  even if it dropped 50 points, he’d still have excellent credit. But US Bank checks his score with Experian, so this credit inquiry will have a similarly small and short effect. When he gets his instant approval notice, he instantly gets 50k Club Carlson Gold points and goes to Amazon.com to order “American Sphinx,” a Jefferson biography, because he wants to start reading it before they go.

By now it’s August and just as he did with the Barclaycard card, he uses this Visa card for everyday expenses. He sets a reminder on his Google Calendar to cancel his card in April of 2014, and the Club Carlson card in July of 2014. He pays the card off immediately upon receiving notice of the statement, and monitors all his accounts on mint.com. After three more months, in November, he’s more than met the $2500 spending requirement to get the other 35k Club Carlson points, so he puts the card in his drawer and starts looking for the next offer to plan for a future vacation, but in the meantime, let’s do do some flight and hotel booking.

How to book the flights

As I mentioned, having met the spending requirements for The Lufthansa Premier Miles & More World MasterCard®, my friend will have 50k points with Lufthansa’s loyalty program.  I know the name “Lufthansa” may sound scary… yes, it does sound mighty German, but the interaction with the German airline is very limited.

My friend plans on going in March of next year, so he’ll need to search for availability of the flights on the respective websites for both US Airways and United Airlines (partners in the Star Alliance).   Once he the lowest tiers of points available for his dates and departure city into Richmond, then he’ll just call Lufthansa 1-800-645-3880 to book the flights.

He will have to pay a $2.50 fee for each segment of the flight, plus, as we mentioned the $79 annual fee on the card for the first year.  The net cost then, for two round-trip tickets that would otherwise cost about $500 each is under $100.

Where to Stay (for free)

They’ll be taking advantage of the amazing “last night free” Club Carlson benefit.  In addition to free upgrades thanks to his Gold Status, my friend and his wife will likely be upgraded every night.  Since these are Country Inn & Suites hotels, they’ll also enjoy a delicious breakfast spread, warm cookies and a welcome bag with some snacks.  Club Carlson knows how to create some fierce-ass loyalty.

As you know, we like to economize our points usage by staying in Category 2 hotels – which only run 15k points.  We couldn’t get all category 2 hotels, but we got enough stay eight nights and do it all using 83k of the total 85k bonus points they have.

Here are the places to stay: 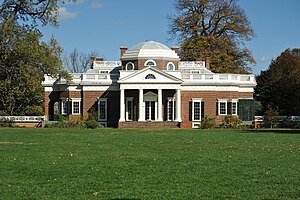 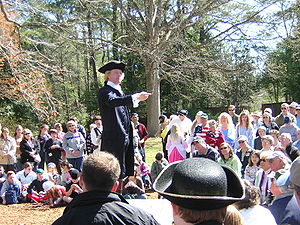 An actor portrays Thomas Jefferson giving a speech in the garden of the  Governor’s Palace at Colonial Williamsburg. (Photo credit: Wikipedia)

Other non-Jefferson sites to check out:

No doubt this will be an incredible trip – an epic tour of Thomas Jefferson’s Virginia. If you’d like to do this same trip, there’s not much stopping you from doing the exact same thing.

Thanks so much for wanderlusting with us.  We appreciate and love our loyal fans.  If you haven’t already, please subscribe to our blog.  Please don’t hesitate to share and spread the word far and wide.

{Disclosure: As you know, Sheldon and I may receive a commission if you use our links to apply for some of the cards we’ve mentioned in this post.}

2 Responses to Travel to Thomas Jefferson Sites in Virginia