I’m no Anthony Bordain, but I do love trying new foods. You probably won’t see me eating fermented duck fetuses, that I wouldn’t do even on Fear Factor. I have, however, found a few exotic fruits in my travels that have tickled my fancy. They’re hard to find, and usually not easily located in the US. I would love to share them with you so you can watch for them in your travels.

Although it may look like garlic, don’t fret for a moment about popping this bad boy in your mouth. This fruit is simply amazing. They aren’t very big, but the taste is exquisite. Don’t you dare try eating the purple shell, though. The skin is bitter like Mike Tyson when he starts losing a boxing match.

There is a legend that Queen Victoria would offer enormous amounts of money to anyone who would bring her this fruit. Right now I’d offer big money to anyone who could bring me a fresh one, too. These beauties are RARE to find in the states, so when you’re out of the country and you see some of these, please buy a couple and eat one for me. 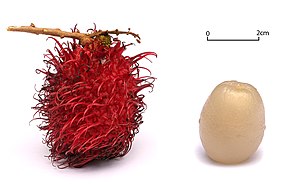 These are quite possibly the coolest looking fruit around – something like as if a hedgehog were to mate with a walnut. Opening them is a blast because you can do it by simply squeezing the fuzzball until the shell cracks. They easily peel away from their shell and there’s a sweet seed in the middle.

You won’t find a huge blast of flavor with this one, but they’re still really good. They’re found almost everywhere in Southeast Asia and a friend of mine from Costa Rica ate lots of these growing up. Shrug off the scary outward appearance and give Rambutans a try the next time you get a chance. 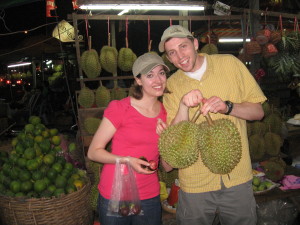 This fruit is legendary, but not in the great way. You’ve NEVER smelled anything this strong. Not even the gym socks you left in your locker for a few weeks could compete with the stench. This fruit easily takes the award for the stinkiest fruit around.

The smell is so overpowering that in a huge hotel you could crack one of these things and everyone in the entire hotel would smell it for days.

There are signs in hotels and malls that say “NO DURIAN” in English and Thai all over Thailand. They’re serious because you just can’t get rid of the smell of this exotic fruit.

We tried to avoid it on our trip, but we found someone samples of chocolate we couldn’t resist. After a split second of chewing, our mouths were telling us exactly what it was. Shae turned to me with a disgusting look on her face and said “Durian.” Then she turned and spit it out in a garbage. Chalk it up to experience. Pass on this one unless you’re really feeling adventuresome. 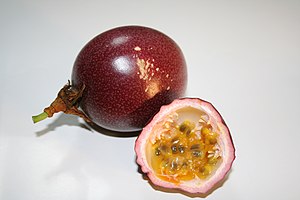 I didn’t even think this was a real fruit until I spent some time in Paraguay. They grow very well in South America, and also are known as Mburukuya in Paraguay. This is one you’ve got to try.

The smell of this one doesn’t smell super strongly like the durian, but the flavor packs a punch. You might feel repulsed by the look of the inside of this fruit, but don’t let that scare you. It may look disgusting mucous, but surely doesn’t taste like the same.

The best way to have this try fruit is to cut it in half, scoop out the middle and put it into a blender. Blend it up and add some water and a little bit of sugar. This is going to create a delicious drink that needs to be strained. Throw out the black seeds and enjoy! Also keep in mind that it might have a tendency to make you burp, so don’t have a drink if you’re trying to impress your girlfriend who’s anything but Samoan. 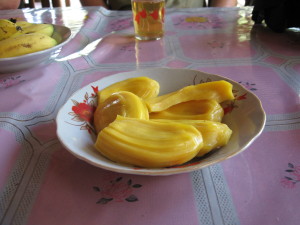 Notice the common thread that most of these come from the Southeast Asia area? God definitely gave them some delicious fruits, and unless you have the wanderlust you might never find them. Having drank from the fountain of deliciousness, I will always thirst until I can drink again.

The Jack Fruit isn’t going to knock your socks off like the Mangosteen, nor does it reek like a durian, but it’s still an exotic fruit because you can’t find it just anywhere. 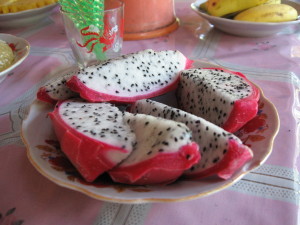 Ok. The rest of these fruits kinda got screwed on their names. This one has the coolest name of any of the above. It probably looks the coolest as well. The skin is purple, and the inside is white with small black specks.

The taste also mimics the appearance. The fact that it looks so unique probably makes this thing even better. It actually has another name, but the translation into English from Cambodian is “Dragon Scale,” which would mean that the outside looks like a dragon, and for that reason they call it a Dragon Fruit.

These are relatively easy to cut and great to eat. They’re pretty easy to find and rather affordable if you’re shopping in their native environment.

Go out on a limb and try some of these exotic fruits when you see them around. Don’t worry, the durian will find you.

The BarclayCard Arrival World Mastercard will get you at least $400 off your next trip.