Disclosure: This post was written by one of our best friends, Trevor.  He loves travel more than anyone we know and has been an inspiration to us.  He’s visited 50 countries before his 29th birthday.

In the movie “It’s a Wonderful Life”, George asks Uncle Billy what the three most exciting sounds in the world are, and after a sarcastic remark, George exclaims, “Anchor chains, plane motors and train whistles!”

My Love for Travel

When I was 15 and living in Barcelona I got a 3 week Eurail pass. What’s more exciting than a Eurail pass? When you travel like every day is Christmas morning. I recall one conversation with my travel buddies, where we literally asked each other this question in all seriousness, “So do you guys wanna wake up in Rome or Paris tomorrow?” 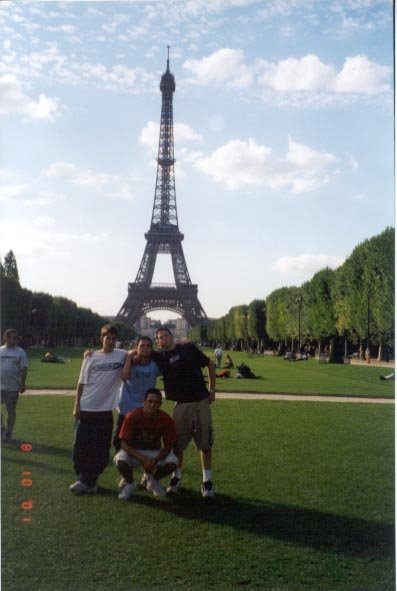 Trevor and Sheldon with two other friends in Paris in 2001

We opted for Paris, and then we opted for Rome, and the better part of Europe – and all of it became a part of me.

Now, later in life, I’m no longer living in Europe and don’t have the freedom a Eurail pass.  But I do have the same zeal for travel.  And luckily, I have a resource to help me see it out. I’ve been following WorldWanderlusting from day one, and almost immediately my wife and I were able to accumulate 240,000 frequent flyer miles with American Airlines.

We’ve done a lot of things the “free-way,” and recently we chose a time of year when cruises were cheap and a destination we both had wanted to visit for some time. We boarded a ‘free’ flight to Paris, where we would spend a day and then fly a no-frills puddle jumper, notorious to any seasoned European adventurer, to Milan. From Milan we caught a train to Genoa through the beautiful countryside of northwestern Italy.

The cruise left from Genoa, Italy and headed down the Italian coast into the eastern Mediterranean Sea, passing through the Aegean, the Bosporus Straight, and finally into the Black Sea. The idea alone of these places left us in a giddy, anxious reverie. There is nothing more exhilarating than the unknown, not the simple unknown, but the true, the real unknown. For me, the Black Sea was as foreign as a black hole – an exploratory adventure that evoked sentiments of extreme excitement. It’s something I’m not content to settle for on occasion, but more of an addiction I must cede to often.

Many people with whom I speak about my exploits assume I am either the lucky CEO of a crackpot start-up, or a trust fund baby. My conversations gravitate to the many hidden secrets dotting the globe, and people assume my having experienced them makes me an independently wealthy young jetsetter. This is not the case. Do I want to be rich? Sure of course, not for the traditional reasons, but because money purchases something priceless for me; travel, passage, freedom, flight, escape, wonder, adventure, gratification for my wanderlust. It fills a hole that is insatiable by any other medium. While I’m wasting away in the thirst of the desert of mundane monotony,  travel entreats me like a river of clear crystal water. 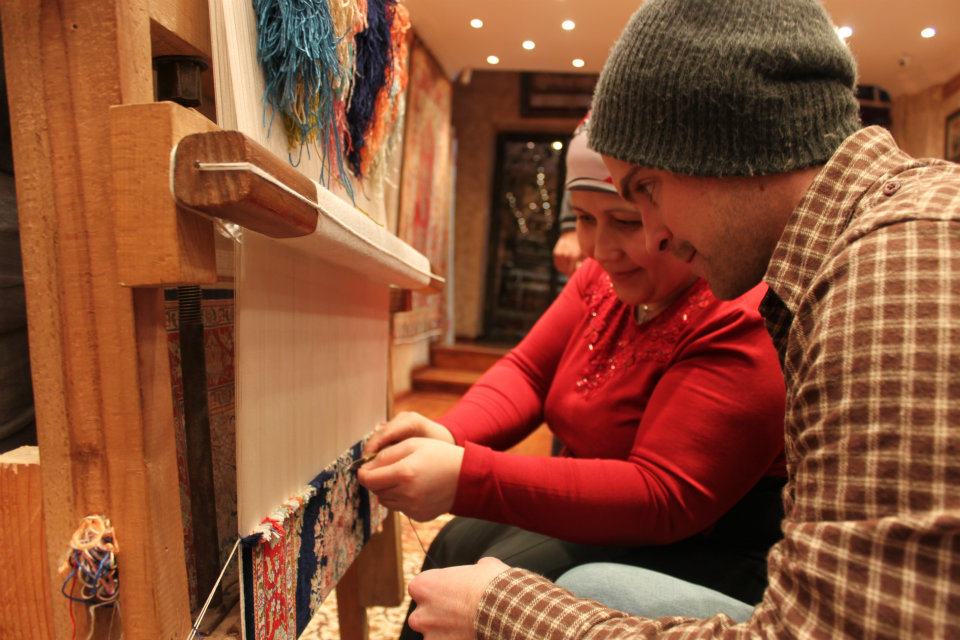 Trevor Learning How to Make a Turkish Rug

As is very common for me whenever I travel, passing through the Bosphorus Straight on our cruise, I envied the exotic residences. I longed to gaze out each morning and night at Istanbul’s peerless twilight. Water is everywhere in Istanbul – North, South, East, and West. This, along with her hills and ancient edifices, mean the sun’s rays have all the more to illuminate.

My tour guide, and now close friend, Gökhan, ([email protected]) in his very adequate English sprinkled with a delightful Turkish accent, countered my expressed desire to live where he lives, saying: “So what. I live along the Bosporus Straight. You live in the shadow of the Rocky Mountains. In my back yard there is Angora goat. In yours a cougar.” The Angora goat is a species endemic to the rocky landscape of Turkey. It produces a precious wool, known as Mohair. A basic scarf made of this only chin-grown wool, can go for up to $1500. The point Gökhan made was well taken, yet it did not appease my yearnings. 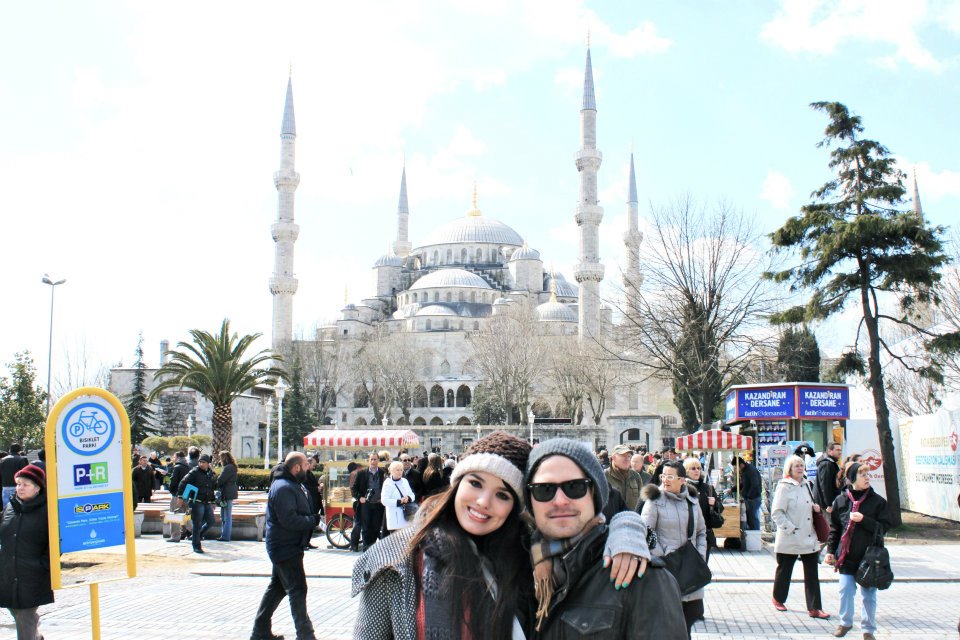 Trevor and his Wife in Istanbul

Istanbul is the gem of the empires. Turkey itself is a very special country. It is the only official Muslim country to implement secular law. Also they do not identify themselves as Arab, European, or Middle-Eastern. They are Turks. They are their own race and their own empire. This contrasts well with the more oppressive cultures and regimes in the region. Imagine walking down the streets of your favorite European city, saying and doing the same things you would do there, but then gazing down the avenue to a mammoth monolith that is one of the hundreds of incredible mosques in the city. This is Istanbul. These are my anchor chains and train whistles. It’s not that I want to hear them… it’s that I must hear them.

I’m a snob. I am a travel and experience snob. I love to sit in James Bond movies and tell anyone who will listen, and a lot who will not: “Oh yeah he just crashed his motorcycle through the window of the Grand Bazaar, I’ve been there. I bought my wife some sandals like 20 feet from there. Oh yeah Macau, yeah it’s really like that, I took a boat right up to a restaurant just like Bond does here. That metro stop there, yeah I almost got mugged there, amazing pastries just up the stairs there.”

This snobbery is a more abiding and valuable form of snobbery. It’s empowering really because its so wholesome and real, not like the other varieties of monetary or entitlement snobbery. This type, in my estimation, is much more forgivable. I’d encourage you to embrace it.

“So neglect becomes my ally.” The old man in “The Count of Monte Cristo” taught his prisoner protégé this lesson. It applies to what WorldWanderlusting does, skimming off the inefficiencies. This is an ethical practice in many fields; securities, yogurt and butter production, and any sort of commissioned sales industry. With rewards programs, it’s no different. Contractually, these people are obligated to reward you with what you have earned, regardless of how you obtained it. Some may call it bottom feeding. Hell, they may even call me a bottom feeder. And I’m okay with that because, as previously discussed, I can be a snob too. They’ll say, “you’re a bottom feeder, a cheapo, an exploiter.” I say “Maybe I am, but have you ever been to Burma? How about Laos, or Croatia? No? Well this bottom feeder has.”

Geography is power, and geography, experienced first hand, is magnified power.
Economics, warfare, diplomacy, logistics, politics, culture, language, literature, and history all have to do with time and place. Now I’m not Marty McFly so I can’t help you with time, but WorldWanderlusting can help you with place if you’ll spare the time to learn and apply the tips and tricks they share so generously.

Understanding, gathering, and using miles and points makes me a sophisticated sultan of sightseeing, which I can assure you beats being a pitiful peasant of plainness.