Free Hotel Hopping on a Tour of Great Britain

I was amazed to hear that one of our most diligent wanderlusting fans was surprised to learn of the incredible “Buy one free night – get one free night” deal that Club Carlson generously bestows on holders of its already generous rewards points card.

So, let’s get it out there [megaphone voice] “Attention everyone: Club Carlson Premier Visa Cardholders get the last night of their stay free.  What that means is that if you book one night (with the 97k points you’ll have including the 85k bonus and the 5x points you get while meeting the $2500 spending requirement) you’ll get the second night free!!!”

I know that even if I yelled it til I were blue in the face, it wouldn’t quite connect until you were able to see how it would work for you when making vacation plans.  We’ve done this already with our post about a Florida Family Vacation, but let’s go big this time… I’m taking you to the motherland. England.

Our favorite “free-way” to Europe right now is the American AAdvantage shoulder season rate of 40k AA points for a RT flight from the US.  You can generally get these flights in April and October… times fewer people travel, but those are amazingly gorgeous times to be in England.  You can get 40k AA points with the Citi AA cards.

Another option would be United, but even at the best points-rate, you’ll need to cough up 60k miles.  If you already have Chase Ultimate Rewards, you can transfer them to United.

Delta will also cost you at least 60k.  If you just need to top off your account, you can get 30k with the Gold Delta Skymiles Card.

No matter how you do it, you’ll likely arrive in London in the early morning. You could also do this tour from Manchester(MAN) or Birmingham(BHX) if those flights happen to work better. We’ll assume you start and finish in London, which makes it a little easier.

You can rent a car for 10 days in England for less than $250.  Many of our trips are centered around renting a car because we love the freedom it allows you to go at your own pace and discover things on your own.  Book with Autoslash.com or Expedia and keep checking back for better rates as you get closer.  Most car reservations don’t even require a credit card and thus are totally risk-free.

Yes, you will be driving on the left side of the road.  Isn’t that exciting? That’s part of what makes this such a fun adventure. The other part will be attempting to spend an entire day talking to your travel companion in a British accent.  You need simple joys like this because with a few exceptions, the food in England is bland. 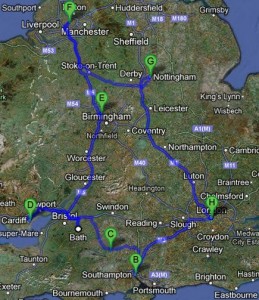 Arriving in London early, you step inside your fuel-efficient rental car and hit the road. You’re headed for Southampton, which, among other historic notes, was the port from which the Titanic departed, where you’ll at least want to see:

After lunch, you’ll backtrack a bit to make a visit to Stonehenge. Stonehenge is on almost everyone’s bucket list… and for good reason.  We won’t enter into the debate about what the site is or isn’t… regardless, it is an impressive site of historical import and you have to see it. Now.

Once you are done marveling at the mysteries of this site, head towards Cardiff, the capital of Wales, where you’ll stay the first two free nights at the Cardiff Park Inn, a category 3 hotel that will burn 28,000 of your 97k points for the two nights there. 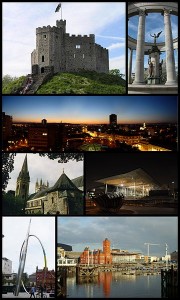 Spend it recouping from the drive on the first day.  You are in Wales, so you may even notice that some people are speaking Welsh. There are many ways to spend your time, but here are some ideas:

You’re on the road again today, but it’s not too bad a drive.  You do want to get on the road early though.  Make a stop at Tintern Abbey – the subject of Wordsworth’s contemplation. It’s worth a look. Then head directly towards Bath where the main attraction is, not surprisingly, the Roman Baths. Yet that is hardly all there is to see.  In fact, you’ll spend the better part of the day here checking out some of these beauties:

That night you’ll arrive at the Birmingham Walsall Hotel, a category 1 hotel where it will cost you 9,000 of your free points to stay 2 nights. I know it feels like thievery… just enjoy it. 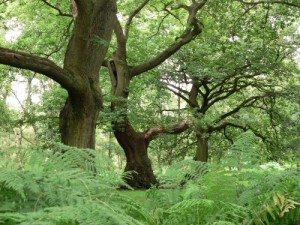 Today you have your choice.  You can opt for the metropolitan center of Birmingham, where you’ll find a combination of history and modernity.  Or you can opt to escape the city and head for the Cannock Chase Forest – one of few undeveloped areas nearby.  There you can walk or bike the trails and discover a wilderness that has played host to many a werewolf sighting.

After another free night stay, you’re on the move again – this time headed to Leigh, which is centered between Liverpool and Manchester. We’ll spend the first day in Liverpool, home of the Beatles. Here are a few things you should check out there:

When you’re all tuckered out, rest your head at the brand new Park Inn by Radisson Leigh. (15k points) 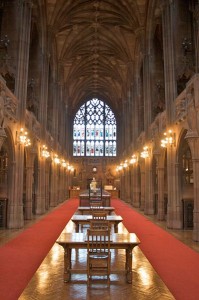 The reading room of John Rylands library – a cathedral to books

Now, to have a look at Manchester. You may want to park on the outskirts and ride the Metro in.  There are many things to see in this town, but here are some highlights:

Back to Leigh to rest for tomorrow’s adventure.

You’ll be in Nottingham tonight, so go ahead and let that invoke visions of Robin Hood.  That’s a great lead in, because en route to Nottingham we’ll take you by Sherwood Forest, which is just outside Mansfield.  There you can put yourself in the legend by visiting the Major Oak, an enormous oak tree which was Robin Hood’s main hideout.

If you happen to be there on a weekend, you can check out the Mansfield Marketplace – a 700 year-old tradition.

Or maybe you’re more of a literary fiend and you’d like to see Lord Byron’s hometown of Ravenshead, also nearby.

Either way, tonight you’ll land at the Park Inn by Radisson in Nottingham, where you’ll save yourself more than $220 on two nights for merely 15k of your CC points.

Waking up in Nottingham, it might be nice to feel like you’re in a little smaller town.  You’ve got a full day ahead of you though.  Here are just a few ideas to get you started:

So far you’ve stayed 8 free nights and spent 67k of your 97k bonus points from the Club Carlson Premier Visa.  That leaves 30k points left – just enough to get you two more nights in a historic hotel on the outskirts of London.  Club Carlson has the Park Inn by Radisson in Thurrock.  If you’re hoping to be right in the center of London, you could opt for the cash+points option and stay in one of their other fine properties.

I can’t even begin to tell you what you need to see in downtown London.  Nicole and I visited London several years ago and here were some of our favorites:

Two days is hardly enough to see London, and hopefully you’ll have time on this trip to stay even a little more.  Even if you don’t, you have countless memories from an incredible tour of Great Britain.

I hope you can grasp the amazing possibilities that are right there for the taking if you will just use your credit responsibly to obtain hotel and airline loyalty points that will open the door to the world for you.

I have a hard time even believing that I’ve just mapped out an 11-day tour of Great Britain with 10 absolutely free nights in hotels.  I know it sounds too good to be true, but read our “Doesn’t it Hurt My Credit” post and do some research on the subject.  We’ve been wanderlusting like this for more than 2 years and my only regret has been not getting an earlier start.

Finally, let’s get something straight… this is cool stuff and you don’t want to miss informative posts like this.  Why don’t you join hundreds of our other readers who subscribe to our posts by email?  You just type your email in the right sidebar and we’ll never abuse your information.