Sometimes when I tell people that I’ve been to Vietnam and that I really enjoyed my time there they look at me like I have a (guaca)mole on my face.  The give the look like, who would ever want to visit Vietnam.  I guess growing up in my generation and not knowing much about the whole conflict has given me a different perspective on the country. One thing you can’t miss are the Cu Chi Tunnels. I can’t wait to go back!

Please Note:  I have the highest respects for anyone who spent time in the service in Vietnam.  We lost many great people in the conflict and I mourn for the losses that so many families experienced from that time frame.  A big thank you to all those who served and currently serve our country. 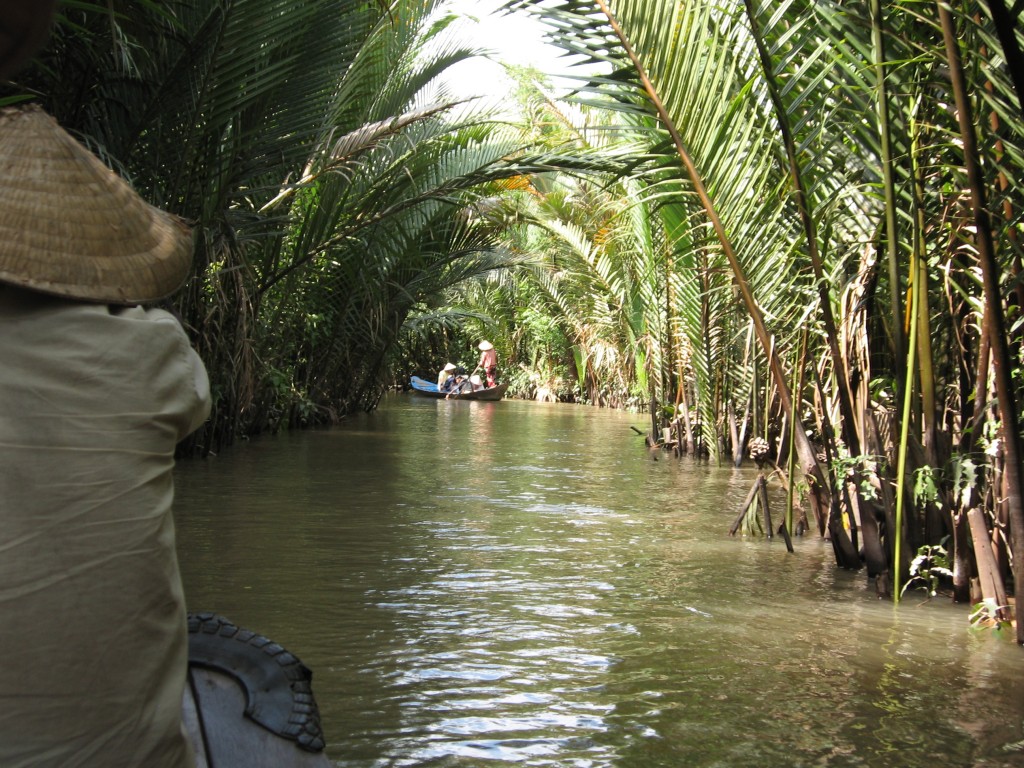 Vietnamese Mangrove on the Mekong Delta

I know this isn’t a history class, nor do I profess to be an expert on the subject, but having been there gives me a more unique perspective than someone who hasn’t ever seen the terrain.

Vietnam is beautiful.  They’ve got amazing beaches, wonderful hillsides, and dense jungles.  For us to show up in their backyard and try to fight them is not an easy thing to do.  It is tough enough to win at your own game, but to play one that you don’t know very well is going to be tough.

The people of Cu Chi were a group of native Vietnamese who were basically sick of people trying to run their lives.  The Chinese had ruled over them for 3000 years.  Finally the French liberated them, only to then rule them and put a heavy influence on them for the following 300 years.

This sounds like a great time for the USA to show up and to try and tell the Vietnamese what to do…NOT. They were so sick of governing bodies that their willpower was stronger than that of my 1.5 year old.  Basically they wanted everyone else to leave them alone.  Ho Chi Minh rallies the troops and tells them that we’re trying to come in and dictate what they can and cannot do. We felt the effects of their bottled up anger that was ready to blow. 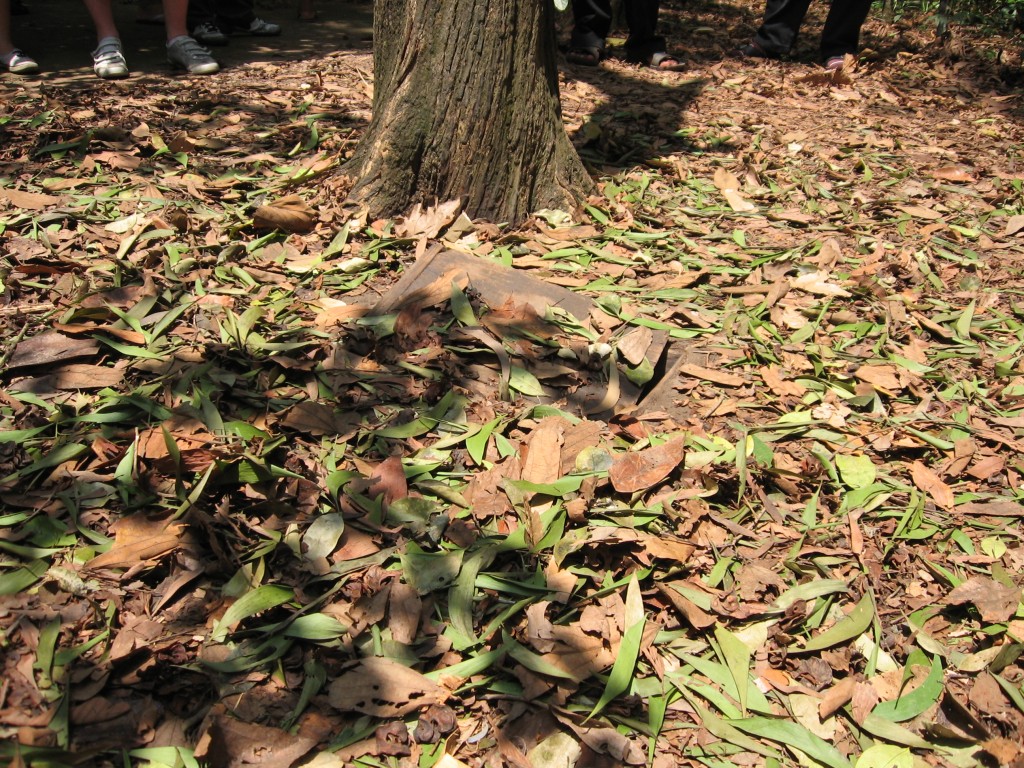 Cu Chi Tunnel. I’m underneath there.

This has to be part of your vacation when visiting Vietnam.  Going there without visiting the tunnels would be missing out on a big part of history.  Many companies offer day tours of the tunnels and the traps that these people used to fight against our soldiers.

Don’t worry about breaking the bank either.  You’re in Southeast Asia.  These tours usually run between $10-25 for the trip which includes the bus ride.  I’m just not sure how they make money on the deal, but it is beautiful for you.  Bring along a big water bottle because this place is hotter than Hades. 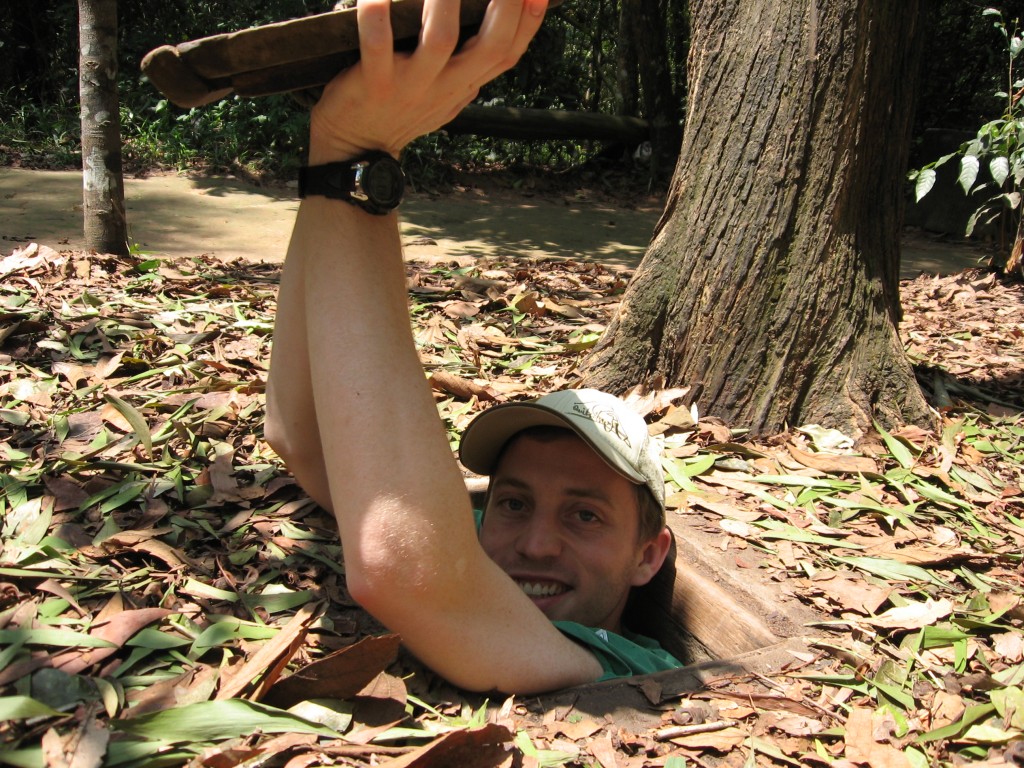 The People of the Cu Chi Tunnels

The Cu Chi people were very inginutative.  They lived roughly 40 kilometers from Saigon, as it was called at the time, but now it’s been renamed to Ho Chi Minh City.  There are tons of companies that offer day tours to the Cu Chi tunnels from HCMC.  Most of them will have a tour guide who speaks great English, and will explain everything regarding the tunnels.

They had fake entrances that would fool soldiers who mistakenly would think they had found an entrance to the tunnel.  Once they got to the dead end, someone was waiting there to take their life from another angle.

The Cu Chi people did everything underground.  They had hospitals that cared for the sick, homes, and even cooked underground.  Because helicopters were so prevalent during the conflict they knew that a smoking fire would direct a helicopter to the exact spot where the people were living.  For this reason they learned how to make fires underground and created a series of small rooms that were dedicated to absorbing the smoke from the fire.  When the smoke finally came from the ground it looked like this: 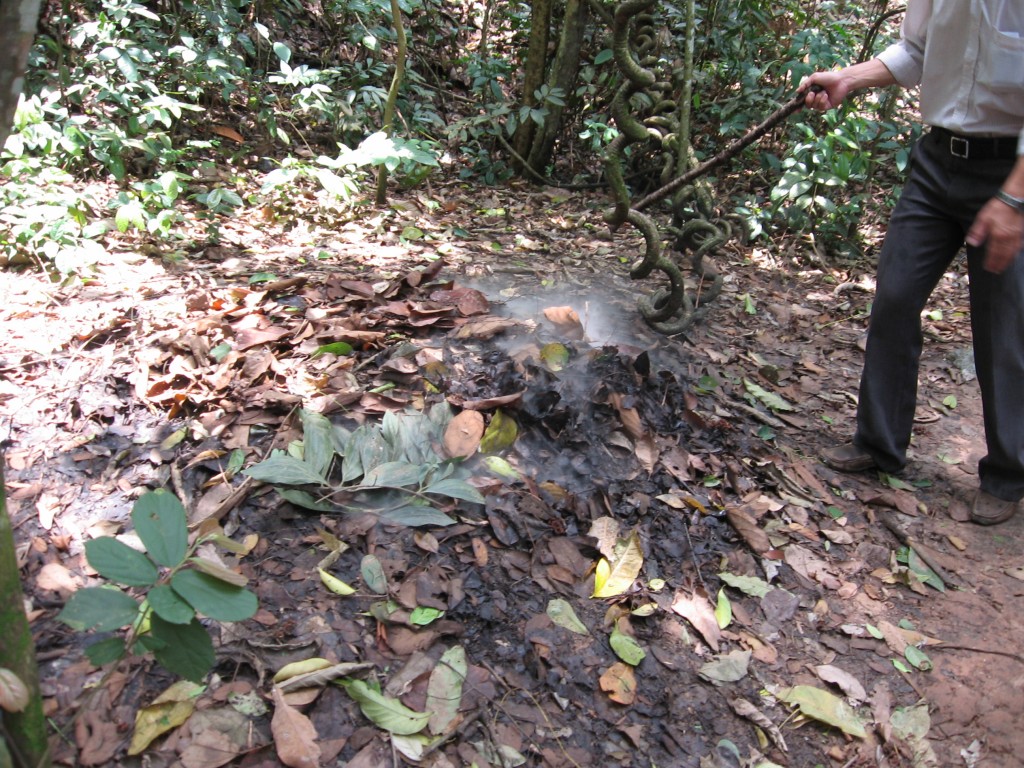 This would even be tough for someone on the ground to notice.  This way they were able to avoid the bombs from the helicopters and continue to live their lives.

Other things to see at the Cu Chi Tunnels

As a part of the tour they’ll give you the chance to shoot some heavy artillery.  Each bullet will probably cost you between $1-10.  It isn’t cheap, but the gun fanatic might drool at the thought of shooting an AK47, or other guns reserved for war.

They’ll also show you other traps that the Cu Chi people built to stop the Americans from treading on their soil.  Because it was their home field advantage the camouflage was all natural.  They had things like this that were disguised by leaves and soil. 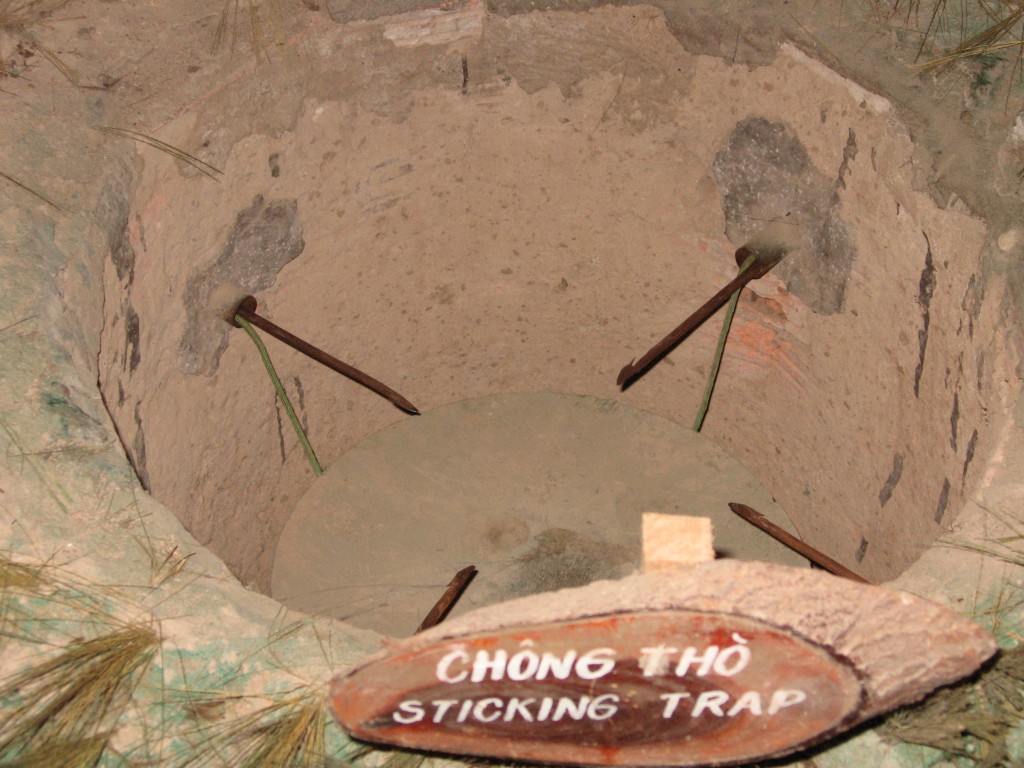 An American would step on the lever in the middle and the bamboo spines would stab them in the leg.  Not only would it hurt to be stabbed, but they would rub animal dung on the spines, so it would definitely cause an infection.  They were ruthless, and it makes me feel really bad for our soldiers. 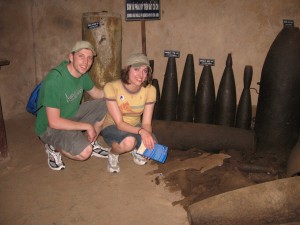 Check out all of the artillery that are remnants from the war.  They’ve got all kinds of bombs, bullets, and other types of things that were used against them.  Fortunately they don’t have any agent orange laying around.

Why you should visit the Cu Chi Tunnels

I was super grateful to have visited the Cu Chi Tunnels.  It gave me a much more comprehensive perspective of what happened to our soldiers, and why the conflict was so controversial.  I’m grateful to all those who served and risked their lives, but definitely questioning the motives of those making the decisions.

Travel teaches things that the books don’t.  Nobody in high school showed me these pictures.  Having been there has taught me much more than I ever could have learned in the classroom.  I recommend you make the trip so you can see, feel, and experience so much more than you could any other way.

It will emotionally help you to understand why a soldier returning from Iraq might have some struggles.  We really need to show more appreciation for our men and women in uniform as they sacrifice so much for us.