St Augustine, Florida: The Most Historic Place in the US

In our recent Florida Roadtrip loop with free Club Carlson Hotels, I raved about the town of St. Augustine, Florida.

Founded in 1565, St. Augustine is the oldest continuously-occupied settlement by Europeans in the continental United States. Its history is rich with mega-characters from every century – Ponce de Leon claimed the region in the early 1500s. It was looted by the British privateer, Robert Searle, in the 1600s.  In the 1700s, it played host to the War of Jenkins’ Ear, and French and Indian War.  In the late years of the 1800s, it was popularized with tourists by the oil baron, Henry Flagler. And in the 1900s it was a theater to the civil rights movement with Martin Luther King, Jr. himself.

Every year, hundreds of thousands of tourists flock to nearby Orlando, Florida, mainly families, taking their children to see the theme parks, while only thousands take the opportunity to visit St. Augustine. I’m going to urge you to be among them.

Panorama of the Castillo de San Marcos fort in St. Augustine, Florida, USA. It was made with Hugin by merging four pictures. (Photo credit: Wikipedia)

The main attraction is, of course, the fort – Castillo San Marcos, built by the Spaniards in 1672, the oldest of its kind in North America. If you’ve seen these before, they don’t vary much, but nonetheless, there’s nothing like standing near an ancient cannon, which may have hardly budged in rigid defense over some 400 years. 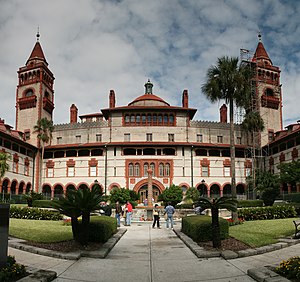 The old Ponce De Leon hotel (built by Rockefeller partner, Henry Flagler), is now Flagler College, and was built in a time in which money wasn’t as much an object as was building something that would shock and awe the senses of visitors. So, yes, today… some 120 years later, your senses will be both shocked and awed.

The newly re-conditioned Colonial Quarter living history museum will transport you back in time to the Spanish colonial period – with demonstrations of blacksmithing, woodworking, and a visit to the record-keeper whose tales are as intriguing as his calligraphy is ornate.

You’ll be entreated to a variety of palatal pleasures as ethnic foods have converged here over centuries.  Take your pick from British pubs, Spanish cafes, or Caribbean cantinas.  Of course, as with any tourist trap, fudge shops and ice cream parlors also abound.

I’m leaving out so much – you could board a pirate ship, stroll the beach, or window shop in quaint stores along cobblestone walkways.  There are other museums and mesmerizing bits of history. It’s really just something you’ll have to see for yourself – and something you can do with free hotels if you follow read our post:  Florida Roadtrip loop with free Club Carlson Hotels.

If you liked this post and the idea of taking advantage of frequent flyer mile opportunities to see the world, why don’t you subscribe to our email list so we can keep you up to date on everything that’s out there?  Just enter your email in the right sidebar and keep wanderlusting with us!