Children Afraid of the Water

Our recent trip to Panama was a warm welcome to our freezing temperatures in Idaho.  At one point before the trip there was a 111 degree difference between Idaho and Panama.  Living in Idaho really limits the amount of time that you spend at the beach.  Our little boy Max had been to the beach a couple of times, but had never swam in the ocean, and it had been a while since he had even been in a swimming pool.  It was time for him to get wet.

We were so exhausted from the journey that we first wanted to just walk along the beach with our toes in the sand.  No swimming suits quite yet, as we just wanted to soak it all in first.  Max, however, didn’t want to get in the water.  I barely caught this photo showing his apprehension, as he was afraid of the water washing onto the shore.

You can see that the sand looks soft and the water looks clean, but he was still not welcoming the idea. I wasn’t sure what to do, because I obviously didn’t want him loving the water so much that he ran off in it alone, but I also didn’t want to stay out of the water because he was afraid of it… It was a tough spot to be in. We waited a little while before putting on our swimming suits and heading for the warm ocean water. The San Blas archipelago is an phenomenon of roughly 360 islands just off the northern coast of Panama. The Kuna Yala Native Americans inhabit these idyllic islands.

I first tried walking him into the water, but that resulted in screams and yells.  Obviously that didn’t work.  My next choice was the quick entry.  I picked him up and carried him into the water.  At first it didn’t seem very successful as the crying continued.  I kept him there for a couple of minutes when I decided to give up.  I walked out of the water and onto the shore.  I dropped him off by his mother, so she could watch him as I headed back into the water.  I hadn’t taken but a couple of steps when the crying stopped.  I turned around and Max was headed right for me.  Apparently he had changed his mind and he wanted into the water.

I picked him up again and took him into the ocean for the second time, and instead of tears, this time came laughs and splashes.  It had been a great success and he was super excited to be back in the water. 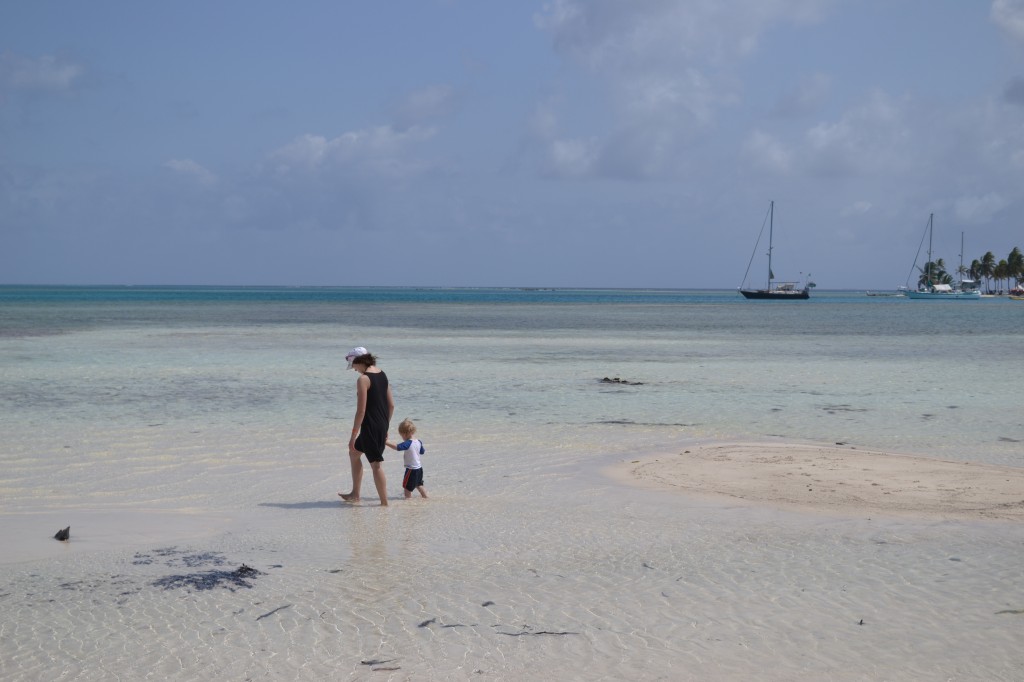 From that point forward, we never had any trouble getting him in the water. He enjoyed the waves washing up onto this feet, and welcomed the warm water. It felt like a great success to me, as I had helped him overcome a fear. Not that I’m proclaiming to be some amazing dad for this, but it was really cool. It feels rewarding to be a part of his life. Taking him on trips is going to be a major part of him growing up. You have to create experiences for your children that they’ll never forget. Create moments that will last a lifetime. That is what traveling will offer your family. Start today by subscribing to our blog – put your email address in the upper right hand corner of the homepage. Keep wanderlusting with us.

Were your children ever afraid of the water?  What did you to do help them to overcome the fear?  What suggestions do you have for other parents out there?

4 Responses to Children Afraid of the Water