How to Visit British Columbia

Let’s face it.  You’ve definitely considered visiting the wonderful land of British Columbia.  Since childhood I remember hearing about Whistler Blackcomb and seeing the forests of BC.  It doesn’t matter whether or not you ski, snowboard, or neither, this place is beautiful.  I know Canadians always say that the best part of the Rockies can be found in Canada, and I might be lying if I didn’t think that was true.  Many people want to visit British Columbia, but they don’t know where to stay, etc.

My only personal experience of BC isn’t in Vancouver or Victoria, but I’m telling you that the best motorcycle ride of my life was done through parts of BC.  You can read about our BAR(Big Awesome Ride) 2011, Part 1 and Part 2.  The feeling is often called motophoria, and is basically indescribable, but if I were to describe it it would be peaceful.  There just isn’t much like riding your bike a dusk as you cruise alongside a running river.  The mountains in the background glisten like gold as the sun reflects off of the massive granite peaks and their reflection is seen in the water.  With your music cranked up loud taking the curves of the river in a band of other bikes is unlike anything else.

You can obviously tell that my only experience with British Columbia was defintely a positive one.  Next time I want to make it over to Victoria to see the bay, the mountains, and hopefully hit the slopes sometime.  With the Canadian dollar basically at parity with our failing currency you’ll notice that things are rather expensive.  Most things feel about 20-30% more expensive in BC than they do in the states.  This goes for hotels as well.  Back in 2011 when we stayed in Cranbrook, BC we paid $140 USD for one night in a Days Inn.  Heading to a bigger city like Vancouver would only increase the price.

How to Pay for Hotels in Vancouver, BC

Paying $140 for a hotel is way more than I like to pay.  In fact, I prefer to pay nothing.  That is exactly what I’d like to show you, is how you can pay nothing for up to eight nights  at one of these three hotels in the Vancouver area.  Sound too good to be true?  Saddle up, and you decide.

offers 25,000 Bonus Starpoints once you’ve spent $5000 within the first six months of card membership.  All three of these hotels will only cost you 3000-4000 Starpoints per night as they fall into the Starwood Preferred Guest Category 2 hotels. 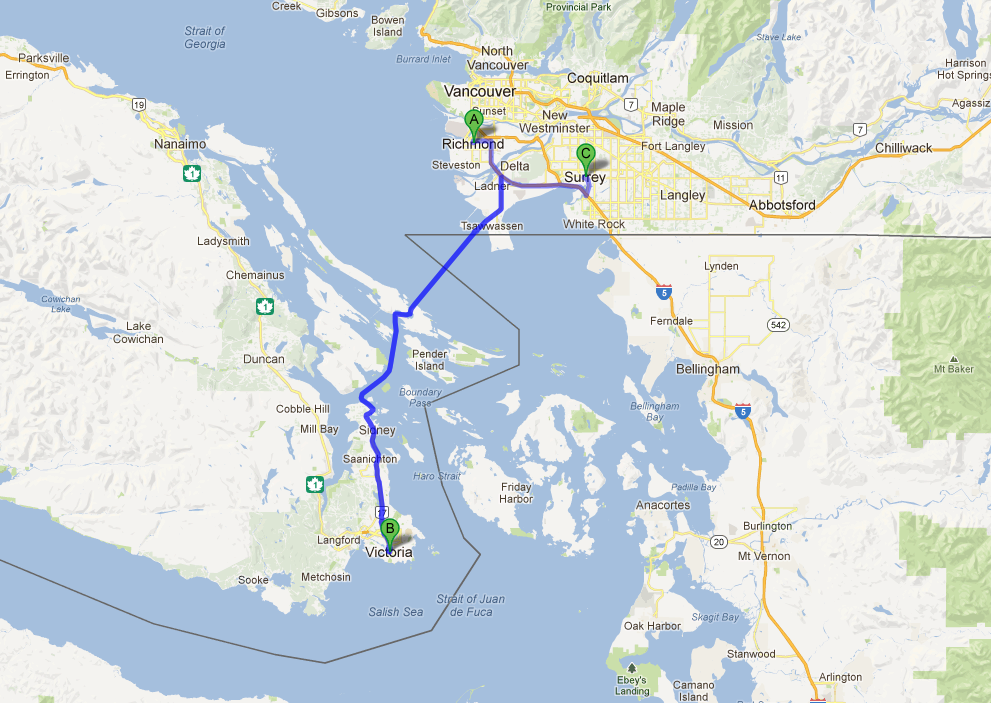 These are not Days Inn hotels.  Believe me, I’m still wishing that I never would have swam in their “pool.”  It was more like a swamp than a pool. Yuck.  With these three locations we are talking absolute luxury hotels on your vacation to BC that will definitely shave on your overall trip costs.  Your sweetheart will never forget the time that you actually picked an “expensive” hotel, but little will he or she know that it was free ;).

What would you do when you visit British Columbia?

How to Get to British Columbia

You’ve really got two options.  Flying into Seattle, and making the drive will save on the taxes of the flight.  Making the flight an international flight will make your taxes more expensive.  You can basically fly anyone into SEA.

Flying into YVR, or Vancouver International Airport is also a much closer airport, so if you’re only going for the weekend, you should fly into here.  The major carriers are all going to make the flight, so find the cheapest one, or use some of your frequent flyer miles to lower the cost of your trip once again.

This is one of the earliest inhabited parts of the Pacific Northwest.  It’s mountains will stun you.  You’ve gotta go visit British Columbia.

2 Responses to How to Visit British Columbia