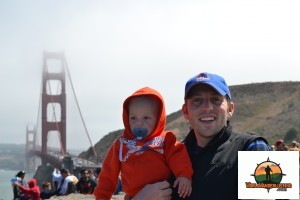 If’ you’ve never been to San Francisco, you’re missing out.  After visiting hundreds of cities across the globe, this is one that you can’t miss.  There is nothing quite like it because of its landscape, history, and culture that you can’t seem to find anywhere else.  One of the most important things to do when visiting the city, it to take a trip on the historic Cable Cars.

According to the source for San Francisco Travel, the first line started operation on August 2nd 1873.  After riding on the car you’ll realize that not much has changed since then.  They must be going for the vintage look, because the paint is peeling off the walls, the benches are loose, and you feel like it’s going to lose its brakes at all times.  This isn’t for those with a weak stomach.  It is more like a roller-coaster than a train ride. 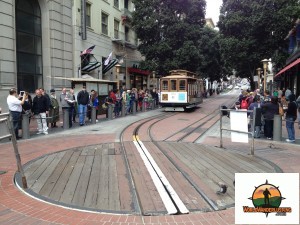 In a world where everything is being ran by computers, and manual labor is a thing of the past, a ride on the Cable Car will help you to realize that this isn’t the case everywhere.  No computers run these things, it is all based on the cables that are buried below the streets of San Francisco.

The gripman is what they call the “driver.”  He has a huge lever that controls the speed of the car, as well as a footbrake for any emergencies.  The guy who “gripped” our car was absolutly ripped.  Each time we fired it up after a quick stop he would grab hold of the lever and pull it back with all his might.

The turnaroud is also a very manual process.  The car comes to the end of the line and stops on a Rotating disc.  The gripman and his attendents hop off the car, and manually push the car 180 degrees, putting it heading back the other direction.

Don’t get me wrong.  It’s not that I think you shouldn’t ride it because you’ll fall off, it is just different than riding a bullet train in Tokyo.  These are a taste of history, and the flavor is something that you’ve got to try sometime in your life.

Beating the Long Lines for the Cable Car Ride

They’ve got three lines that are still running today.  With almost 10 million passengers each year they are busy non stop.  You might assume that waiting an hour (or two) is necessary, but there are a few secrets that will cut down your wait.

Beating the crowds might require some counter-intuitive thoughts.  Although it sounds attractive to start at Powell St in the early morning because that is where the Bart drops everyone off, but that is going to put you waiting in line forever. 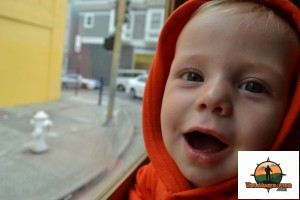 The solution?  Ride from the piers early in the morning to Powell St, or in the evening from the Powell St station to the Piers.  Good luck on catching the cable car in the middle of its route.  At least in July when we rode the thing I did what everyone else did in the morning and ended up waiting an hour and a half for the ride.  Plus you pay $6 to ride the thing, so make sure you get your $$ worth by riding the full thing. 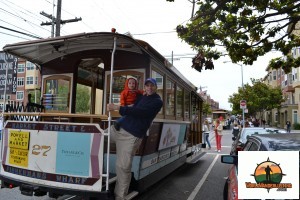 In the parked position

Also you can assume that the people hanging off the side of the cable car are the first spots to go.  Trying to ride the cable car with a one year old child just didnt’ allow for us to hang off, or he would have been jumping off the thing.  We opted for an inside seat, just to make sure that Max wouldn’t get any crazy ideas.  After all….he is my son….

Why you need to go 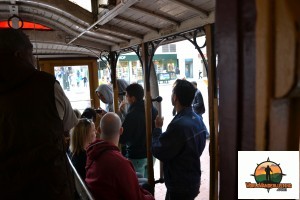 The gripman and coveted spots

The ride only takes about 3o mins to complete, but it is very memorable.  You climb up some very steep  hills and get some amazing vistas of the city.  Our car stopped in the middle of the road at the highest point of the ride so we could look out into the bay and over the city.  Everyone was snapping pictures and wishing the had the hanging off spots.  If I were to do it again I’d take a hanging spot, just because that is my style.

Your kids will never forget SF.  I went when I was in high school with my parents and my little brother.  We had an absolute blast going and I still remember the trip today.  Keep in mind that this isn’t a cheap place to visit though.  That is why you need to get your airfare for free at least, which can help you to afford a few trips on the cable cars.

Start worldwanderlusting with us today by planning your trip to San Fran and get the Chase Sapphire Preferred to help you get those flights.