WorldWanderlusting operates under the simple premise that travel need not be expensive.  Don’t get us wrong, you can spend thousands of dollars on ill-prepared, unimaginative travel – and plenty of people do.  We just prefer to prepare and be imaginative – something that has a tendency to equate to incredible headlines like the one that brought you here.

We’ve raved to you about the flexibility of Chase’s Ultimate Rewards – the points accumulation program which invokes some reverence and a solemn bow from those of us who study these things.  It is the flexibility that makes these points so valuable.

Hagia Sophia has been an Eastern Orthodox cathedral, a Catholic cathedral, an Ottoman mosque, and a museum in its 1500 year lifetime. The marble and mosaic mecca is a cornerstone of history in a city that has been a central stage for the better part of the history of the globe.  The dome in the building’s center rises more than 180 feet and would seem surreal even without the small arched windows that illuminate it in such a way as to give the impression that the roof is floating. 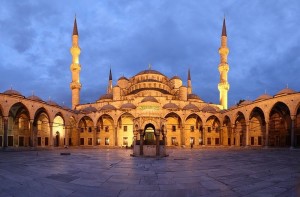 If Istanbul still lacks intrigue, perhaps you’d prefer to visit the Blue Mosque, which, while not as old as Hagia Sophia, has incredible appeal inside with an impressive array of hand-made tiles, stained glass windows, and ornate chandeliers. The outside doesn’t disappoint, either, with tall minarets, an open plaza, and an abundance of arches. 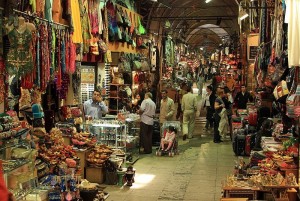 More of a shopper than a history buff?  How about an epic combination?  The Grand Bazaar lives up to its name.  It consists of more than 3000 shops, each featuring unique products and aggressive salesmen.  If you do decide to go, you’ll be one of some 250,000-400,000 who visit every day.  It’s a market whose history predates our entire country, and whose setting is unmatched.

One more teaser on the wonders of Turkey comes in the form of a fellow blogger friend’s story about his first (and likely only) experience in a Turkish bath.

We could go on and on with the many sights and experiences you could have on a trip to Istanbul, but I get the sense that you don’t need much more convincing.  Now, what you do need is the WorldWanderlusting tip on where and how you can stay for free.

We raved about the Ultimate Reward Points because of their flexibility – you can transfer to a number of other programs – one of which is the Priority Club (Holiday Inn, Candlewood Suites, Intercontinental Hotels).  Priority Club has a series of special offers on hotel properties around the world at discounted point rates – Point Breaks. These special offers allow smart, imaginative travelers to book hotel rooms around the world for just 5000 points per night.

As you were hoping, it just so happens that hidden among the Priority Club European Point Breaks, you’ll find a brand new Holiday Inn property in the heart of Istanbul. If you could get your hands on 40,000 Ultimate Rewards points, you could transfer them to a Priority Club account and stay eight free nights in downtown Istanbul. (Not to mention the free breakfast every day).

How could you scrape together 40,000 Ultimate Reward points? I’m glad you asked, because it’s relatively simple.  Apply for the Chase Sapphire Preferred card and meet the minimum spending requirement of $3000 in the first three months, and all 40,000 of them will show up in your account – you’ll be well on your way to Turkey.

If you have a business and could spend $10,000 on a card in the next three months, you might also want to look at the Chase Ink Bold card which will get you 50,000 bonus points and multiple-point-earning capabilities that make this the best travel-rewards business credit card available.