Girls’ Weekend in LA: Free Flights for Five Thanks to British Airways

Posted on October 7, 2012 by Brad Christensen

When the British Airways Credit Card with 50,000/100,000 bonus Avios deal first came out, we did exactly what we do best at WorldWanderlusting… we started wanderlusting – dreaming of where we could go without paying for anything.  Our objective?  Maximize travel experience and minimize point usage. It didn’t take us long to figure out a strategy that would allow the Avios to stretch.  Using the British Airways Avios Calculator, we sought out direct routes on BA’s partner, American Airlines, that were just below the 750 mile maximum at the 4500 Avios level – the two standouts? SLC-LAX and BOI-SEA.  Other routes existed, but we tend to think about options in our area.  Some quick math told me that with the 50k Avios we got on our first purchase, five and a half people could get in on the action!

I then did what all wanderlusters should do – I asked myself three questions – Would applying for this card hurt my credit? Would I be able to meet the spending requirement without making purchases I wouldn’t otherwise make? And, if I had this card, would I have the discipline necessary to not make frivolous spending decisions and to pay it off in full immediately after use? “No”, “no”, and “yes” were my answers, so I applied and was approved instantly.

Thinking selfishly, as men often do, I started daydreaming about an Alaskan cruise with the boys out of Seattle… that was sounding pretty good until I started thinking New Years and the Rose Bowl in LA.  I went on and on with “man-cation” daydreams until it came – abruptly – the thought that my wife, who spends the better part of every day fetching sippy cups, sopping up spilled milk, and mediating sibling rivalries, might actually have designs of her own. 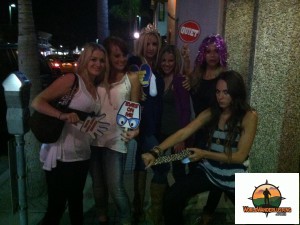 I then did another thing men often do – I made a rational calculation.  Did I stand to gain more from using my freely acquired points in selfish pursuits?  Or would I benefit from some well-intentioned generosity? 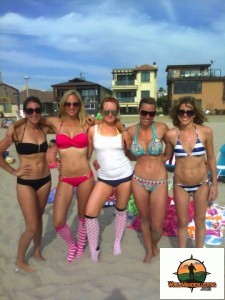 Pretending like I had never considered, nor was ever capable of, any alternative use, I volunteered them to Nicole – masking my wince as I offered that she might really enjoy a weekend in Southern California with some friends.  Peeking above a stack of laundry as tall as her, I saw her eyes light up with emotion and I knew my coldly-calculated rational decision was warmly-received.

Nicole started doing her own daydreaming – mostly consisting of beach volleyball and relaxing in the sun (I’m fortunate to have a wife who cares little for the shopping scene of LA – thus my quick answer earlier about credit-card discipline). 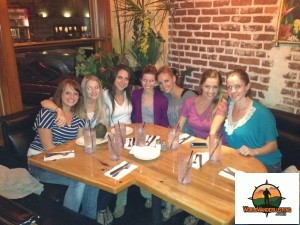 When it came right down to it, more than just five and a half girls wanted to go – they had a total of seven – and that meant using one of our many hotel point programs for free lodging would require two hotel rooms a night, or possibly even more.  Nicole’s only demand was beach-proximity – something best obtained in personal homes like what you can find on www.airbnb.com.

They were elated to find a well-decorated, perfectly located, two-bedroom condo, where they could be accommodated for about $60 per person per night.

They enjoyed the sun, the sand, and even a little shopping, ate at great restaurants, and enjoyed the freedom of the weekend – a mom retreat that met needs that don’t often get met. For me it was a daddy’s weekend and hopefully a downpayment on the next “man-cation” I dream up.

How do you get British Airways Avios and have a getaway of your own?

Well, you could try to fly dozens of expensive flights to possibly eventually get enough for one measly trip, or you could opt for the WorldWanderlusting method of using your credit responsibly to maximize travel rewards and live a fuller, more vacation-filled life.

The British Airways Card – 50k Avios when you spend $1000 in the first three months, (and more if you keep going). Click here:

The Chase Ink Bold or Chase Ink Plus card (for business) both give bonuses of 50k Ultimate Rewards which can transfer to British Airways (or other programs) when you spend $5,000 in the first three months.

The Chase Sapphire Preferred (personal) gives a bonus of 40k Ultimate Rewards which can transfer to British Airways after you spend $3000 in the first three months.

8 Responses to Girls’ Weekend in LA: Free Flights for Five Thanks to British Airways