What Do You Love About Traveling? 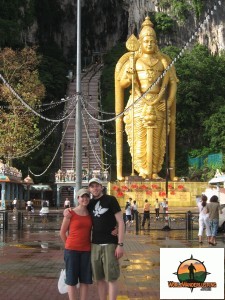 Sheldon and Shae at the Batu Caves

Mark Twain once wrote, “Travel is fatal to prejudice, bigotry, and narrow-mindedness, and many of our people need it sorely on these accounts. Broad, wholesome, charitable views of men and things cannot be acquired by vegetating in one little corner of the earth all one’s lifetime.”

All barriers came down for me in 2009 when I was sitting on a bus headed toward the Batu Caves in Kuala Lumpur, Malaysia.  I was seated next to a Muslim guy about my age who was speaking in broken English  Even though he was raised as a Muslim and I had been raised as a Mormon, I realized that many of our teachings were the same.

Although there is still a dispute as to whether Isaac or Ishmael claimed the birthright, in the end we both had been taught to follow high levels of integrity and character.  He talked about the avoidance of alcohol, wearing modest clothing, and living a chaste life were all teachings he had received as a youth.

Sometimes living in America you get the idea that Muslim=Taliban.  Never had I been so narrow minded personally, but those people exist.  Living in “one little corner of the Earth” doesn’t allow for open-mindedness unless you travel.  I love travel because it opens my view and helps me to see more clearly.

Expedia recently released a few touching videos about why people love traveling and how it has affected their lives.  The marketing campaign’s goals are to motivate people to travel and find their purpose, passion, love, calling, curiosity, etc.  The videos will warm your soul as you see how travel can truly change people.

Last year a local doctor spoke to his employees regarding his two week trip to Tanzania.  He had gone on a service mission, and was working in a rural hospital performing surgeries for the local tribes.  His slideshow showed victims with their before and after pictures.  The results were astonishing.

The lives that he changed will be forever grateful for his trip to Tanzania, however the doctor walked away as the person who was most affected.  He worked to raise thousands of dollars to send to the hospital for new equipment.  He has recruited other physicians that will join him next year.  Realizing that his life was rather abundant, he has made sacrifices to make the lives of others significantly better.

Doesn’t everyone dream of eating crepes in Paris?  What about eating a bratwurst with mustard in Germany?  There isn’t much like eating a gelato while admiring St. Mark’s Basilica in Venice.  Foods enhance your travel experience, and in some cases are the reason for travel.

I’ll never forget the time when I was in Paraguay and a few locals invited us over for a special dinner.  The father of the family was having a birthday so they were going to have a birthday celebration by cooking akayvype.  For those of you who don’t habla Guarani, that means a cow head cooked underground.

The table was set, everyone had a utensil, which left only the unraveling.  My level of anxiety grew as they peeled back the multiple layers of tin foil.  The entire head laid on the table when they were done and I was nervous.  As everyone was about ready to dig in, I reminded them that this might be the time for a prayer.  Of course I requested to offer the prayer, and I gave one of the most heartfelt prayers ever.

Once the prayer was over the party began.  Everyone was scraping, cutting, and munching, but I was still apprehensive.  One friend who was with me insisted that I needed to try the tongue.  He pried open the mouth of the cow head and put his fork into the tongue.  The knife came next as he cut a morsel from the tip of the tongue.  He gave it a long, hard look and placed it in his mouth and began chewing.

This wasn’t macaroni and cheese, or the enchiladas that my mother made me in the comfort of my own home.  This was far from my comfort zone, but was definitely in theirs.  This was a delicacy that was rarely enjoyed, yet they were sharing it with me.

The pressure was ON for me.  I took down a very dry swallow and took a couple of steps toward the head.  Everyone around me seemed to be enjoying the food.  I was the only nervous person in the room.  Things almost went silent as I cut a small piece from the mouth of the cow.  All eyes were on me and I knew there was no turning back.  The pause felt like an eternity, but in reality was probably a few seconds.

When it entered my mouth I had an expectation that it would be repulsive.  Instant vomiting would occur because it was going to be so nasty.  Unexpectedly, I was pleasantly surprised with the flavor.  It was MUCH better than I had expected.  In reality it was delicious.  The room roared with a cheer as I had taken my first bite.

In that moment I felt like I had taken part in their culture.  They had adopted me as one of them, and I realized that we weren’t so different.  Just because minestrone soup is my favorite meal that my mother made for me, and akayvype is the favorite of theirs.  I’m so glad that I didn’t listen to my mind, but I did my heart.  The experience will always stay with me as a special moment.

Why do you love to travel?

It is too common for people to live within a bubble, and never experience other foods, cultures, or people.  Don’t allow cost to prohibit you from Finding Yours.  Become a WorldWanderluster and learn how to save thousands on your travels.  Today I’ll be flying to San Francisco for free.  I’ll stay in the Sheraton Four Points for free.  You guessed it.  My activities will cost me maybe $300 for a weekend in San Fran.

We would love for you to share your experiences with us.  Let us know of moments when travel has made a huge impact on your life, because others need to know about it.

Start WorldWanderlusting today with the Sapphire Preferred from Chase.  Currently the offer gives $500 in travel when spent through the Chase Ultimate Rewards Portal.

This entry was posted in About us, Fun Travel Stories, How to Wanderlust and tagged cultural travel, culture, expedia, find yours. Bookmark the permalink.

6 Responses to What Do You Love About Traveling?