Racking up 188,000 Club Carlson Gold Points within the last two months has started a fire in my pocket. As always, I’m looking to optimize my usage of the Gold Points with low level redemptions.

I’ve put together a Club Carlson Trip through the Baltics.  This trip takes advantage of hotels in St. Petersburg, Tallinn, Riga, Vilinus, Kaunas, and Klaipeda. 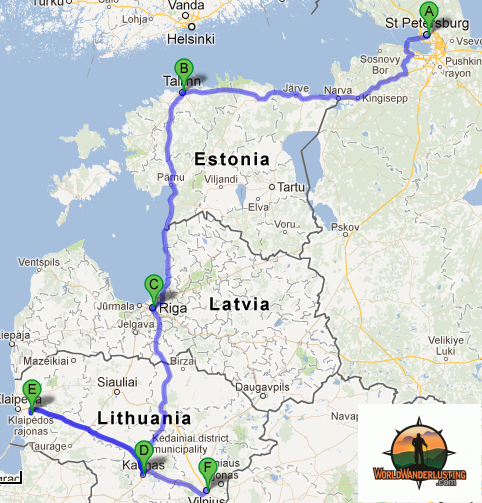 Club Carlson Hotels in the Baltics

The Baltics is an area which is rich with history and unique culture.  To be honest I didn’t know much about the area until I started this post.  For some reason I had assumed that their languages were all very similar to Russian as they had been a part of the USSR, but I was very wrong.

This trip will take you to four countries, and you’ll get to experience at least four different languages.  Although Latvia and Lithuania have similar languages, they are not mutually  intelligible.  Estonia is more like Finnish than any of the other Baltic countries, but I get the sense that you won’t be learning Estonian overnight if it is anything like Finnish.  Finnish is categorized as one of the most difficult languages in the world.  Good luck on your language studies before the trip!

As you might guess, your Baltic adventure will take you through a series of invasions and takeovers.  Estonia, for example, has been ruled by the Danish, Swedish, Germans, and Russians.  You’ll find evidence of Nordic people as this area was used commonly as a port for the Vikings.

Welcome to the city where Lenin arose to power to lead the Soviets against the Germans in WWI.  This is the northernmost city in the world with over a million people in population.  The Russian culture is a very different to that of most of the Western world.  Leave your smiles at home and your round-toed shoes in the closet if you have any interest in fitting in here.

Parks are plentiful and are usually well manicured.  The Soviet styled housing brings back feelings of the Communist Regime that ruled for over 40 years.  You will love their beautifully decorated metro stops, which are attraction in and of themselves.  Study up on your architecture before you go to learn about styles and identify them on your trip.  Try to learn how to pronounce the Cyrillic alphabet before you go too.  Some words sound similar to English if you can learn to pronounce them.  Remember that their signs are going to be in Russian only, don’t plan on reading anything in the greek alphabet.

Find yourself tonight at the Park Inn Pribaltiyskaya (good luck pronouncing this place).  It is a Category 1 Club Carlson Hotel, which means it is only 9000 Gold points.  Hit up the close waterpark or take the free shuttle to downtown St. Pete’s.  Either way this place is not going to cost you a single Ruble with your recently acquired Gold Points. 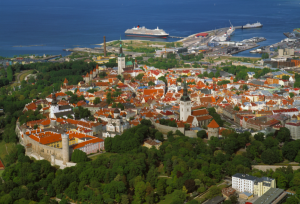 Hearing about Estonia will always remind me of the 1992 film, Encino Man, with Pauly Shore and Sean Astin.  They claim that the Neanderthal that they found in Sean’s backyard was an exchange student from Estonia.

The city center has a Medieval feel, and it has named itself the “Best Preserved Medieval townhall in Northern Europe.”  They have a living history museum (one of our favorite kind of attractions) just outside the city and if you go during midsummer or Christmas they have traditional food, music, and dance.

This is one of the most technologically advanced cities in the world.  You’ll find free Internet everywhere in the city, so you can upload your photos to Facebook and Twitter and Skype your friends.

Helsinki is just a few miles directly north of Tallinn, so if you’ve ever dreamt of visiting a Finnish sauna (who hasn’t?), this would be the time to make the hop over to Finland.

Tonight you’ll be staying at the Park Inn Central Tallinn hotel for a measly 9000 Gold Points.  Plan on staying a couple of night to soak in the cultures, foods, and sights, because your 188,000 would get you almost 21 nights free at this hotel alone!! 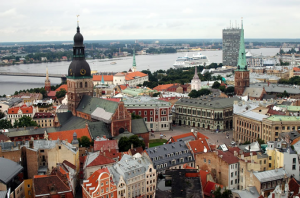 This will be your most “expensive” hotel of the trip.  There are three to choose from and all are Radisson Blu hotels.  Each night will burn up 28,000 Gold Points here, so plan on keeping this place to just a couple of days or you’ll burn through the points quickly.

Latvia is loaded with museums and the history of its various occupants.  Plan on spending some time at some of the museums and enjoy their history, arts, and culture.  Old Town Riga will impress you with its history.  From Tripadvisor…

The Soviet War Monument (with fresh flowers still laid daily) is a must and highly controversial, as is the Occupation Museum (free entry,but give generously, its very moving), Also, visit the Museum of the Latvian People Front, whose exterior gives the impression it’sbeen closed since 1967, but this tiny tiny place is great because of the enthusiatic staff and eccentric painter, whose studio is above this third floor museum. 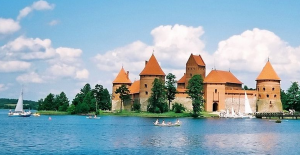 You’ve got three cities to visit in Lithuania that all have low level redemptions for the Club Carlson hotels.  The hotels in Kaunas and Klaipeda are both category 1 hotels for 9,000 Gold Points per night.  The hotel in Vilnius is a category 2 for 15,000 points.

Unfortunately, this place was entirely steamrolled in the 1940’s.  Germany came in an killed thousands of Jewish people.  When The Russians booted them out they sent lots of Lithuanians to Soviet camps in Siberia to do who knows what.  It should come to you as no wonder that Lithuania was the first country from the USSR to declare its independence.

Summertime is the best time to visit the Baltic countries.  Sunlight will fill your days and nights because of its longitude.  Hit the beach and enjoy the soft sand of the Baltic Sea.

I find it interesting that these countries have been strong enough to stand on their own despite the barrage of occupations from Russians, Germans, and Swedes.  Countries like Spain and Italy roped in various diverse cultures and made them one country, yet the Baltic countries have managed to maintain their own identity.  Each country still uses their own currency and speaks its own language.

Fortunately for you the hotels are free because of your diligence on the Radisson Big Night Giveaway Promotion.  Take those 188,000 Gold Points and put them to use in this wonderful trip through the Baltic States.

Score $500 toward your flight with the Chase Sapphire Preferred