Staying at a Days Inn with a pool doesn’t always mean that the pool is going to be a great one.  I actually was rather dismayed by the pool, and felt like I needed to shower after swimming.  Luckily I was able to sleep on a bed that night but having six grown men in one bedroom meant that some were sleeping on the floor.  That is a hard thing to do when you’ve been riding on a motorcycle for 8 hours. 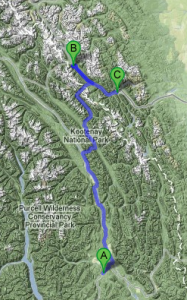 As we were all getting loaded onto our bikes at the beginning of the morning I noticed that something was wrong instantly when I let out the throttle.  I stopped, dismounted, and felt rather dismayed when I realized that my rear tire was flat.   I sped to the nearest shop and requested that they fix the tire.  The wait would be over an hour, which was a depressing thought when I knew that I would be holding everyone up.

Luckily the next destination was the shortest distance of the five day trip.  We only had to travel from Cranbrook to Banff (As you can see on the left).  However, our first stop would be Lake Louise.  The picture to the left tells everything about the terrain.  As with most of the Rocky Mountains they run from north to south and have valleys between the peaks.  The mountains on both sides of the valley are gigantic granite peaks with majestic green trees and waterfalls throughout.  The speed limit is only 55 MPH, but you wouldn’t want to go any faster for fear that you might miss some of the majesty (Plus a Mountie might try to catch you). 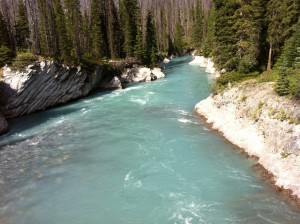 The water in the national park was best described as a Kool-Aid Blue.   Even though it might look inviting, don’t let it fool you.  The water is glacier water, and for this reason the water has this wonderful color.  However, the word glacier generally connotes freaking freezing.  It wouldn’t be hard for you to guess that we were the only crazy tourists who decided to take a dip in Lake Louise.  The Asian tourists were busy taking pictures of the “Crazy Idaho Boys” who were swimming in the lake.  After the refreshing swim the drive was short until we arrived at the town of Banff. 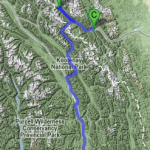 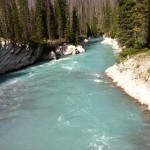 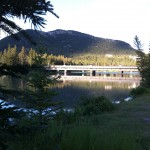 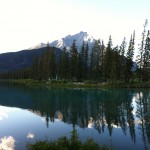 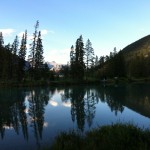 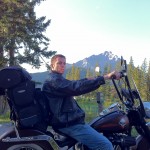 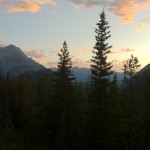 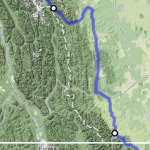 Banff to Kalispell via Glacier 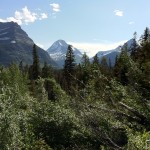 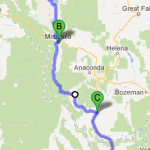 Dinner was an Irish pub where we ate many varieties of shepherds pie.  The atmosphere was accurate and the food was outstanding.  A band played authentic Irish music as we ate our meal and reviewed the day.  Banff Reminds me of Jackson, Wyoming.  Don’t plan on going there without booking your hotel first.  We got burned and ended up paying tons of cash for a five star hotel. 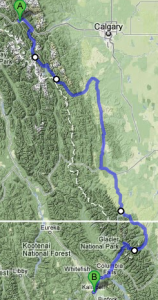 Banff to Kalispell via Glacier

I might be giving you the idea that it can’t get much better, but somehow it did.  Day four was incredible.  We continued to pass through amazing mountains, high valleys, and green scenery.  The Canadian highway 40 is one that cannot be missed.  I’ve never seen so many Lance Armstrong candidates like I did on that Sunday.  They must have all had the day off of work and spent the day riding up hills and dropping down valleys.

Leaving the mountains was a refreshing taste of home for me.  Mountains are always in the distance, but wide open spaces.  Once we got closer to Waterton National Park things got more exciting.  Crossing the border was rather uneventful other than the mother black bear and her three cubs.  The Customs official mentioned that those were the only Canadians that he allowed to cross the border without checking their passports.  We watched them for about 20 minutes as they rustled through the trees and scraped the bark. 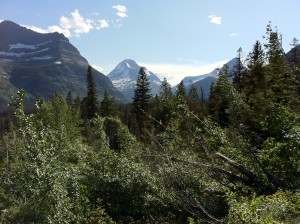 Glacier National Park is another piece of the BAR that will take your breath away.  The speed limit is between 25-50 so this was the only portion of which I rode without a helmet.  I realize that I could get killed at any point even going 25, but it was worth removing them helmet to experience Glacier.  We stopped for a moment at the top of Mt. Logan to survey the land.  We began our ascent to the peak, but the looming sunset required us to saddle back up on our bikes to ride into Kalispell for the night.

Luckily Brad used the “wink at the front desk attendant” to find us a good deal on a hotel in Kalispell.  Although it was only a Super 8 they gave a great deal.  It came with breakfast and we were all able to split it amongst the four of us. 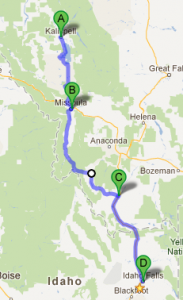 The last day was the longest of the ride.  We had to get from Kalispell to Idaho Falls in one day.  We made sure to drive on the East side of Flathead lake so we could purchase cherries from a local stand.  During the early summer the flowers on the cherry trees bloom and in August you can buy the most fresh cherries ever.  They are to die for and I wholeheartedly recommend everyone to goes to Glacier in August and they purchase some delicious cherries along the way.

The weather was incredible and the ride was beautiful.  We stopped at a few gas stations for hot dogs and Red Bulls (The perfect riding food) and continued from Missoula to home.  Instead of following the exact same road home, we took a small detour to visit a couple of sites along the way.  The Western United States is famous for hot springs.  If we would have had more time it would have been amazing to stop at the Lost Trail Hot Springs, or the Jackson Hot Springs.

The Big Hole National Battlefield was one of our stops on the way home.  It was a gloomy feeling as we learned about the Nez Pierce and how we corralled them up like cattle and gave them some of the crappiest land.  It was a total bummer what we did to them as a country.  It was a great educational event.  I would recommend it to anyone.

We also did a quick detour to visit Bannack, Montana.  In the days when Montana was a territory it was the first capital.  Today is a well preserved ghost town and provides a taste of what it might have been like in the late 1800’s.

The rest of the ride was Interstate 15.  Fortunately it was the only part of the interstate that we had to take on the entire trip.  With a motorcycle ride it is almost always better if you are on your own without the freeway.

Overall the BAR was a great success.  We all had an incredible, and safe trip across the Rockies.  For anyone who hasn’t done something like this, you are really missing out.  It isn’t airline travel, but it will take your breath away.