The absolute best hotel promotion that ended in December is making a surprise comeback.  Somehow they are going to be doing this again and I can’t wait to get my paws on this deal.

All of the details are still unconfirmed, last time you could scoop up an EASY 50,000 Club Carlson points for a single night’s stay in any Radisson or Radisson Blu hotel.  Our quick weekend trip to Salt Lake City was a great success as we stayed two nights in the Salt Lake City Airport Radisson on North Temple. 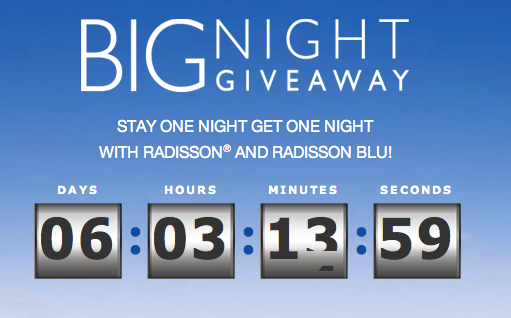 This promotion doesn’t even require a credit check of any kind.  All of our Wanderlusters out there should sign up for this promotion and then make it happen that they get their 50,000 to cheapen their next vacation.

1. Sign up for a new account with Club Carlson.  More than likely you haven’t heard of this loyalty program, but it includes Radisson, Radisson Blu, Park Plaza, Park Inn, and Country Inns and Suites.  They have locations all across the US and many hotels in other countries as well.

2. Register using the RadissonBigNightGiveaway link after 12:01 CDT on May 15th.

3.  Stay a night in a Radisson or Radisson Blu hotel between May 16th and July 15th.  You must pay for this hotel, but hopefully your Radisson is a reasonably priced room so you can make the most of this offer.  Depending on where you would like to stay this thing can be worth three free nights in a category 2 hotel or four free nights in a category 1 hotel.  Even if you end up getting two free nights out of this deal it is still worth it.  You essentially pay for one night and get two free.  That is a bargain!

Also remember that you can register for yourself, and register for a spouse.  Last time this offer came around we both booked a room night after night.  In the morning I checked out and my wife checked into the very same room.  We were both able to pay for one night and get 100,000 Club Carlson Gold Points.

How it Worked for Me 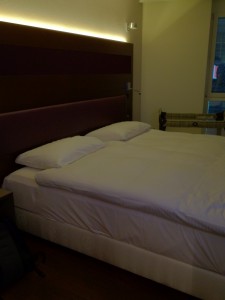 As you well know we took an unforgettable trip to Europe at the end of April.  I’m still sad that I didn’t get more time to soak in the experience, but you have to come down from a high at some point, right?  When we were looking for a hotel in Zurich we found that they all ran about $200 per night.  Ouch!

Because I had a few Club Carlson Gold Points stashed away from my previous Big Night Giveaway we found a Park Inn by Radisson right by the airport that would use 38,00 of my Gold Points.  Obviously it was a bummer to use up so many points in on stay, but it did save me $200.

Not only did it save me $200, but I still have about 15,000 points left so I can get one more hotel that is a Category 2 hotel for free on points as well.  So I turned $68 from the Salt Lake Radisson into another $300 probably.  Talk about pulling a bunny out of a hat!

I’m really looking forward to this promotion from Club Carlson.  Like I previously mentioned it is one of the most lucrative non credit-card wanderlusting activities that you can do.  Having a fun weekend getaway at the hotel can be fun anyway.  Swimming in the pool and sitting in the hot tub are always favorites of the kids.  Although most Radisson’s don’t include breakfast, you can usually find an Egg McMuffin close by.

So, are you going to score an easy 50,000 Club Carlson Gold Points this time around?

3 Responses to Return of the Radisson Big Night Giveaway