My Review of the Kelty Kids Pathfinder 3.0

As we were preparing for our trip to Europe we knew that we would need some way to transport our son as we saw some of the sites. We brought along his car seat as it was necessary for the drive, and a small stroller in which his car seat could click into, but that wouldn’t work in all of our locations. We looked at quite a few child carriers, but finally decided on a closeout product from Kelty called the FC 3.0.

We purchased the bag from a local retailer and were excited to test it out. As I read more about it online I saw that many people had been complaining because it has an adjustable waist strap that would slip, thereby putting all of the weight of the pack on your shoulders and not on the waist. As you could imagine this would be rather bothersome. We purchased it well in advance of our trip so we could test it out and make sure that everything would work out great. Well, in our second time trying it out the waist strap slipped twice. I knew that this wouldn’t be acceptable for our long journey, so I called Kelty and reported the problem to them.

The customer service representative was VERY helpful. He addressed that the FC 3.0 was having some issues with a slipping waist strap and asked for me to send him a few pictures identifying the backpack. Once that had been completed he requested that I cut the shoulder straps (thereby ruining the bag completely) and he would send me the more updated model of their backpack called the Kelty Kids Pathfinder 3.0. 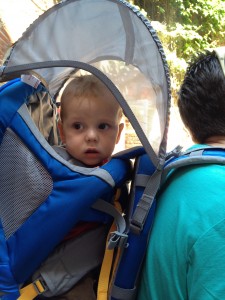 Max in the Pack

The day that I cut the straps, he sent out the new backpack. When it arrived I was excited to see its features. I looked over the bag and noticed that almost everything was the same. It did have some changes from the previous model, but for the most part it was the same. I watched a Youtube video that talked about the features of this bag.

Before we set off on our voyage my wife conducted a little bit of surgery as the new model had added a pouch for a camelback, but at the same time had severely decreased the amount of foot room that our little guy had from the previous model.  This gave him the chance to still keep his legs inside the backpack, yet didn’t force him into a small space.

The Pack in Action

The backpack was a lifesaver.  Max was so happy in the backpack and it was nice for him to get a change from just the car seat.  We already had planned a good amount of driving, so any chance we could get him out of his car seat and into the backpack we took the opportunity.

In Venice you are constantly going over bridges and down stairs as you walk across the island.  Although I did see a few strollers, that is a complete nightmare lifting the stroller up and down every set of stairs on the island.  It was really simple to have Max in the backpack and to carry him everywhere.  It also helped me burn off a few more calories from all of the pizza and gelato that I ate.  (More to come on this)  I really didn’t mind carrying him in the backpack, and Max really enjoyed it. 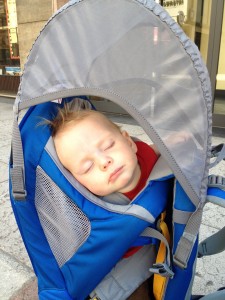 In fact, there were times that he was able to snooze in the pack as we walked.  When you’re tired and the gentle sway of each step might be soothing to you.  When we were up late one night in Venice he just slept in the bag and quite enjoyed it.  He didn’t hold his neck after waking up, but some people tell me that kids are made out of rubber.

I am not sure that I’d pay the retail $249 for this pack, but it has some great features that make it very useful.  We are excited to put this bag into action with some day hikes this summer, and hopefully in the future with more trips.

It was a bummer to burn a checked bag with this carrier, but it saved us from having an angry child.  Carrying the pack was much easier for the castles that weren’t ADA friendly.

I would totally recommend it to anyone who travels to places where strollers are inconvenient.

Get your own British Airways card that can help you take your family to Los Angeles.

8 Responses to My Review of the Kelty Kids Pathfinder 3.0