United’s Response to My Complaint

As most of you know I had to write a complaint to United Airlines for their crappy service on my recent flight with them.  It was my first time on their airline and they left a bad taste in my mouth. They delayed my flight by a few hours, which made me spend less time with a good friend from high school and I missed the first half of the Super Bowl.  You can read about my complaint letter to United airlines from my previous post, and this was their response. 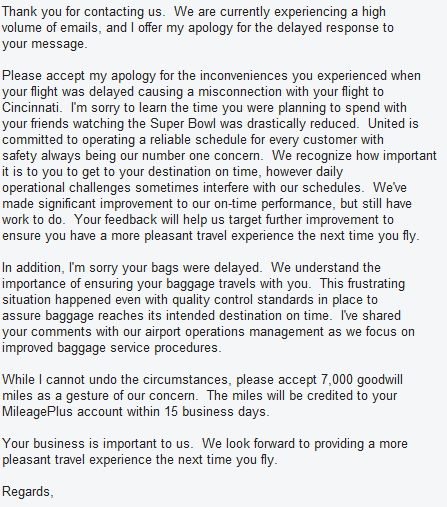 I requested that they give me a flight voucher to give them another  try, but they rejected that request and left me with 7,000 miles.  That equates to almost a fourth of what I had requested of them.  I’m not sure if that is their normal ratio of how much they give based on your request, but I truly felt like my request was merited.  They totally blew it and it was my first time with them.  I’ll take the 7,000 miles gladly, but am rather disappointed that they didn’t hand over the voucher.

When American Airlines made us late as a result of a mechanical problem on a plane they gave me 10,000 AAdvantage miles for that complaint.  You never know what you can get unless you look into it.  If the airline makes your life a living hell, make sure you let them know.  They sometimes will hook you up with stuff to make you feel better.  Although I’m bummed that they gave me only 7,000 Mileage Plus Miles for the problems it is still 7,000 miles more than I had before writing the request.

Let’s go through a few steps on how to write a successful complaint to an airline.

You’re not always going to get what you ask for from the airline as a result of the complaint, but you might get something, which is much better than nothing. Here are some links to each of the largest airlines in the United States.  Use these links to submit your complaints.

We would love to hear your success stories of complaining and the points or vouchers that you’ve received.  Leave us a message and let us know how you made off like a bandit!

This entry was posted in United and tagged airline compain, customer service. Bookmark the permalink.