Guest Wanderluster Aly: My trip to DC and NY 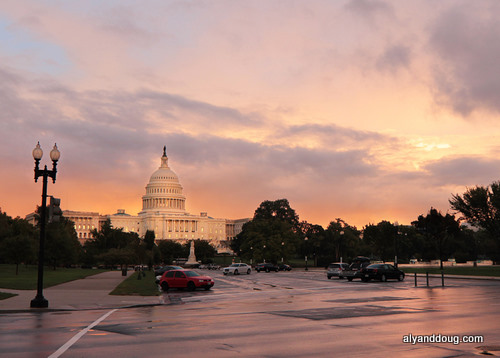 I was reading a Dan Brown book some months back and came across something that struck me. At one part the main character, Professor Langdon, is lecturing his class and asks them who had visited Europe. A substantial number of students raised their hands. Then he asked how many had visited our nation’s capital, Washington DC. The response was a lot less. Langdon goes off into some rant about about patriotism and our nation’s rich history and how it’s a shame that a lot of people have never even been there but have been to countless other countries.

Well, I was as guilty as the fictitious students in the story were and my husband, Doug, and I decided we needed to remedy that and make a trip back east. We love to travel but typically end up abroad on our adventures. In fact, last year at this time we were living in China and planning our trip through Thailand.

Wanderluster, Brad, who was taking his trip to Columbia with his entire family in tow. As our conversation progressed he told me a bit about getting and using sky miles oldier.The best part about DC, besides how beautiful it is, is (something I’d never done before). Brad asked about how we got to and from China. I looked at him sheepishly and told him we had just paid for our tickets out of pocket. By his reaction I could tell it was time to learn about sky miles! Long story short, we signed up for a Continental credit card and got enough miles to fly round trip from Idaho Falls to DC for free!

ing in all we could before our train ride up to NYC. We had a tour of the Capital, the Library of Congress, Ford’s Theater and the White House. The next day we went to the National Archives and were able to see the Declaration of Independence, Constitution and Bill of Rights. We made it to Arlington Cemetery before closing time and were able to catch the changing of the guard over the tomb of the unknown show practically everything is free. Makes for good site seeing for frugal wanderlusters.

We got up early on the 4th day and caught our train to New York City. (I love riding on trains and wish

we had that option over here). NYC, on the other hand, was not exactly cheap for us, we splurged quite a bit. However, there are a lot of frugal options as well. For example, we got into The Late Show with David Letterman which is free and nothing beats watching a live filming, we loved it. We also got tickets to get into the 9/11 Memorial which we later realized how lucky we were to get in and it was so worth it. We caught a couple Broadway shows which were not exactly free, but hey, we were in NYC! Just walking around the city and through Central Park was a lot of fun for us and can be free if you can stop yourself from buying food off the street vendors and from the plethora of stores on every corner. One thing we quickly learned is that you can’t see NYC in three days. We’ll be back again for sure.

We had such a good trip and what made it even better was knowing we’d gotten there for free! We’re currently working on racking up our Starwood points to use on hotels when we take our next trip abroad with the 100k miles we scored on the British Airways card thanks to Worldwanderlusting!