Let’s be honest, this wasn’t a huge surprise.  American Airlines is the third largest airliner in the world.  The other two that are larger and some that have been smaller all have been through this process before.  Here is an excerpt from the letter that was sent out from American Airlines’ AAdvantage program. 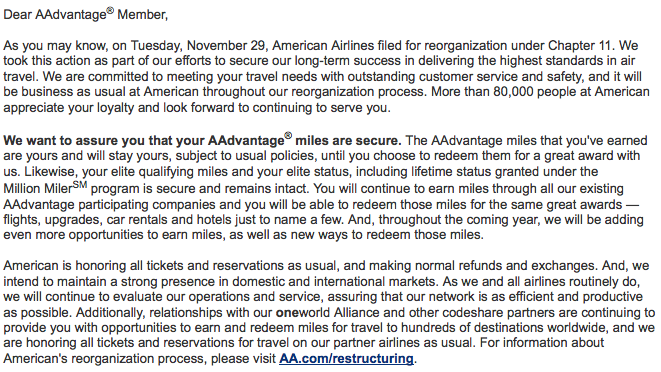 I look at the financial situation of American Airlines and I see that their two biggest problems are the unions who have such high demands on the company as far as labor costs, and the recent increases in fuel charges as their concerns.

The AAdvantage program is actually a pretty good moneymaker for American.  They are able to sell their miles to lots of companies like Citi, which gives them working capital.

Should I Use My Miles Up?

I’ve still got an arsenal of AAdvantage Miles and I am not too worried.  (For one I didn’t pay for them) I plan on booking a trip soon so I can get some of them used up.  I don’t see them going down the tube as much as I potentially see them getting devalued.

Let’s face it, they are the best airline to use when booking flights to Northern South America, Central America, and Europe.  All of the other airliners have devalued their miles, so I wouldn’t be surprised if they do it here too.  I think that you should try to book a trip, or gift the miles, but I would be really surprised if they completely disappeared.

Keep in mind that the largest holder of AAdvantage miles is probably Citi.  They have been partners for years and I don’t think that AA would try to leave Citi in the dust.

Why not start accruing miles with another carrier today?

United, Delta, Continental, and US Airways all have good cards.  You can see most of them on the sidebar.

Chase Ultimate Rewards is another great way to accrue miles.

This entry was posted in American Airlines, Citi. Bookmark the permalink.