I’ve been to the Guggenheim Museum in Bilbao, Spain.  I’ve seen the original Rembrandts in the Rijksmuseum in Amsterdam.  I’ve wandered through the national gallery in London, and yet the museum I visited last week tops them all.

On January 1, 2011 at 11:11 am, the Dali Museum was opened to the public in St. Petersburg, Florida.  True to form, the building itself is essentially surrealist art, and the pieces that it houses had me so far beyond captivated.  Admittedly, I’m not much of an art fan, but to whom doesn’t Salvador Dali provide some intrigue?  I mean, the guy wore an incredible upturned moustache and walked with a cane… he painted melting clocks and emulated almost every style of art.  He’s like the Pink Floyd of paint… a puzzle in an enigma, wrapped in a shroud… and his finest works are on display in St. Petersburg. 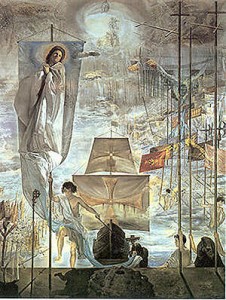 All of the pieces had some interesting features, but the one that I really latched onto was the massive tribute to Columbus which Dali was commissioned to do for the opening of a museum of modern art in New York.  When the museum failed before it ever opened, the painting went up for auction, and Dali insisted that his friend Albert Reynolds Morse purchase the painting to keep it from selling to someone in the Far East.  When Morse resisted, Dali told him that he’d have a third party re-purchase it later on, but it was pure deception and Dali had never intended for anyone else to come along and buy it.

The painting is, as with all of Dali’s works, full of symbolism and hidden imagery.  Countless references to Roman mysticism, along with Christian dual-meanings and Spanish heritages infiltrate the painting, not to mention Dali’s traditional self-insertion.  Dali even went so far as to place the “sea urchin” at the base of the painting in a prophetic reference to a future event to take place – man’s visit to the moon.

If this were the only interesting painting in the entire place, it would have been worth a visit, yet Dali has four or five enormous paintings with compelling stories and hidden artifacts, and countless smaller works.  I can’t recommend this place highly enough.  Even if you have a hard time appreciating the genius of someone who lived in a world of rhinoceros horns and nuclear mysticism, I think you’ll leave the Dali museum with a sense of awe.

Also, if you’re in St. Petersburg, I have to recommend an eclectic Mexican restaurant called “Red Mesa.”  It’s become an annual tradition to visit the place because it never disappoints.

If you’re new to WorldWanderlusting, please take some time to browse around the site.  We hope you’ll like what you find.

This entry was posted in Fun Travel Stories and tagged dali museum, Salvador Dali, things to do in St. Petersburg. Bookmark the permalink.

1 Response to The Dali Museum in St. Petersburg, FL