My Super Cheap Trip to Roatan

If you’ve already been following our blog, you’ll remember that I was just bragging about booking an open-jaw flight into Honduras that I booked for $25 and 35,000 Delta Skymiles.

I went to link up with a friend and to do some scuba diving.  As is becoming customary, a nasty autumn snowstorm sent me skipping to the airport.  I’ll admit that it wasn’t the greatest flight arrangement, but it did enable me to watch the first half of the Boise State game on the in-seat TV en route to Atlanta.  At the risk of exposing my cheapness-insanity, I’ll confess that I slept in the ATL airport.  If I was with anyone else, I would have ponied up for a room, but it was already late and it just made sense.  Plus, I was comforted by the stories I read on www.sleepinginairports.net. A borrowed blankie from my first flight and my backpack for a pillow, along with an over-the-counter sleeping pill helped me pass the night in relative comfort.

My flight into Tegucigalpa was among the most interesting I’ve ever been on.  TGU has a short runway that is in a “bowl” in the mountains, and it’s surrounded by residential areas.  From what I understand, only very experienced pilots can land there, and as we came in for landing, I understood why.  We basically corkscrewed in and were banking slightly right up until we hit the tarmac.  All the while, I could almost see into the surrounding housing… the wind from the jet seemed to help with the drying process of clothes out on the lines (as if the hot Honduras sun wasn’t enough).  I met up with my friend there and took a short domestic flight out to the island.

The next day we started our $40 dives with a charismatic former Canadian firefighter for our divemaster.  He took us to a divesite called “Hole in the Wall,” where we essentially did some underwater rock-climbing.  In the warmest ocean water I’ve ever been in, we swam through underwater canyons and caverns in the reef… poking in on the variety of colorful marine life, and marveling at the sight of peering up through 110 feet of clear, blue water. 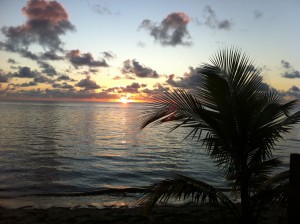 That afternoon we took a water taxi to check out West Bay, where they hold a weekly hermit crab race that has all the makings of a horse race, including the gambling, but with the added benefit of supporting local charities.  A beachside BBQ, an amazing sunset, and a UFC fight on satellite TV completed our night. 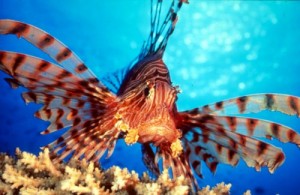 Two more dives the next day took us through more underwater scenery.  We found a sleeping sea-turtle, some monstrous lobsters, and colorful sponges galore.  On the second dive, we came across a few lionfish – a non-native species of fish with poisonous spines and no natural predators that they fear will overtake the Caribbean.  The policy is “shoot-on-sight,” and the were actually holding a lionfish derby that day, but our divemaster had his spear stolen the night before and we were weaponless.

That night we partook in the fruits of the lionfish derby – a lionfish cook-off held by five local restaurants.  For 100 honduran lempiras ($5), we had an array of fish tacos, blackened fish, ceviche, fish cakes, and coconut-dipped fish balls.  I’m not much of a seafood fan, but every single item was beyond delicious.  After we’d filled up our bellies, we passed up the local dance scene to watch the Detroit Lions in a bar with some fellow fantasy footballers.

Stay tuned for the continuation of this post… I’ll tell you about diving with sharks and the Honduras vs. Jamaica soccer game.

In the meantime, here’s how you can start to put together some FF miles by applying for credit cards.

4 Responses to My Super Cheap Trip to Roatan