The moment before the flight was a little tense for me as I prepared for my first redeye with my newborn son.  I felt like everyone was giving me the “death stare” as I boarded the plane.  I’m sure that they were all thinking, “This guy brought his kid?  Now I’m not going to sleep at all!”  I even purchased some earplugs in case the people around us had to listen to a crying baby. 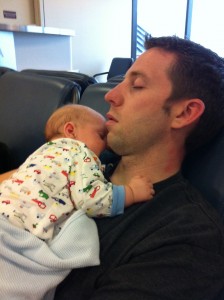 I took every precaution possible by bringing along his binky, preparing with some tylenol for children, and the earplugs.  My main purpose was to have him sleep on my lap and to make sure that he took his binky during the takeoff.  I figured if I helped him by putting the binky in his mouth it would help him to pop his ears.  Either this kid is an angel, or his ears popped just fine.  (I’m pretty sure it is both) He did just fine and slept through both of the flights without a problem.

Mission accomplished!  I feel like bringing him along for this trip has been great.  He has been eating fine, flying fine, and very tolerant of long trips in the car.  We definitely had to recuperate by sleeping in the airport during our layovers, and crashing very early at our hotel, but it has been great. 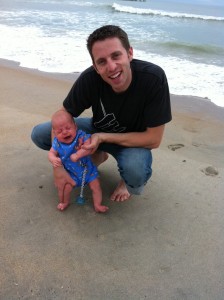 I love this picture of Max

His first trip to the ocean was captured perfectly with a camera. I was really excited to bring him there because I felt like it would be fun to swim with him in the ocean.  I guess that I didn’t suspect that he would be so disappointed at the temperature of the ocean.  He cried for a few minutes after having just his feet in the water.  I guess that I’ll have to wait to swim with him in the ocean until he gets a little bit older.

My car rental was a bit of a bummer.  I had searched online at Priceline, Hotwire, and Expedia, but all of the responses seemed disappointing to me.  Priceline wanted me to bid basically at the same price that Expedia was offering.  I wasn’t willing to do that because Priceline still has charges that would get passed along to me and it might have even made the costs higher than the ones on Expedia.  I decided to show up at the airport and attempt to rent a vehicle in person to see if the rates were any better.  Luckily at National I was able to rent that car for $40 less than the online price.

I know that the airport was a little smaller, and I’m not sure if that had something to do with the reason that Priceline.com wouldn’t budge on their prices for car rentals.  Last time I was able to get a rental for a much more reasonable rate on Priceline.com, so I’m thinking it was the smaller location.

Our hotel in Jacksonville was tough to do.  I notice that everyone who was bidding on Priceline.com was getting the Days Inn or the Ramada from betterbidding.com.  These hotels had horrible reviews about the carpets and the bedspreads.  These are two of the most important items in a hotel room for me.  I decided to do some shopping like we all used to have to do before the Internet.  I dropped into a few different hotels and everyone wanted $110-140 per night.  I couldn’t believe it.  The other thing that was incredible is that all of the hotels were full.

I decided to check one last hotel and found a great one.  It is called America’s Best Value Inn, and it was only $83 per night, which was about $17 cheaper than the next cheapest option.  This hotel has recently been remodeled and it has new carpet and a new bedspread.  I also found that the shower was rather clean, which is also important to me.  I realize that this hotel isn’t a Marriott, but if it saves me $70 for the two nights, and that is worth it to me.

I realize that I’m not accruing a lot of new points on this trip because I’m staying in hotel chains that don’t accrue points very well.  At this point I only have points with Starwood, and there aren’t any Starwood Hotels in this area.  Next time I’ll be more prepared by having some Hilton and Marriott points so I don’t have to pay for those hotels in the future.  That is the power of having multiple accounts with many hotel companies.

We don’t have the rest of our trip planned out, but I am eying the Aloft Airport hotel, which is in North Charleston.  It is a Starwood property and it would only cost me 3000 Starpoints.  I’m pretty sure that we will hit that up for Sunday night.  I guess I’ll let you know as we decide.