In the summer of 2006 I took an amazing trip across the world.  I had the opportunity to visit Russia.  It had always intrigued me the fact that they had been communists, and that they had semi converted to capitalism. I really enjoyed the food, people, and the sites. What an incredible place to visit. It is not very English friendly though. 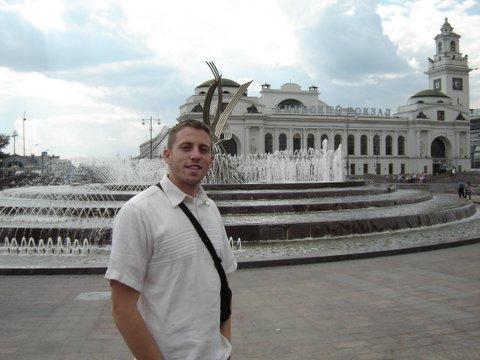 Nothing is written in English, so if you are going alone to Russia as a wanderluster, then I recommend that you pick up a book on the Russian alphabet. After studying for a few hours I could slaughter my way through almost any word. Their words seem to be much longer than ours, but that is just my opinion. I found it very fun trying to pronounce words in Russian in most places that I went. I found that many things are similar sounding to ours. I remember visiting a huge plaza and reading the word Geology on the side of a building. I couldn’t show you how to spell it in Russian today, but I was able to pronounce enough at the time to be able to see that is what the word meant.

I also found that a restaurant is similar, as is metro, and lots of other words. It because a challenge to me as I struggle to learn how to pronounce their words. It is a rather difficult language, and I didn’t learn how to speak anything but bathroom, water, etc.

Standing in Red Square gives you an incredible feeling. It feels as though you are in a 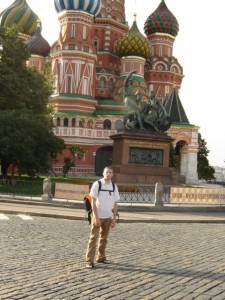 Me at St. Basil's

storybook. You can look in any direction and see a building that will blow your mind architecturally. Russia has some very beautiful buildings. On one side of the square you can see St. Basil’s Cathedral. This is the “Ice Cream Cone” building. Then you can see Lenin’s tomb with the Kremlin towering in the background. The Red Armory museum is an iconic structure that faces the cathedral. The famous shopping mall lines the the last remaining side to completely enclose you in history.

I had been in Russia for nearly four days when I visited the square at dusk. It had been four days of quietness on my end and lots of jumbled words I didn’t even know from everyone else. As I marveled at the beauty of the moment I heard something coming from behind me that came in full clarity. I didn’t know how, but I finally started to understand what people were saying. The clarity welcomed me with the feeling of seeing an old friend. When I spun around to see why it was so clear to me I found that a Spanish tour group. The leader of the group was explaining in Spanish the history of the buildings and their significance.  It was incredible because I didn’t even notice that it was Spanish when I first heard the voice, but it just felt so good to hear something that I understood.

Languages are a big part of a culture.  I know it feels like a daunting task, but learning just a few words in someones language can impress them.  I know that my efforts to learn Guarani always impressed the Paraguayans.  Learning Basque for Brad opened doors in Spain that never would have otherwise opened.  When you make an effort to learn someone’s language it makes a difference to them.

Make it a goal for your next trip to learn some of the language for the place that you visit.  It will pay you back as you see the faces of the locals light up.  It is a fun experience.